AL-KAFI #1490: THE RULING OF OFFERING AND ANSWERING SALAM TO A PERSON WHO IS EATING 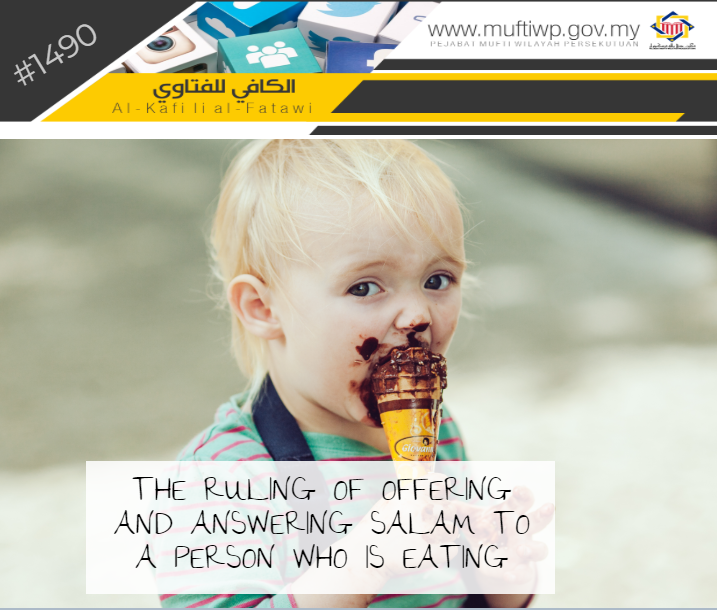 Assalamualaikum ustaz. I have a question, I was eating at a food stall and my friend came and give salam to me, but my mouth is full of food. Is it obligatory for me to answer his salam?

Salam is an offering of peace and its purpose is to honour our Muslim brothers. The usual utterance of salam are assalamualaikum, peace upon you and other greetings. Allah SWT states:

“And when you are greeted with a greeting, greet [in return] with one better than it or [at least] return it [in a like manner]. Indeed, Allah is ever, over all things, an Accountant.”

In commenting on the above verse, Syeikh al-Sa’di said in his book: The utterance of salam is an utterance of honour and it is answered by the person who is honoured and prayed for goodness. (See Tafsir al-Sa’di, 1/191)

The Ruling of Answering and Giving Salam

The original ruling of giving or offering salam is sunnah and this is the opinion of madhhab Maliki, Syafi’e and Hanbali. As for answering salam, it is wajib and if the salam is given to a group of people, then it is fardhu kifayah. (See al-Mausu’ah al-Fiqhiyyah al-Kuwaitiyyah, 25/161)

Furthermore, Imam al-Nawawi in his book stated: The ruling to start or give salam is sunnah muakkad… as for answering salam it is fardhu or wajib according to the consensus of scholars. If a person A gives salam to person B, then it is wajib for person B to answer it for it is fardhu ain. While if a person gives salam to a group of people, then answering the salam is fardhu kifayah. (See al-Majmu’ Syarh al-Muhazzab, 4/493-494)

Furthermore, you can refer to other articles in the Mufti of Federal Territory Office official website:

In the situation where a person is busy with something such as reciting the Quran, dhikr, eating and in the bathroom, the jurists divided it into several situations:

In this issue, Imam al-Nawawi in his book said “if a person is urinating or defecating, having intercourse and other similar situations, then it is makruh to give salam and it is unnecessary to answer it. The same for if the person is sleeping, sleepy, praying, calling the adhan or others, then the salam did not affect him. In a situation where a person is eating and there is food in his mouth, then it is not necessary to answer the salam, but if there is no food in his mouth, then it is permissible to give salam and the salam is wajib to be answered.” (See al-Azkar li al-Nawawi, 1/415)

Coming back to the above question and evidences presented, then the following can be concluded:

Thus, in this matter, the person intended to give salam should consider the situation the person he is offering the salam to, as to not disturb him.

May Allah SWT give us the sahih understanding in His religion and guide us to practise His commandments.