AL-KAFI #1493: THE RULING OF THE UTTERANCE OF ISTIRJA’ 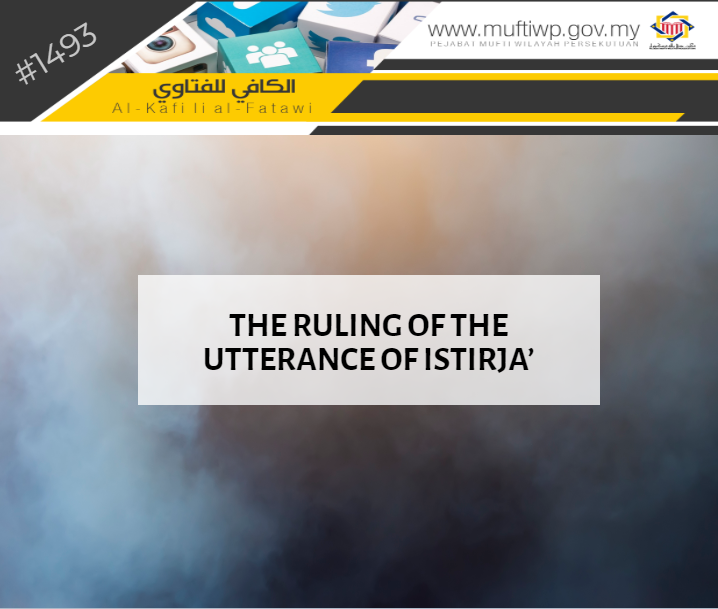 Assalamualaikum SS Datuk Mufti. I want to ask is it permissible to utter istirja’ for creations other than Muslims such as the disbelievers and animals? Hope for an explanation from Datuk Mufti. Thank you.

And We will surely test you with something of fear and hunger and a loss of wealth and lives and fruits, but give good tidings to the patient. Who, when disaster strikes them, say, "Indeed we belong to Allah, and indeed to Him we will return.”

In this verse, Allah SWT explains that He tests His slaves in times of happiness and sadness and all of them (those who are tested are from among His slaves) will receive the rewards from Him if they are patient. They would, in turn, utter the istirja’ as proof of their patience and gratitude. (See Tafsir al-Maraghi; 1/467)

Thus, it is the guidance revealed through the Quran when we are faced with a calamity (death), then the attribute of those who are patient are those who utter the istirja’:

"Indeed, we belong to Allah, and indeed to Him we will return.”

Hence, it is clear that every mu’min is encouraged to utter the istirja’ when he is tested with a calamity, regardless of whether it is small or big (death). Imam al-Nawawi said that it is sunnah to utter it for the Prophet PBUH instructed us to utter it and it is also stated in the Quran and ijma’ muslimin. (See al-Minhaj Syarh al-Nawawi ‘ala Muslim; 6/220)

Imam al-Qurtubi stated in his commentary, calamity is anything that falls on humans that would hurt them. (See Tafsir al-Qurtubi; 2/175). It should be understood that here, istirja’ is not only sunnah to be uttered when there is a death but it is for any matter or situation of which is hurtful for humans. This is strengthened with the words of the Prophet PBUH:

From ‘Ikrimah RA, once the Prophet PBUH’s lamp was blown out. The Prophet PBUH said: "Indeed, we belong to Allah, and indeed to Him we will return.” Then a person asked him: “Is this also considered as a calamity o Messenger of Allah?” he answered: “Yes. Anything that hurts a believer is a calamity.”

(See Tafsir al-Qurtubi; 2/175 and the meaning is sabit in al-Shahih)

Thus, it is sunnah for every Muslim to utter istirja’ when they are faced with any calamity or tested with trials or tribulations. The reason is there are several wisdoms behind it which includes the acknowledgement of the oneness of Allah SWT, belief in the hereafter (a place where all humans return to), depending and placing one’s trust in Allah SWT hoping for rewards from Him. (See al-Mausu’ah al-Fiqhiyyah al-Kuwaitiyyah; 3/281)

Istirja’ for the Death of Non-Muslims

The next question arises from the verses (surah al-Baqarah: 155-156). According to commentary scholars, it is specific for believers, which means the utterance of istirja’ is only permissible for Muslims (See Tafsir Ibn Abi Hatim; 1/263). Thus, is it permissible to utter istirja’ when a non-Muslim die?

Basically, istirja’ itself means every human being belongs to Allah SWT. Imam al-Qurtubi said through his commentary: The phrase ‘Inna lillahi’ is the tawhid and acknowledgement of ubudiyah (our status as slaves) and the authority of Allah SWT. While the phrase ‘wa inna ilaihi raaji’uun’ is our acknowledgement that we will all be ruined and resurrected from our graves, as well as our firm belief that every matter will return to Him, as all of these are His. (See Tafsir al-Qurtubi; 2/176)

According to Syeikh Ibn Baz: If a disbeliever passes away, it is permissible for us to utter istirja’ even if the non-Muslim is not among our friends or family members. The reason is every human will return to Him and every human is Allah SWT’s. However, it is impermissible to pray for them or supplicate for their forgiveness as long as they do not return to the path of Allah SWT. (See Fatawa Nur ‘ala al-Darb; pg. 375). This matter is strengthened with the statement of Allah SWT:

In this verse, the prohibition for Muslims from asking for forgiveness for the disbelievers. This is stated by Imam al-Nawawi:

“As for prayer for them and supplicating for their sins to be forgiven, then it is haram according to the Quran and ijma’.” (See al-Majmu’ Syarh al-Muhazzabb; 5/144)

Istirja’ for Death of Pets

If a Muslim has farm animals such as goats, cows, chickens and others, then one of the animal dies, then it is a form of calamity for him on his property. Thus, it is permissible for him to utter istirja’ because of this. This is according to a general hadith of the Prophet PBUH, a narration of Ikrimah stated in the previous paragraph.

As for prohibited animals to be reared or the death of an animal that does not affect him, for example, the death of another person’s pet or wild animals, then istirja’ is unnecessary. However, if the death of the animal serves as a reminder for him that every creation would return to its Creator. Then in this situation, it is permissible for him to utter istirja’ for it is a form of remembrance that is permissible according to syara’.

To conclude, as a Muslim, a person should have patience when tested with calamities, whether it is small or big, then it is sunnah for us to utter istirja’ when we are faced with the tests of this life in terms of property, lineage or life. Thus, if a Muslim dies it is sunnah for us to utter istirja’. It is permissible to utter istirja’ when there is death even from the disbelievers or animals, for we utter it as a reminder and a form of remembrance for himself about the authority of Allah SWT and that everything will return to Him when the time comes. Lastly, we pray that Allah SWT will grant us all husnul khotimah (a good ending) in this life and that Allah SWT will grant us a firm faith and stand in Islam. May Allah SWT accept all our worship insyaAllah.