AL-KAFI #1494: THE RULING OF SLEEPING DURING FRIDAY SERMON 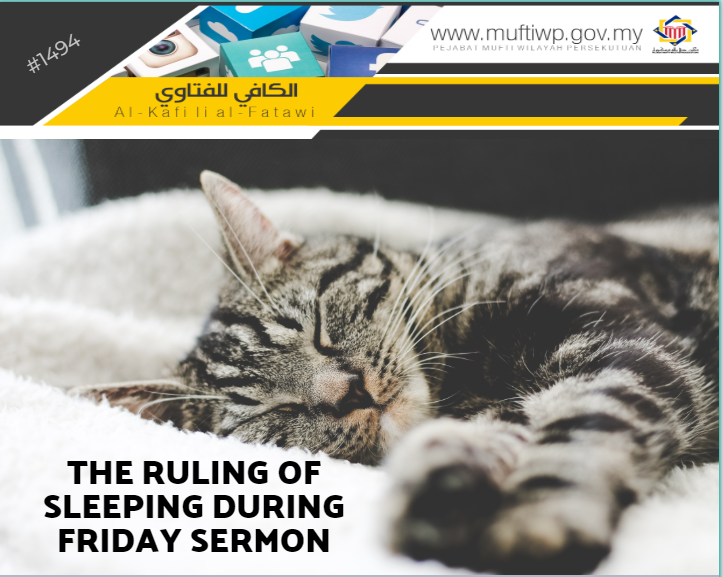 Assalamualaikum w.b.t. I would like to ask S.S Mufti. Nowadays, we often see many people sleeping during the Friday sermon. Is this condition also categorized under lagha actions?

Listening to the Friday sermon is a commandment. Even if the jurists differ on its ruling between wajib and Sunnah, but it is still a commandment and a prioritised act for those who come for Friday prayer.

Basically, there are two general things which make someone’s Friday prayer considered lagha. We detail it as follows:

Any saying and word happen during Friday sermon will make the doer becomes lagha. This is in accordance with a hadith narrated by Abu Hurairah RA where the Prophet PBUH said:

"When the Imam is delivering the Khutba, and you ask your companion to keep quiet and listen, then no doubt you have done an evil act."

The above hadith is a dalil that any saying even in the form of amar ma’ruf (commanding good) and nahi mungkar (preventing bad) is prohibited during the sermon which also makes the doer becomes lagha. And the definition of lagha according to the scholars is as follows:

Also, according to the above hadith, dalalah al-muwafaqah (harmonious indication) leads to the prohibition of speaking during the sermon. Even the saying of “silence!” which is a form of nahi mungkar is considered as lagha. Hence, sayings other than that are greater to be considered as lagha.

Any movement and doings which make attention and focus being lost from the sermon will also cause someone to be considered as lagha. This is based on dalil as narrated by Abu Hurairah RA where the Prophet PBUH said:

He who performed ablution well, then came to Friday prayer, listened (to the sermon), kept silence all (his sins) between that time and the next Friday would be forgiven with three days extra, and he who touched pebbles caused an interruption.

According to the above hadith, it can be understood that the action of playing around with small stones during the sermon is prohibited as well as causing the doer becomes lagha. The application is expanded to other actions which also distracts one’s attention and focus from listening to the sermon. This is like playing with handphones, sleeping, eating and drinking without valid reason and etc.

Referring back to the question asked, our stand is that sleeping during sermon is also a form of negligence in being attentive and focused while listening to the sermon. Therefore, it is also included in prohibited actions during sermon.

Imam Muhammad bin Sirin said: “The past scholars disapprove of the act of sleeping when the khatib is giving his sermon and they emphasized on this firmly.” By comparing those who sleep during sermon with the soldiers who returned in defeat (do not receive any ghanimah which is the spoils of war obtained from the enemy) Refer Al-Jamik Li Ahkam al-Quran, Al-Qurtubi (18/117).

As a conclusion, we state here that the ruling of purposely sleeping during Friday sermon is prohibited and results in the Friday prayer of the doer considered as lagha. However, if a person sleeps accidentally due to being extremely sleepy, then he is not included in the prohibition.

Nevertheless, we suggest those who feel sleepy to do some activities which will help them to get rid of it, and make him focus in listening to the sermon by methods we already mentioned in detail at Al-Kafi #700 : Hukum Beralih Tempat Duduk Ketika Khutbah Jumaat (Al-Kafi #700: The Ruling of Changing Sitting Places during Friday Sermon) through this link: https://bit.ly/2PnEk1O

We also advise the imams to always improve their way of giving the sermon to be more captivating by the usage of proper voice intonation as well as choosing topics which are closer to the heart so that the congregation may listen with more focus.

Lastly, we pray that Allah SWT bless us with a correct understanding for us in this religion. Ameen.