AL-KAFI #1497: THE RULING OF SHAKING HANDS WITH WIFE’S GRANDMOTHER 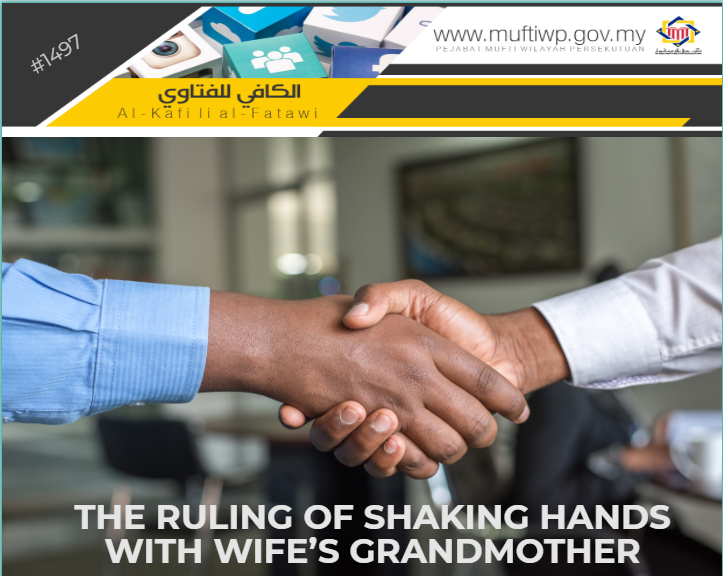 Assalamualaikum Dato’. I want to ask, is it permissible for my son-in-law to shake hands with my mother?

Lexically, there are several definitions of mahram. We summarized some of them as follows:

While according to Fiqh perspective, mahram means: “Individuals we are prohibited to marry and the prohibition is in the form of al-ta’bid (eternal) due to mubah reasons, not due to their honor and not due to removable prohibition”. Refer Kaasyifah al-Saja, Nawawi bin ‘Umar (Hlm. 114).

In explaining the meanings of the definitions above, we detail it as follows:

The phrase ‘in the form of al-ta’bid’ means: It does not include wife’s female siblings. The same for wife’s paternal and maternal aunts. This is because, the prohibition is only when they are gathered (means be married to at the same time between the wife and the stated women).

And the phrase ‘not due to removable prohibition’ is like the Majus women, or the apostates. This is because, the prohibition is due to reasons which are removable. Hence, they may be halal at other time (like when they embrace Islam).

The description on the mahram is stated in the saying of Allah SWT:

The original rules which make a woman becomes mahram are divided into two. First is the ansab (lineage) and the second one is asbab (reasons), which comes from marriage or nursing. Refer Al-Hawi Al-Kabir, Al-Mawardi (9/196).

The implication of prohibition under the category of nasab and asbab (marriage and nursing) are as follows:

Hence, referring back to the above question, we state here that women who are included under mahram are mothers of the wife. This is in accordance with the saying of Allah SWT:

The above excerpt is the argument of Imam al-Syafi’e in stating his statement: If a man marries a woman, then his wife passes away or he divorces her and not yet having intercourse with her, then I am not of the opinion that he can marry her mother (mother of the deceased or divorced woman). Refer al-Umm, Imam Al-Syafi’e (5/160).

While Imam Abu Ishaq al-Shirazi said: And it is haram upon him through musaharah; the mother of the wife whether he have had intercourse with or not according to the saying of Allah SWT:

And it is haram upon him all mothers related to the wife among the paternal and maternal grandmothers. Refer Al-Muhazzab fi Fiqh Al-Syafi’e, Abu Ishaq Al-Shirazi (2/439).

Pertaining to the mother of the wife, indeed, a man when he solemnizes with a woman, then it is haram for him to marry all mothers of his wife literally or metaphorically, through nasab or nursing, whether he had intercourse with his wife or not.

In conclusion, we state here that wife’s grandmother is a mahram due to al-musaharah because she is included in the meaning of mother of the wife and above like grandmother and great-grandmother. Mahram happens when solemnization is completed and it is not on the condition of having had intercourse with the wife first. Hence, it is not a problem for a man to shake hands with his wife’s grandmother whether it is paternal or maternal grandmother because they are among the mahram.

Lastly, may Allah SWT bless us with correct understanding in this religion. Ameen.