AL-KAFI #1498: THE RULING FOR THE PROPERTY OF A DECEASED BABY 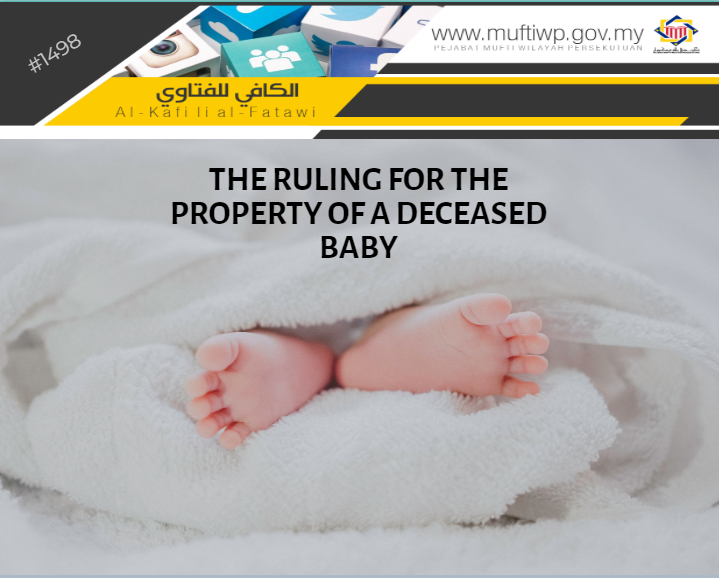 Assalamualaikum. My baby aged 2 months just passed away in the past month. During his life, he received monetary gifts from our family and friends for his birth, during hari raya and sadaqah after he passed away. My question here is, what is the status of the money? Are we as his parents have the right to the money and can we use it to perform umrah?

We start this with a saying of the Prophet PBUH:

Give the shares to those who are entitled to them, and what remains over goes to the nearest male heir.

When someone passes away and leaves some property, then the property should be divided to the rightful heirs (rightful warith) according to what is mentioned briefly in the Quran and in detail in the Sunnah. Imam Ibn Hajar al-‘Asqalani stated the phrase ‘al-Faraid’ here means nisab portion rightful to be received by each warith like half, one third, one sixth and etc. While what is meant by ‘ahliha’ is those who has the right to get the property left. [See: Fath al-Bari; 12/11].

Back to the question asked, it can be seen here that there are two situations related to money:

First: What is the status of the monetary gifts received by the baby before passing away and the sadaqah after it?

Second: Is the property can be used by the parents to perform umrah?

Basically, monetary gifts due to birth and etc. which are received before passing away are considered as inheritance. While the sadaqah money received by the parents after the death is not considered as the inheritance. This is in accordance with the definition of the scholars pertaining to the property left by the deceased whether in the form of property or rights. [See: Mughni al-Muhtaj; 4/7, al-Mausu’ah al-Fiqhiyyah al-Kuwaitiyyah; 11/206].

Further discussion on the monetary gifts received by the baby before passing away; is it his or the parents’ rights? The answer is the property and gifts are the right of the baby, and the parents have no full possession upon it, except it is permitted for the parents to use them for the purpose of raising the child up as well as anything that of the child’s benefit. This is also in accordance with a hadith of the Prophet PBUH:

'Indeed your blood, your wealth, your honour is sacred to each other, just as this day of yours is sacred in this city of yours’

Based on the general meaning of the hadith, it is stated that the Prophet PBUH forbids taking one’s property. The jurists (fuqaha’) in madhhab Hanbali are of the opinion that a father has a right to take his children’s property in absolute manner, whether the children are still young or has grown up, but on 2 conditions, which are:

As an argument, they use this hadith:

It was narrated from Jabir bin 'Abdullah that a man said: "O Messenger of Allah, I have wealth and a son, and my father wants to take all my wealth." He said: "You and your wealth belong to your father."

Further discussion on the ruling of parents taking children’s property to refer to the website of Mufti’s Office of Federal Territory Kuala Lumpur: al-Kafi lil Fatawi Siri-1171: Hukum Menggunakan Harta Anak-anak (Al-Kafi #1171: The Ruling of Parents Using the Money of Their Children)

Hence, when the baby passes away, then all of his property should be divided to his rightful warith after the funeral is completed and it is prohibited to use the property for personal use. In this context, the dead infant left no rightful warith other than his parents, according to the saying of Allah SWT:

“For the male, what is equal to the share of two females,”

Henceforth, the parents are the rightful warith of the baby, and they receive the portion as mentioned in the Quran which is 2 portions for the father and 1 for the mother, but, it may be divided equally if there is a consensus among the warith.

So, answering the above question on whether it is permissible to be used on the umrah journey, our say is yes, it is permissible. However, the one to be prioritized is the funeral of the baby, and the rest may be used for other good deeds.

Certainly, for a deceased infant, if the child has any possession whether in cash or savings before passing away, then it is considered as the inheritance. So, it is to be divided to the rightful warith. While money received after his death is not considered as the inheritance. Lastly, we pray to Allah SWT to give us understanding in the religion as well as ease in our life.