AL-KAFI #1503: IS PRAYER VALID IF THERE IS A CAT PLAYING AROUND ONE’S FEET? 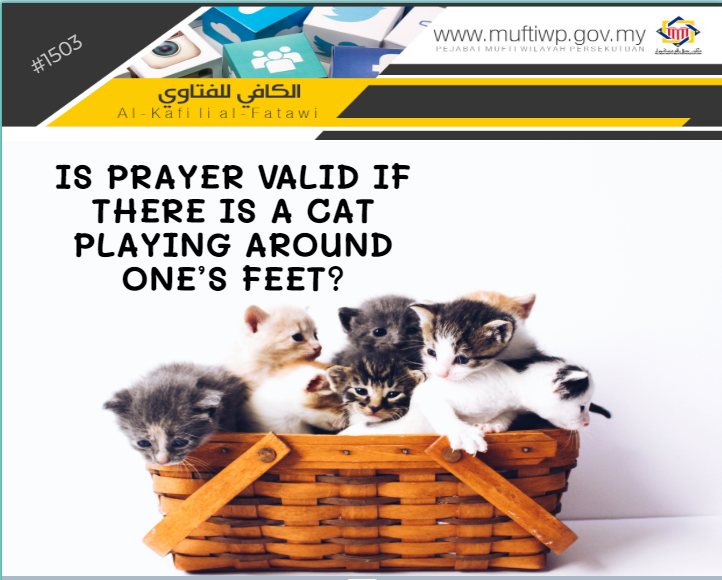 I am a university student who lives in a rented house. I have a pet cat. However, I have a question here on my worship of prayer as when I was performing prayer, my cat keeps disturbing me. For example, playing around my feet and passing my praying mat at the place where I pray. Is my prayer valid? Hope for an explanation from Dato’.

We start with a saying of the Prophet PBUH:

“A woman, a donkey and a dog disrupt the prayer,”

Some narrations come with the phrase ‘black dog’. Then, the Prophet PBUH was asked what differentiates black dog and the other? He answered:

“The black dog is a devil,”

Syeikh Fuad al-Baqi when commenting on the above hadith states that black dog is known as devil (shaytan) because it is the fiercest, most wicked (bothering others), having the least benefit and always in rest (laziest) dog. [Refer: Sahih Muslim (1/365)]

Majority of the scholars are of the opinion that one’s prayer is not invalidated if something passes in front of him. And the meaning of disrupting the prayer in the hadith is the lessening of reward as his heart (focus) is disrupted by those matters. [Refer: al-Dibaj ‘ala Sahih Muslim (2/193)]

“Indeed, the meaning of disrupting here is disrupting him from khusyuk (of the prayer) and dhikr because he is distracted by it as well as turning to it. Not due to it causes his prayer to be nullified.” [Refer: al-Majmu’ Syarh al-Muhazzab (3/251)]

So, what we understand from it is these matters do not reach to the extent of invalidating one’s prayer, but has cause one to lose his khusyuk. At last, it resulted in the decrease of reward in prayer.

Due to that, during prayer, we should try our best to preserve the khusyuk and avoid things that may cause our heart lose the focus during prayer. This is as stated in the saying of the Prophet PBUH:

Nothing interrupt prayer, but repulse as much as you can anyone who passes in front of you, for he is just a devil.

Cat Passes by and Playing Around One’s Feet

Referring back to the question asked, we are inclined to state that one’s prayer is still valid and not invalidated if a cat passes by or plays around the feet. This is strengthened by the narration of Abdullah bin Umar and Ali bin Abi Talib R.Anhum as recorded by Imam Malik in his book where they said:

“Nothing interrupts prayer anything passes by in front of the one who prays.” [Refer: al-Muwatto’ (1/156)]

Cat is a Pure Animal

Besides, cat is also a pure animal which always being around the humans. Kabshah binti Ka’ab bin Malik once reported that one day, Abu Qatadah was at his home, then, she prepared him a water in a container to take wudhu’. Suddenly, a cat came and drank from the container. Abu Qatadah just let it be. Then, Abu Qatadah realized that Kabsyah was looking at him, so he asked, "O my niece! Are you surprised at that?" She said yes. He said: "Indeed Allah's Messenger said:

'It is not impure; it is only one of those roam around among you.'

So, we know that there is a flexibility and specific ruling given to cats because it is the animal which goes around humans or be made as a pet.

Al-Son’ani said in his book that:

“Allah SWT has given flexibility upon His slaves (on rulings regarding cats) by making them pure (not considered as najis), to lift hardship (from you) … and this hadith is a dalil that cats are pure, including what’s left from their drink (remainder of water drank by cats).” [Refer: Subul al-Salam (1/33)]

Besides, in madhhab Imam al-Shafi’e, water from cat’s lick is pure and it is not makruh to be used. [Refer: al-Majmu’ Syarh al-Muhazzab (1/172)]

After reviewing scholars’ opinions as well as their arguments, we can conclude that:

May Allah SWT give us taufiq and hidayah for us to understand His religion as well as practicing His Shari’a the best we can.

[1] something which generally or normally happens