AL-KAFI #1504: IS TEACHING SINFUL ACTS TO SOMEONE MAKES HIM BEAR THE SINS OF THE DOER? 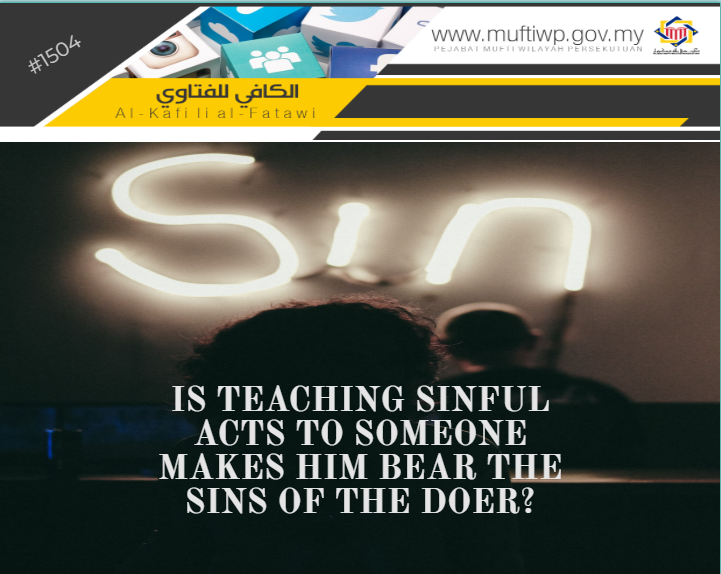 Assalamualaikum Dr. My friend would like to ask on sin investment. Clearly, I understand that one’s sins are not on the shoulder of others and for fardh al-kifayah, the sins are on the shoulder of them collectively if it is not performed. However, in one situation, A taught B to commit sins. And after some time, A repented and abandoned the sin, but B continues with that. A is unable to advise to B to stop for they lost contact with each other. Does A still bear the sin of B, each time B commits it? Thank you.

It is human nature to help between one another and it is something that Islam emphasizes on. Allah SWT has set guidelines in this matter. Allah SWT says in the Quran:

In everything we do, there are rewards given. If the actions are good, then the rewards are also good and vice versa.

Syeikh al-Maraghi in his book states, “Allah SWT command His slaves to perform actions stated in His book. And that it causes calamity and torments to those who cooperate on things that contradict the syarak. (See Tafsir al-Maraghi, 6/46)

The same for in wrongdoings. Islam strictly forbids the believers to cooperate in things that contradict the Shari’a. This is because, one who teaches others something, Allah SWT will grant him the same as what the doer did.

That they may bear their own burdens in full on the Day of Resurrection and some of the burdens of those whom they misguide without knowledge. Unquestionably, evil is that which they bear.

Imam Ibnu Kathir commented on this verse citing the opinion of Imam Mujahid where he says: What is meant by (يَحْمِلُونَ أَثْقَالَهُمْ) is those who bear their sin and those who follow them in sinning. And they will not get lessening of torment due to the people who follow them.” (See Tafsir Ibnu Kathir, 4/566)

Other than that is a hadith narrated by Jarir bin Abdullah RA, where the Prophet PBUH said:

And he who introduced some evil practice in Islam which had been followed subsequently (by others), he would be required to bear the burden like that of one who followed this (evil practice) without their's being diminished in any respect

Imam Nawawi commented on the above hadith saying, “It is Sunnah to help others in goodness and it is haram to help others towards evil. Whoever shows the path of good will be rewarded the same as the doer to the Day of Judgement. Otherwise, whoever shows the path of sin will be sinful the same as those who commit it until the Day of Judgment… which means reward and torment will continue during his life or after death.” (See Syarh al-Nawawi ala Muslim, 16/226-227)

Besides, Ibnu Hajar al-Asqalani in his book states, he who bears the sins of those he showed the path to it is he who has yet repented from the sin. (See Fath al-Bari li Ibnu Hajar, 12/193)

Repentance from Every Sin

Repentance and asking for forgiveness from Allah SWT for those who commit transgressions is an obligation. And every human is bound to commit mistakes and sins to Allah SWT. The Prophet PBUH said:

“Every son of Adam commits sin, and the best of those who commit sin are those who repent.’”

Hence, asking for forgiveness from Allah SWT earnestly and is determined not to repeat them as well as fixing his conduct. This is because, it is a command from Allah SWT and His attributes of the Most Forgiving and the Most Merciful no matter how big a sin one has committed. Allah SWT says:

Except for those who repent and correct themselves and make evident [what they concealed]. Those - I will accept their repentance, and I am the Accepting of repentance, the Merciful.

Syeikh al-Maraghi when commenting on the above verse states, “Those who return asking for forgiveness from Allah SWT… and they correct their conduct by getting closer to Allah SWT by doing good deeds. They are those who are given honor and forgiveness by Allah SWT’s grace.” (See Tafsir al-Maraghi, 2/31)

Hence, Allah SWT promise huge punishment for those who repeat their sins after they ask for forgiveness and repent to Him. Allah SWT says:

Allah has pardoned what is past; but whoever returns [to violation], then Allah will take retribution from him. And Allah is Exalted in Might and Owner of Retribution.

Referring back to the question and dalil presented, we can conclude that do not despair in asking for forgiveness from Allah and to always repent earnestly to get His blessings and forgiveness.

Pertaining to invested sin, we are of the opinion that one will not bear the sins after he repents earnestly, correcting the conditions and sins committed and does not repeat them again. Unless, they do have yet to repent.

This is because, Allah SWT is the Most Forgiving and the Most Merciful as well as promising to forgive all sins committed by His slaves when he repents earnestly. (taubat nasuha)

O you who have believed, repent to Allah with sincere repentance. Perhaps your Lord will remove from you your misdeeds and admit you into gardens beneath which rivers flow

And if he already put his earnest effort to search and correct the wrongdoings that he taught, but still unable to correct them, then with his effort, may all of his sins be forgiven.

Besides, you may refer articles in the website of Mufti’s Office of Federal Territories:

Lastly, may Allah SWT forgive all our sins as well as granting us the understanding in practicing His commandments.