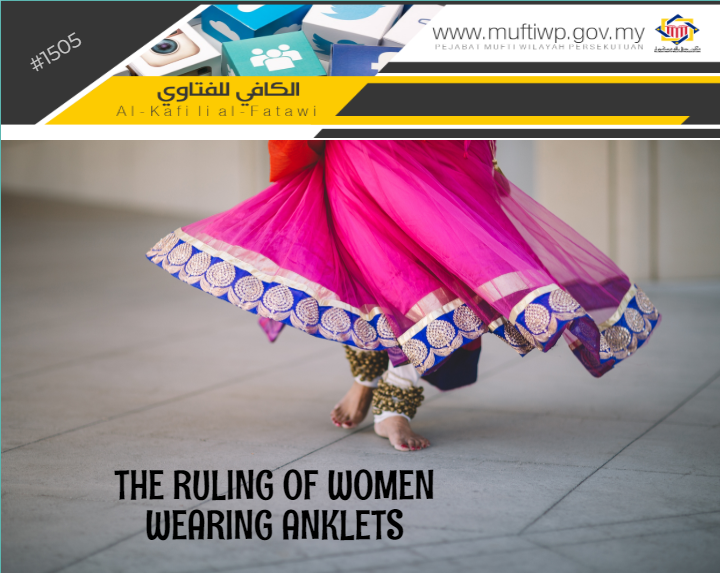 Assalamualaikum Dato’. My wife wants to wear anklets. The ruling of wearing anklets in Islam is haram, isn’t it? I hope Dato’ may explain this. I am still confused. Thank you.

O children of Adam, take your adornment at every masjid, and eat and drink, but be not excessive. Indeed, He likes not those who commit excess.

Pertaining to ornaments by wearing anklets for women, Allah SWT forbids the women from stamping their feet for the anklets to produce sound and attracting the men. Allah SWT says:

And let them not stamp their feet to make known what they conceal of their adornment. And turn to Allah in repentance, all of you, O believers, that you might succeed.

In al-Mausu’ah al-Kuwaitiyah, there is a statement of Ibnu Kathir:

“The women of Jahili period wore anklets with bells, and they walked while stamping their feet so that their ornaments will be heard and seen by the men. Hence, Allah SWT forbids Muslim women to do the same.” (See al-Mausu’ah al-Fiqhiyyah al-Kuwaitiyyah, 7/88)

Imam al-Izz bin Abd al-Salam commented on the verse stating, “The women walked while stamping their feet to produce sound from their anklets. Hence, the prohibition is upon the action.” (See Tafsir al-Izz Abd al-Salam, 2/399)

Imam al-Qurtubi in his tafsir states, “Whoever do the action (stamping feet) to boast their ornaments, then this doing is makruh. And whoever do this with the purpose of tabarruj as well as attracting men’s attention then the action is prohibited and is cursed. The same for stamping shoes for men, if done with ujub, then it is prohibited because ujub is a major sin, and if a man commits it due to tabarruj, then it is impermissible. (See Tafsir al-Qurtubi, 12/238)

Imam Ibnu Kathir in his tafsir states, “Women of Jahili period when they walk, they wear anklets and the anklets do not produce sound. Hence, they will stamp their feet so their anklets will produce sound and it will be known to men. So, Allah SWT forbids Muslim women from doing so. Likewise, if an ornament is covered by clothes, then they will shake it (the ornament) to make others know about it. Hence, the action is included in this prohibition. The same for wearing perfume when going outside of the house for men to smell it.” (See Tafsir Ibnu Kathir, 6/49)

Dr Wahbah al-Zuhaili when commenting on the above verse states: “Wearing anklets and stamping feet to produce sound and attract men, this kind of action is prohibited and it is also the dalil of prohibition of softening voice for women. (See al-Tafsir al-Munir li Zuhaili, 18/212)

Based on the question and a review on the dalil presented, it can be concluded that the prohibition in the above verse is due to the action that lead fitnah and attract ajnabi men.

This is like the action of stamping feet or shaking hands to produce sound from the anklets worn in order to attract men. So, this action is prohibited by Allah SWT.

This also includes wearing high heels as when they are worn, they may produce sound and attract the attention of men. So, this action is also prohibited because it is included in the prohibition of the above verse. If it is for other reasons, then it is permissible.

Hence, it can be concluded here that wearing anklets should:

This is as stated by the Prophet PBUH in a hadith narrated by Abdullah bin al-Ash RA:

‘Eat and drink, give charity and wear clothes, as long as that does not involve any extravagance or vanity.’

May Allah SWT give us correct understanding in His religion as well as taufiq and hidayah to practice His shari’ah the best we can.