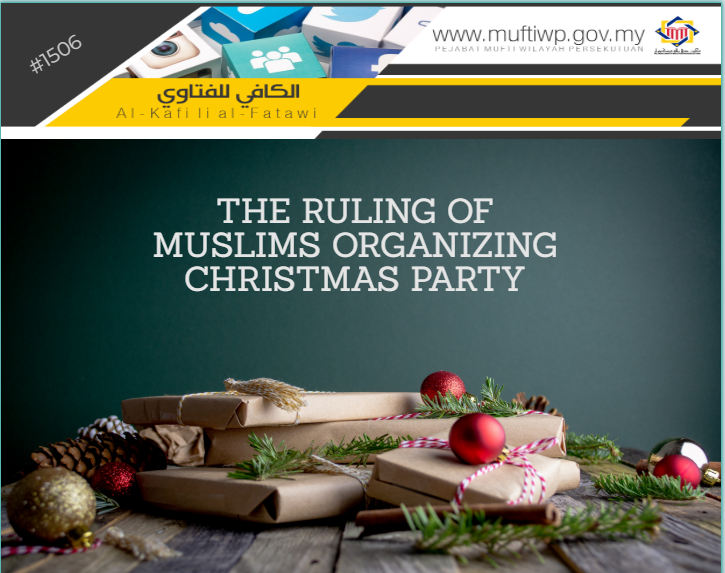 Assalamualaikum w.b.t, Sohibus Samahah Mufti. One of my family members would like to ask the opinion of the scholars on the current trend where Muslims start to organise Christmas Party. Normally, before this, the Christians are the one who organises it, but now, it is our Muslim people who organise it in their houses. Hope for the opinion and explanation from Datuk Mufti. Thank you.

We start this with the saying of the Prophet PBUH:

You would tread the same path as was trodden by those before you inch by inch and step by step so much so that if they had entered into the hole of the lizard, you would follow them in this also. We said: Allah's Messenger, do you mean Jews and Christians (by your words)" those before you"? He said: Who else (than those two religious groups)?

Imam al-Nawawi when commenting on the above hadith explains that what is meant by syibr (span) and dziro’ (cubit) as well as the hole of the dhob are the analogy of Muslims’ actions which resemble the Jews and Christians in terms of following them in ma’siah (transgressions) and actions that contradict Islamic teaching. [See: Syarh Muslim ‘ala al-Nawawi; 2/219].

Christmas party is normally organised by putting up preparations which lead to negligence and misremembrance of the religion where the foods and beverages prepared are not halal, gambling, promiscuity between men and women and etc. So, organizing Christmas party which is a religious celebration of the Christians but is celebrated by Muslims is an act of tasyabbuh (resembling) the Christians. In fact, tasyabbuh towards religion other than Islam is totally prohibited. This is stated in the hadith of the Prophet Muhammad PBUH:

He who copies any people is one of them.

In another saying, the Prophet PBUH said:

He is not one of us who resembles other than us

Organising Christmas Party, if we look into the intention and purpose, it can be seen as a connotation of acknowledging another religion and spreading their eminence. This can be seen through our article Tahqiq al-Masail Siri-7: Hukum Mengucapkan Merry Christmas Kepada Orang yang Beragama Kristian (The Ruling of Wishing Merry Christmas to Christians). In that article, generally, the majority of the four scholars ruled it haram to congratulate the non-Muslims for their celebration. So, pertaining to organizing Christmas Party, it is a greater priority to be avoided when compared to congratulating the Christians.

Besides, this should be avoided as a way or method to block the means towards transgression and sins. Hence, the concept of sadd al-zari’ah (blocking the means) may be applied here in the context of organizing Christmas Party to avoid more sinful acts from taking place especially towards those that may harm the faith. This is in accordance with the saying of Allah SWT:

Here, we include the conference of the 68th Muzakarah Fatwa Committee of National Council for Islamic Religious Affairs Malaysia which convened on 12th April 2005 which discussed on Muslim Guidelines to Celebrate Non-Muslim Religious Celebrations. The Muzakarah has concluded that:

In stating which non-Muslim religious celebration may be attended by the Muslims, some main criteria should be followed so that they will not contradict with the Islamic teachings. Those criteria are as follows:

In conclusion, we are inclined to say that organising Christmas Party among Muslims are highly discouraged to avoid resembling the Christians in their celebration, an act of glorifying syirk, helping towards kufr and protecting oneself from transgression and evildoings. Hence, we advise the public not to celebrate the celebration of other religions like we celebrate Islamic celebration which are ‘Eid al-Fitr and ‘Eid al-Adha. Lastly, we pray that Allah SWT give us understanding in His religion, bless us with ease and firmness in worshipping Him. May Allah SWT bless all our actions and reward them with the best reward of all.