AL-KAFI #1507: THE RULING OF COMPANY INHERITANCE 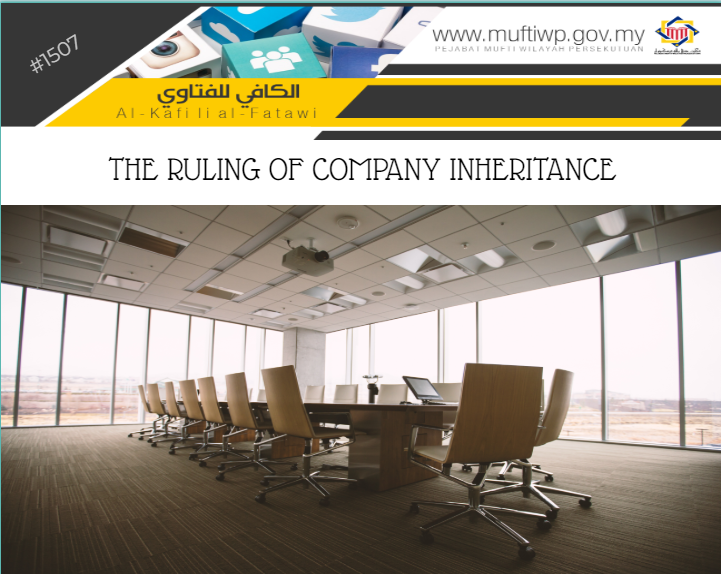 Assalamualaikum w.b.t. I have a question here on inheritance for company. My father left us 2 types of company and the distribution of the property is delayed due to certain reasons. And the corporation is managed by my siblings. Approximately 5 years after that, the corporation expanded to some branches and subsidiaries. All of them is managed by my siblings. So, when we intend to distribute the inheritance of the company according to the stock shares, should we consider all of shares from the companies and subsidiaries? Or is it only 2 companies that exist while he is alive is considered as the inheritance while new companies are not included in the distribution? Hope for an explanation from HE Mufti. Thank you.

We start this with the saying of Allah SWT in the Quran:

Then, the Prophet PBUH also said:

Give the shares to those who are entitled to them, and what remains over goes to the nearest male heir.

Inheritance is everything that is left by the deceased after his death either in the form of movable property like gold, silver, cash money, furniture, stock and etc, or in the form of unmovable property like lands, houses and etc. All of these are included in the meaning of inheritance. So, when someone passes away and leaves some amount of the stated property then it is to be distributed to his or her rightful warith. [See: al-Fiqh al-Manhaji; 5/71].

Referring back to the presented question on subsidiary companies and the stocks dividend which expanded after the passing away of someone, if they (stocks and the companies) expanded from the same capital money which is from the inheritance of the father, then, we state that the stocks dividend and the subsidiary companies expanded even long after the father passed away, all of these is included under the inheritance and should be distributed according to faraid to the rightful warith. This is in accordance with a maxim in Shaf’ie madhhab which is:

Indeed, inheritance and its outgrowth are for the rightful warith according to their own portion in inheritance

Pertaining to those who manage the inheritance and contribute to its its growth, but the property was never distributed to the rightful warith, if the person managing it for example in this case, the eldest brother who manages the company until it expands to subsidiary companies, then the status of the company need to be checked first. In which, if the eldest brother also put his money as the capital, then it should be separated from the original property as well as what expanded by it before distributing the inheritance. Then, if the eldest brother managed it willingly and does not demand anything from it including the companies’ profits and others before distributing the inheritance to other rightful warith according to faraid, then this is better and he will surely get an immense reward by Allah SWT. However, if he seeks for wages for his efforts, then he is to be paid in accordance with the weight of his efforts.

Here, there is a principle recommended by Dar al-Ifta’ al-MIsriyyah, they said:

The inheritance and its outgrowth all are for the rightful warith as long as those who manage the property take monthly wages in accordance with what they have put their effort into.

In conclusion, inheritance along with everything that expands or grows from it is considered as inheritance. Hence, it should be distributed according to faraid ruling to those rightful warith. So, here we state, stocks’ dividend for all companies whether the original or the outgrowth is the inheritance. While when there is usul or claim from someone, then it is best if this matter is referred to the court to follow the procedure and distribution. Lastly, may Allah SWT give us understanding in the religion and ease our dunya and akhira affairs. May Allah SWT accept and bless all our actions.