AL-KAFI #1508: THE RULING OF WORKING IN A DELIVERY COMPANY WHICH DELIVER INTOXICANTS 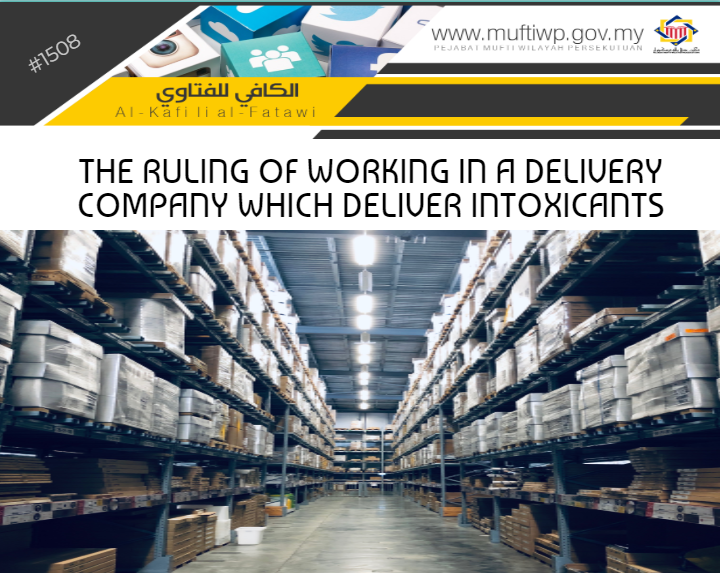 Assalamualaikum Mr. Mufti. I am studying overseas and work part-time in a delivery company. In my area, it is hard to find part-time jobs especially because I wear hijab in a country where Muslim is a minority. Before working here, except for delivering general items, I never knew that they also deliver intoxicants. So, my work here other than arranging the boxes or mails, I also have to arrange the intoxicants. Does this mean that I am included in the 10 people who are cursed by Allah SWT? Thank you.

The Prohibition of Intoxicants

The prohibition of intoxicants is absolute and it is wajib to pay great attention to it in our daily lives. This is because, there are specific dalil of prohibition as the saying of Allah SWT says:

O you who have believed, indeed, intoxicants, gambling, [sacrificing on] stone alters [to other than Allah], and divining arrows are but defilement from the work of Satan, so avoid it that you may be successful.

Besides, the prohibition of intoxicants also includes people who are related to it like those who press, deliver and sell them.

This is because, Allah SWT command His slaves to help each other in righteousness and forbid cooperating each other towards evildoings. Allah SWT says:

Pertaining to something done that leads to evildoings and prohibited, they are all prohibited (haram).

It is explained in al-Mausu’ah al-Fiqhiyyah that majority of Shafi’e, Maliki and Hanbali madhhab prohibit it like selling food to someone of whom he is certain would eat the food he sold during the day of Ramadhan. The same is stated in the example presented by the Hanabilah who prohibit a person from renting his shop to another who is selling intoxicants.

Whereas, Imam Abu Hanifah differs on this matter by not ruling it makruh (undesirable) for a person who did it but whose intentions are not to commit transgressions. Such as selling flying pigeon and wood to make musical instruments. It is different from those who sell weapons to the rebels because this promotes evildoings and helps towards sin.

In another permissible situation, such as selling steel to make weapons because the intention is not to kill and it is not included as helping towards evildoings. Also, the Hanafite rule it permissible in the issue of renting such as one works in building church, delivering liquor to the kafir dhimmi by his own hands or his vehicles, breeding pigs, renting house for the purpose of non-Muslims’ worship like church or renting house for the purpose of selling intoxicants. This is because, it is not an evildeed to commit such acts (of renting), but the sin is committed by the person who rents the property. Imam Burhanuddin al-Marghinani states in this issue, renting is taking the benefit from the renting money which is to be paid by the renter (not the house owner), while the evildeed is done by the renter.

Syubhah technically means when it is uncertain as to the haram or halal of some things. Or being unclear as to the true meaning of its halal and haram status. (See: al-Mausu’ah al-Fiqhiyyah al-Kuwaitiyyah 25/338)

The Muslims are encouraged to preserve themselves from committing unclear things between halal and haram. This is due to a warning in a hadith narrated by Nu’man bin Basyir where the Prophet PBUH said:

What is lawful is evident and what is unlawful is evident, and in between them are the things doubtful which many people do not know. So he who guards against doubtful things keeps his religion and honour blameless, and he who indulges in doubtful things indulges in fact in unlawful things, just as a shepherd who pastures his animals round a preserve will soon pasture them in it. Beware, every king has a preserve, and the things God his declaced unlawful are His preserves.

Imam al-Suyuti when commenting on this hadith states that the mutasyabihat are unclear matters between halal and haram, and whoever leaves it means he protects his religion from fitnah. (See: Syarah al-Suyuti ala Muslim, 4/190)

Imam al-Qurtubi states that the prohibition of committing mutashabihat is to avoid from falling into what is prohibited. And this is would prevent or avoid harm from happening. (See: Tafsir al-Qurtubi, 3/359)

Referring back to the above question and scholars’ discussion, it is concluded that:

Hence, we are of the opinion that if one is involved directly such as lifting boxes which contain intoxicants, the action is prohibited and it is wajib to leave it so that one will not fall into sin.

Hence, we suggest for you to have a discussion with your employer so that you can be transferred to another division where your work will not involve anything related to intoxicants.

And if it is hard to avoid it, it is best to search for other jobs and avoid from being involved in jobs related to intoxicants.

By leaving the jobs which are related to haram and syubhah with the purpose of protecting the Shariah and maslahah of the religion, hopefully your affairs your affairs will be made easy as well as being blessed by Allah SWT with halal sustenance. Allah SWT says:

May Allah SWT give us the correct understanding of His religion as well as taufiq and hidayah to practice His Shariah the best we can.