AL-KAFI #1509: THE RULING OF CHANGING NAME FOR MUALLAF WHO EMBRACES ISLAM 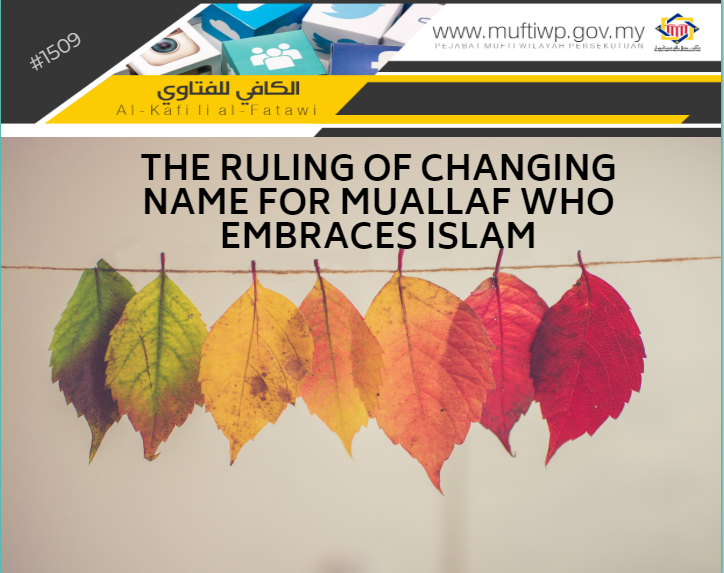 Is it necessary for non-Muslims to change their names or their father’s names when embracing Islam?

Islamic Shari’ah stresses out on the usage of names with good meanings. Names are a declaration of identity for a Muslim, the acclamation of religious eminence, an ornament and clothing for a newborn and those who just embraced Islam. Good names not only benefit a person int his world, but also used when one is called before Allah SWT in the hereafter as stated in prophetic hadith:

On the Day of Resurrection, you will be called by your names and by your father's names, so give yourselves good names

Upon commenting on this hadith, Imam al-Bahuti states that it is an obligation of the father to choose good names for his children. (Refer: Kasyaf Al-Qana', 2/26).

Islamic scholars have agreed that it is wajib to change names containing elements of kufr, syirik and contesting Allah like the names of deities and idols. This is in accordance with a hadith narrated by Abu Hurairah RA where the Prophet PBUH said:

"The most disgraceful man near Allah is a man who calls himself (or likes others to call him) Malikul-Amlak (i.e., king of kings)."

Names with bad meanings (aside from names which are prohibited) are Sunnah to be changed, but there is no compulsion on doing so. This is because there is no clear evidence on this matter. This is indicated by a hadith of al-Bukhari narrated by Said al-Musayyib, from his father:

That his father (Hazn bin Wahb) went to the Prophet (ﷺ) and the Prophet (ﷺ) asked (him), "What is your name?" He replied, "My name is Hazn." The Prophet (ﷺ) said, "You are Sahl." Hazn said, "I will not change the name with which my father has named me." Ibn Al-Musaiyab added: We have had roughness (in character) ever since.

In this hadith, the Prophet PBUH’s silence (taqrir) regarding the action of a Companion who keeps his name with bad meaning. This is an indication (qarinah) that using name with bad meaning is makruh (discouraged) and not haram. (Refer: Ahkam Al-Maulud fi Al-Fiqh Al Islami, pg. 363).

Muslims are encouraged to have good names. Hence, changing name which is already good to the one with lesser meaning or without meaning is makruh. The apparent example is the action of shortening one’s name that the name then does not have any meaning at all.

Changing name to other prohibited names is haram.

According to the ruling of changing names as we explained, it can be concluded that the commandment of changing names for muallaf is in accordance with the meaning. If his name indicates certain deity, for example, Siva or Murugan as practiced by the Hindus or indicates kufr, then it is wajib for him to change it. If it has a lesser meaning, then it is Sunnah to change it.

Besides, one who has name with good meaning in his own mother tongue (other than Arabic language), it is not wajib to change it. The reason is, there is no dalil that states the names should be in Arabic. This can be seen when the Prophet PBUH remain the names of the Companions who are non-Arabs.

However, if his name has good meaning (in his mother tongue), but he still wants to change it to Arabic name, then it is permissible (Refer: al-Bayan wa al-Tahsil, 14/3). Yet, if one’s name before Islam is a popular name among the disbelievers (like the Pope’s name or etc…), it is better for the name to be changed. (Refer: Majmu’ Fatawa Ibn Baz, 18/55).

The Ruling of Changing the Father’s Name After Embracing Islam

There is no dalil from al-Quran or al-Sunnah which command a muallaf to change his father’s name after embracing Islam. The action of the Prophet PBUH changing the bad names discussed before clearly indicates that the action is limited only towards the Companions without changing their fathers’ names. This evidence is clear where many Companions retain their fathers’ names after embracing Islam like Umar ibn al-Khattab, Bilal ibn Rabah, Ali bin Abu Talib and Utbah ibn Abu Lahab. In fact, Ikrimah bin Abu Jahal also retains his father’s name although his father is an individual who clearly rejects and opposes Islam. (Refer: Fatwa al-Lajnah ad-Daimah, 20/327).

Hence, changing father’s name is not wajib for a Muslim, in fact, it is forbidden in Islam as a hadith:

He who claimed for another one his fatherhood besides his own father knowingly that he was not his father-to him Paradise is forbidden.

Besides, there is a great concern that the actions of changing the name of muallaf’s father after he embraces Islam will eliminate one’s lineage, cause confusion and long-term problems. (Refer: Fatwa al-Lajnah ad-Daimah, 20/327).

Based on the above arguments, in our opinion, a muallaf has a right to retain his original name with good meaning even if it is not the same as other Muslims. Especially when there is maslahah (need) related to his job, trade, travel documents and family ties. While for those muallaf who want to retain their fathers’ names, they may do so to protect the lineage and family ties.