AL-KAFI #1510: THE RULING OF SUJUD (PROSTRATION) ON THE GROUND OR FLOOR WITHOUT PRAYER MAT 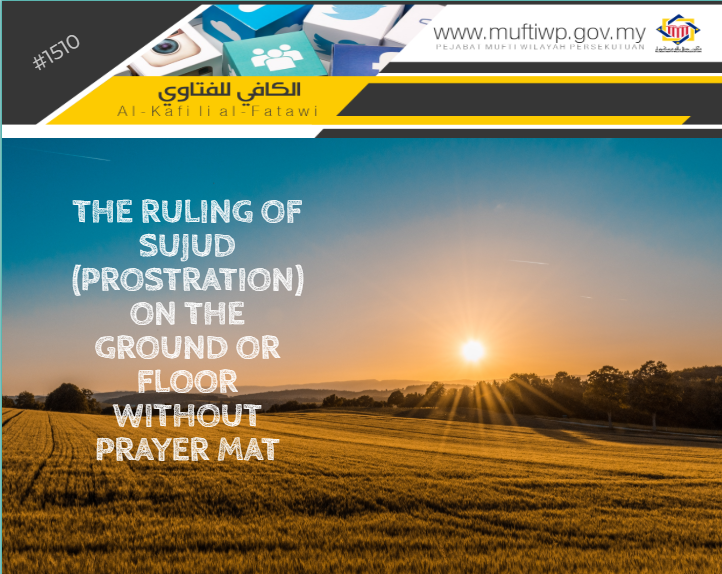 Assalamualaikum Sahibus Samahah Mufti. Can someone perform prayer on the ground or floor without having prayer mat?

Allah SWT made humans from materials of the earth and command them to live and prosper. Allah SWT said in the Quran:

“He has produced you from the earth and settled you in it,”

Besides, Allah SWT honor the Prophet Muhammad PBUH with an honor that has never been given to other prophets. Among them is Allah SWT made every surface of the earth as a place of sujud (to perform salah) on it and made its soil pure to do tayammum when water is absent for the ummah of the Prophet PBUH. The Prophet PBUH said:

"I have been given five things which were not given to anyone else before me. -1. Allah made me victorious by awe, (by His frightening my enemies) for a distance of one month's journey. -2. The earth has been made for me (and for my followers) a place for praying and a thing to perform Tayammum, therefore anyone of my followers can pray wherever the time of a prayer is due.”

Hence, basically, it is permissible to perform salah anywhere on land or floor without using prayer mat because it is an honor given to the ummah of the Prophet Muhammad PBUH.

However, there are some places which are excluded from this permissibility to sujud on it like graves and washrooms. In another hadith, the Prophet PBUH said:

"All of the earth is a Masjid (place of sujud) except for the graveyard and the washroom."

The same is if a particular place has najis on it, then it is impermissible to perform salah on it. This is because the fuqaha’ have stated that among the requisites of salah is pure from najis of one’s body, clothes and praying area. (طهارة عن النجاسة في الثوب و البدن و المكان). What is meant by praying area is:

(Any place) which come in contact with anyone when performing salah, which touches his clothes and body during prayer. (Refer al-Taqrirat al-Sadidah fi al-Masail al-Mufidah: 202)

Hence, if there is najis at the praying area which comes in contact with one’s clothes or body, then it is impermissible to perform salah at the said place and the salah becomes invalid.

However, if the najis does not come in contact with the body or clothes, but is near with the praying area, then the ruling is makruh (discouraged). This is as stated by Sheikh Hassan al-Kaff in which he states:

Does not affect the validity of prayer if there is najis near one's body, clothes or things which hung on the performer of salah, if they do not come in contact with him. However, it is makruh if the najis is too close to him. (Refer al-Taqrirat al-Sadidah fi al-Masail al-Mufidah: 203)

Based on the above discussion, we conclude that the ruling of sujud on the ground or floor without using prayer mat is valid and permissible. This is because it is a virtue given by Allah SWT to the ummah of the Prophet Muhammad PBUH which make all surface of this earth as the place of sujud to perform salah on it except graves and washrooms.

Furthermore, the only exception is if the said place has najis which comes in contact with the body, clothes or things which hung on the performer, so, salah cannot be performed on it because among the requisites for salah is pure from any najis at the praying area (طهارة المكان). If the najis does not come in contact, but is in the vicinity, then the ruling is makruh and it is best to be avoided.

Besides, we are pleased to remind that sujud without prayer mat should be done during the absence or difficulty of having it. However, if prayer mat is already spread and is easy to get, then we should use it and never be lazy to spread it for performance of salah on it. This is better because it confirms the purity and removes doubts from oneself. May Allah SWT give us the correct understanding in His Shari’a as well as taufiq and hidayah to perform worships truly for Him. Amin.