AL-KAFI #1511: THE RULING OF ABORTION DUE TO HEALTH CONDITION 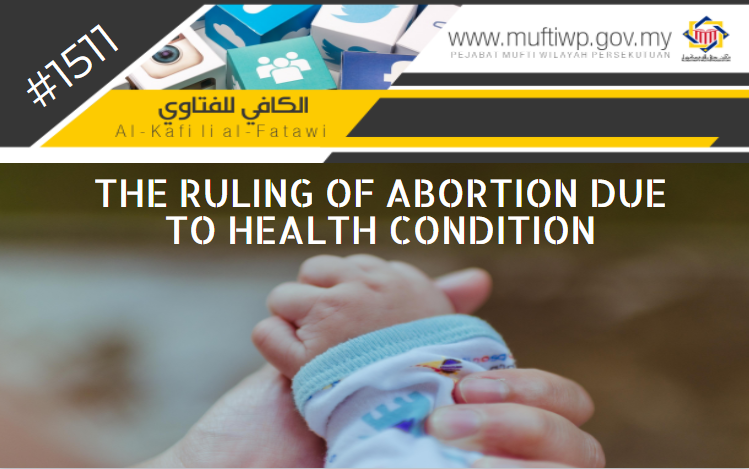 Assalamualaikum ustaz. I would like to ask a question on the ruling of abortion. I am a patient of lymphoma cancer stage 2 and I have 2 sons. I recently had my chemotherapy and in the process of recovery. By Allah’s will, I found out that I am pregnant 9 months afterwards. I ask for an opinion from the doctor and they said that this pregnancy is possible to sustain. I would like to ask for religious perspective. Shall I continue this pregnancy because my motherly instinct feels hard to continue this journey and worry if something may happen to me?

The constituents of one of you are collected for forty days in his mother’s womb in the form of a drop, then they become a piece of congealed blood for a similar period, then they become a lump of flesh for a similar period. Then God sends to him an angel with four words who records his deeds, the period of his life, his provision, and whether he will be miserable or blessed

Abortion or al-ijhad (الإجهاض) lexically means fetus which is already collapsed with complete features and the soul is blown, but not yet alive. And the word al-ijhad also means the same with some other words, which are al-izlaq (slip), al-isqat (fall), al-imlas (slip) and al-islab (fall). (Refer: Al-Qamus al-Fiqhi, pg 174)

THE RULING OF ABORTION IN ISLAM

First Situation: The Age of Fetus is More Than 120 Days

Majority of the jurists have decided to state that it is haram to do abortion after the soul is blown without any reasons categorized as suppressing need. (Refer: Al-Bahr al-Raiq, 8/233; Nihayah al-Muhtaj, 8/422; Al-Insof, 1/386; Hasyiyah al-Dasuqi, 2/367).

The age of the pregnancy which soul is blown into it is four months or 120 days of pregnancy based on hadith of Ibnu Mas’ud mentioned before. (Refer: Fathul Bari, 11/588). It is considered as a crime upon a living creature, in complete form and alive without having any reasonable excuse. (Refer: Syarah Sunan Ibn Majah, 5/9; Syarh Zad al-Mustaqni',7/325).

Abortion is something harmful for the fetus because that action is in the purpose of executing it. It may harm the life of the mother because in some conditions, abortion may cause excessive bleeding towards the mother and then harm her life.

Second Situation: The Age of Fetus is Less Than 120 Days

We are inclined towards the opinion of the majority on the prohibition of the abortion of fetus which aged less than four months. (Refer: Nihayah al-Muhtaj, 8/416; Al-Mughni, 7/816; Al-Syarh al-Kabir, 2/266-267). Further explanation on this chapter may be referred to our related article:

AL-KAFI#659: The Ruling of Abortion for Career Women Who Are Busy with Works

AL-KAFI#1145: Is It Permissible to Abort 4-Months-Old Pregnancy

ABORTION DUE TO HEALTH CONDITION

Majority of the scholars state the permissibility of abortion whether the pregnancy is less than four months or more if the pregnancy has high potential to harm the life of the mother. For example, extrauterine pregnancy (ectopic pregnancy), pregnancy for people who suffer chronic illnesses like cancer and HIV.

This opinion is based on the basic principles of usul al-fiqh which states:

“If there are two types of harm, the bigger harm is taken into account by committing the lesser harm” (Refer: Al-Asybah wa al-Nazair, pg 87; Al-Wajiz fi Usul al-Fiqh, pg 203).

In such situation, the life of both mother and child are of the same importance and valued. However, if choice is to be made between the life of the mother which clearly alive, then it should be prioritized compared to the baby which is not yet certain of its capability to live. Islam is a realistic and flexible religion. In the situation where there are suppressing needs, flexibility is given to ‘escape’ from the original principle which probably does not allow. (Refer: Al-Majmu' Syarh al-Muhadzzab, 5/301; Al-Bahr Al-Raiq, 8/233).

The 26th Convention of Fatwa Committee of National Council for Islamic Religious Affairs convened on 7th March 1990 states on the issue of the ruling of abortion due to doctor’s advice that malformation towards child is unavoidable. Briefly, the fatwa states:

The convention has decided that it is haram to abort the fetus except due to extreme malformation which may harm the life of the mother.

This fatwa also aligns with the decision of Majma’ al-Fiqh al-Islami which states: “If the pregnancy aged 120 days, then it is haram to abort it, even there are malformation, except if it is certified by the medical experts that this pregnancy may harm the life of the mother. So, in this situation, it is permissible to abort the child to protect the life of the mother which is prioritized”. (Refer: Qarar Majma’ al-Fiqh al-Islami, No 277).

Hence, referring back to the above question, we are inclined to state that it is haram to abort the pregnancy because there is no great possibility of harm towards the life of the mother. This is because the medical experts said that the mother’s condition is still stable and safe to continue the pregnancy. However, we advise the mother to seek for counselling advice from the psychiatric department and refer to the medical expert to take needed steps to ensure the health of mother and child always in a good hand.

We also advise the mother to ask for help from Allah by multiplying supplication and prayer so that all will be eased along the process of pregnancy and childbirth. Also, we shall always have good perception to Allah and be content with His fate as He says:

Say, "Never will we be struck except by what Allah has decreed for us; He is our protector." And upon Allah let the believers rely.

Besides, the hadith qudsi narrated by Abu Hurairah RA, where he said that the Prophet PBUH said:

After analyzing the above discussion, we are inclined to state that the ruling of aborting a pregnancy if there is harm towards the mother is permissible according to shara’ rulings as to protect the bigger maslahah which is protection to the life of the mother. It comes with a condition that the matter shall be certified by the medical experts. However, if the pregnancy is not risking the life of the mother, then it is haram to abort. Wallahu a’lam.