AL-KAFI #1549: THE RULING OF RECITING THE QURAN WITHOUT CONTEMPLATION 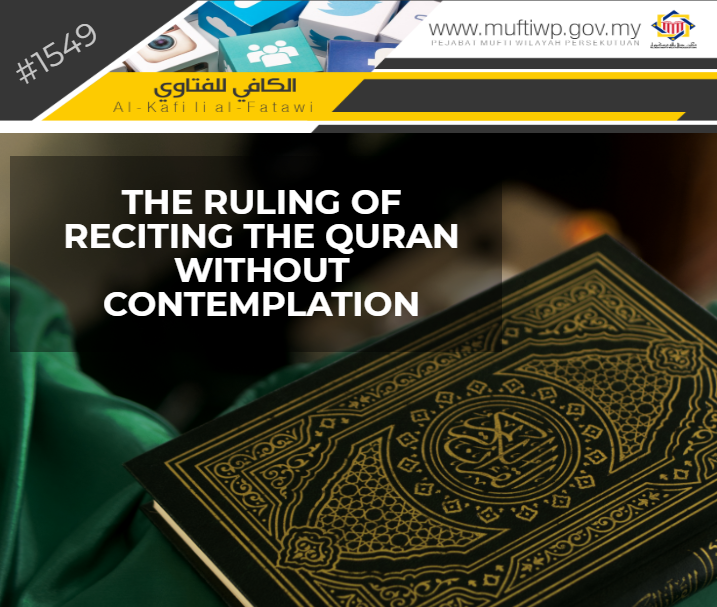 As the mukadimah of this discussion, we will present several evidences regarding the advantages of reciting the Quran according to the following narrations:

From ‘Aisyah R.Anha, the Prophet PBUH once said:

“One who is proficient in the Qur'an is associated with the noble, upright, recording angels; and he who falters in it, and finds it difficult for him, will have a double reward.”

Al-Imam al-Nawawi Rahimahullah state that a person who experienced difficulty in reciting the Quran will receive double rewards for his efforts. [See Al-Minhaj Syarh Sahih Muslim (6/85)]

From Uthman RA, from the Prophet PBUH:

“The best among you is he who learns and teaches the Qur'an.”

Allah SWT honours and bless those who learn and teach the Quran. [Refer Fath al-Bari Syarh Sahih al-Bukhari (15/152)]. The wisdom from the hadith is that Muslims are sanctioned to learn the Quran whether it is to teach it, right one’s recitation, understanding the meaning and practising and implementing the rulings set in al-Quran [Refer Nuzhat al-Muttaqin Syarh Riyaad al-Salihin (740)]

The Sanctioning of Reciting the Quran and Contemplating on It

Contemplation (tadabbur) lexically means thinking deeply on something. It has a similar meaning to the word tafakkur. However, the meaning of tafakkur is thinking with one’s heart or thinking through the evidences. [See Ta’lim tadabbur al-Quran al-Karim Asalib Amaliyyah wa Marahil Manhajiyyah,(11)]. While, Ibn Kathir define tadabbur as understanding the words and contemplating on the implied meaning, advice and warning until one’s heart is moved, taking lessons from the verses recited and obeying His commandments. [See Tafsir al-Quran al-Azim (1/8)]

The purpose the Quran is revealed is not only to be recited but Allah SWT commanded His slaves to appreciate and contemplate on the meaning of the Quran. Allah SWT states:

“[This is] a blessed Book which We have revealed to you, [O Muhammad], that they might reflect upon its verses and that those of understanding would be reminded.”

Imam al-Tabari said that the meaning of the verse is to state the purpose of the revelation of the Quran is so that the ummah of the Prophet PBUH could reflect, contemplate and understand the meanings of the verses of the Quran and practising all of the commandments. [al-Jaami’ al-Bayan ‘An Ta’wil Aayi al-Quran, al-Thabari (20/79)]. Thus, one should understand the content of al-Quran so that he can take lessons from it and practise it in his daily lives.

Next, there is a warning against those who recite the Quran but refuse to learn or try to understand the meaning of the Quran as stated by Allah SWT:

“Then do they not reflect upon the Qur'an, or are there locks upon [their] hearts?”

According to the above verse, it can be understood that those who recite the Quran without contemplating or reflecting on the meaning of the Quran, then their hearts would be locked from accepting the truth for their ignorance of the content of the Quran. It is a curse for those who refuse to try to understand the meaning of the verses of the Quran when he is reciting them. Furthermore, the verse is also a commandment for people to understand, reflect and contemplate on the content of the Quran. [Tafsir adhwa’ul Bayan tafsiral-Quran bi al-Quran (7/458)]. Beyond the understanding of the verses recited, it can also be understood that with contemplation of the Quran, then guidance and wisdoms from Allah SWT would easily enter their hearts.

To conclude, according to the evidences presented, it can be understood that reciting al-Quran without understanding the meaning of the recitation will still be rewarded. However, reciting the Quran as well as understanding its meaning is far better when compared to reciting the Quran without understanding it. Thus, the Muslim ummah is urged to understand the meaning of it and appreciate the content of Allah SWT’s words in order to learn lessons and practise all of His commandments and avoiding His prohibitions. Contemplation and reflection of the Quran are greatly encouraged to move the hearts of people at the same time making al-Quran as guidance in everyday lives.

Lastly, let us all strive to understand kalamullah and supplicate so that al-Quran could be our saviour in the hereafter as stated by the Prophet PBUH:

"Read the Qur'an, for it will come as an intercessor for its reciters on the Day of Resurrection."