AL-KAFI #1561: THE RULING OF PERFORMING SUNNAH ABLUTION PRAYER DURING THE TIMES WHEN IT IS MAKRUH TO PRAY 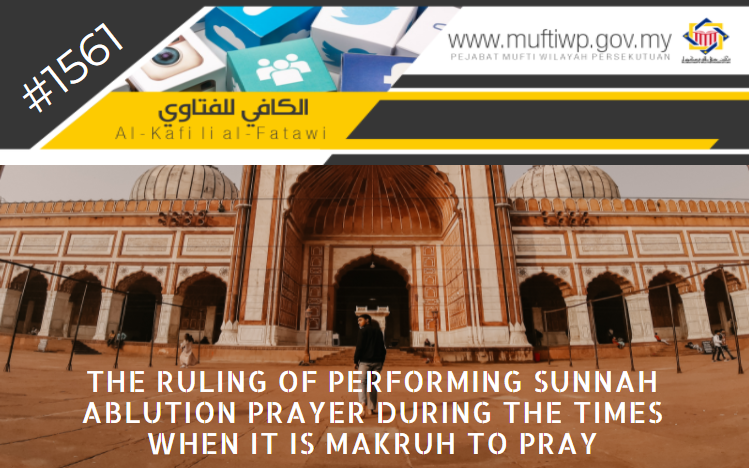 Assalamualaikum ustaz, what is the ruling for a person who performs the sunnah ablution prayer during the time when it is makruh (undesirable) to pray?

Sunnah ablution prayer is one of the sunnah prayers sanctioned and tsabit according to syarak. This is according to a hadith narrated by ‘Utsman bin ‘Affan, where he said the Prophet PBUH said:

Imam al-Ramli argued using the above hadith in explaining the sanctioning of the sunnah ablution prayer saying: Two rakaat is sunnah for ablution by which the person prays two rakaat after his ablution with the intention of sunnah prayer. Refer Syarah Zubad, Al-Ramli (pg. 48).

While regarding the issue of times when it is makruh to pray, Syeikh Taqiyuddin al-Hisni stated these times are:

Coming back to the question presented, we share the statement of Imam al-Nawawi who said:

Subsequently, in another statement of Imam al-Nawawi, he stated several examples of prayers with a reason:

Among the prayers with a reason is missed prayers, whether it is obligatory or sunnah prayers when we state the sahih opinion which states it is sunnah to replace nafilah (Sunnah) prayers which are missed, then it is permissible for a person to qadha’ missed obligatory and sunnah rawatib prayers during these times of which they had make it (sunnah rawatib prayer) their usual or common prayers. And it is also permissible for a person to perform nazar and janazah prayers, the prostration of gratitude and tilawah, as well as sunnah eclipse and tawaf prayers.

The dalil (evidence) which states that it is permissible to perform these prayers with a reason during the times when it is restricted to pray is in accordance with a hadith narrated by Qais bin ‘Amr, where he said:

Thus, the silence of the Prophet PBUH explains that he did not restrict the Companion from performing sunnah prayer with a reason after the obligatory subuh prayer.

Regarding the issue of performing sunnah ablution prayer during the restricted times to pray, Imam al-Nawawi mentioned the issue stating:

If a person performs his ablution during the makruh (undesirable) times, then it is permissible for him to perform two rakaat sunnah ablution prayer as clearly stated from our ashab.