AL-KAFI #1563: THE RULING OF A PERSON SPLASHING RAINWATER ON HIMSELF 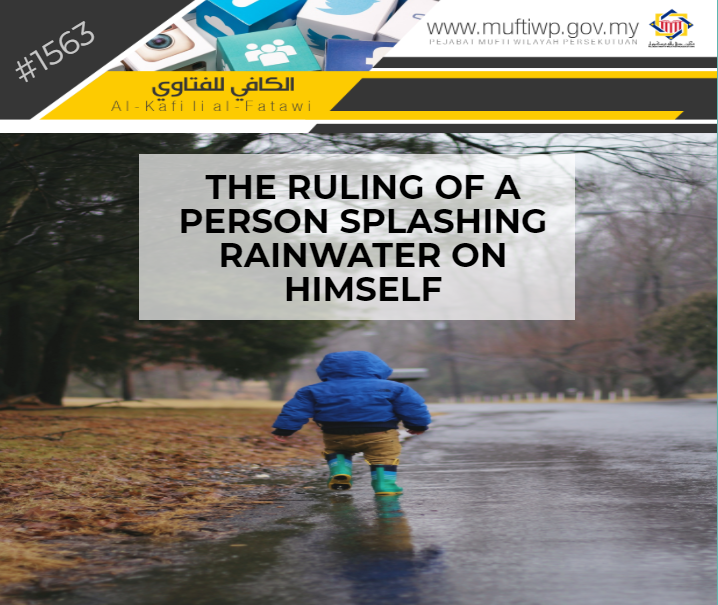 Assalamualaikum ustaz, is it true that we are encouraged to splashing some rainwater on ourselves as soon as it rains? Is there any evidence in this issue and why is this so?

Among the sunnah that is seldom practised in today’s society is wetting a part of one’s body with rainwater from the sky. This action is tsabit from the Prophet PBUH according to a hadith narrated by Anas bin Malik RA, where he said: It rained upon us as we were with the Messenger of Allah (ﷺ). The Messenger of Allah (may peace be upon him) removed his cloth (from a part of his body) till the rain fell on it. We said: Messenger of Allah, why did you do this? He said:

“It is because it (the rainfall) has just come from the Exalted Lord.”

Imam al-Nawawi in his commentary of the above hadith stated: “Indeed, rain is a blessing and has just been created by Allah SWT then tabarruk (taking blessing) is performed.” Refer to Syarah Al-Nawawi ‘ala Muslim (6/195).

Syeikh Zakariyya bin Muhammad al-Ansari argued using the above hadith saying: “And it is sunnah for a person to go out and pull back his clothing (other than that is covering his awrah) so that rain will fall on his body.” Refer Asna Al-Mathalib (1/293).

Subsequently, in explaining the action, Syeikh Zakariyya wrote a narration from Ibn Abbas R.Anhuma where he was asked about the action, then Ibn Abbas answered: “Did you not recite the statement of Allah SWT:

“And We have sent down blessed rain from the sky,”

Thus, Ibn Abbas said: “I would like to receive some of its blessings.” Refer Asna Al-Mathalib (1/293).

Imam al-Baghawi in his commentary of the above verse said: It (the blessed water) is in terms of goodness and benefit of it for every living creature and it is rainwater. Refer Ma’alim al-Tanzil, Al-Baghawi (4/271).

Some scholars stated that the body part that one should let rain to fall on is the head. This is the opinion of Syeikh Mulla ‘Ali al-Qari. While al-Thibi said that it refers to the body. In a hadith narrated by al-Hakim, it is stated that the Prophet PBUH pulled up his clothing exposing his back. Refer Mirqat al-Mafatiih, Mulla ‘Ali Al-Qari (3/1108).

As a conclusion, we would like to state that wetting some parts of one’s body which are not awrah with rainwater is sunnah. The literal meaning of the hadith did not mention when should one do this, whether it is in the beginning, middle or ending of the rainfall. However, it is encouraged to do this at the beginning of the rain for it is attributed to a new blessing sent down by Allah SWT.

Lastly, may Allah SWT give us the correct understanding in practising His religion. Amin.