AL-KAFI #1565: IS IT CONSIDERED AS NUSYUZ IF A WIFE ASKED FOR FASAKH IF HER HUSBAND IS DISABLED? 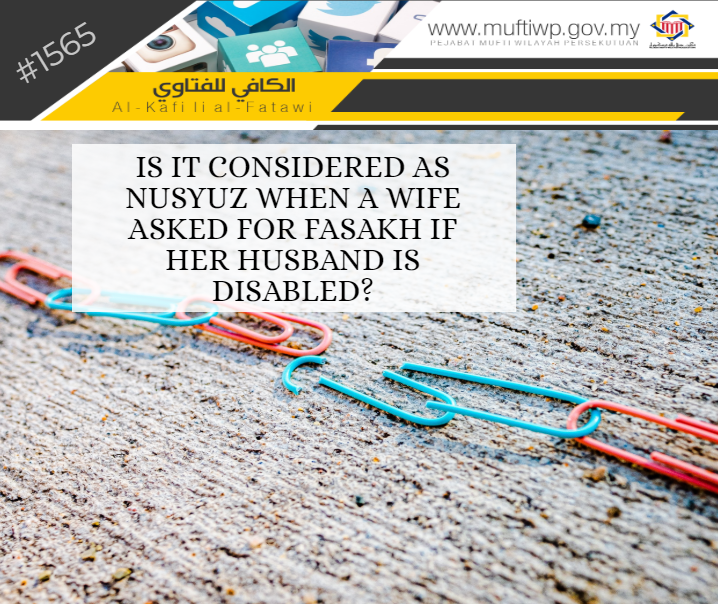 Assalamualaikum. Is it considered nusyuz if a wife ask for fasakh if her husband has a disability?

We will discuss the concept of nusyuz for a wife and matters that make it permissible for a wife to ask for fasakh in order to answer the questions and perception of nusyuz and asking for fasakh if her husband has a disability.

Nusyuz is defined as disobedience towards a husband on matters which Allah SWT has obligated for her. The scholars from the four madhhabs agreed that a nusyuz wife means a wife who disobeys her husband.

Among the reasons that a woman will be considered as nusyuz is when she went out of her house or go travelling without the permission of her husband, refusing to open the door for her husband to enter the house and refuse to have intercourse with her husband without reasons that are permitted by syarak. (See al-Fiqh al-Manhaji, 2/102-103). However, nusyuz will only be convicted after a thorough hearing which involves procedure and case representation in court proceedings.

While for the meaning of fasakh, it is an exit from a marriage when there are certain disabilities in the marriage decided by syarak. Basically, the jurists listed several disabilities which make it permissible for a wife to ask for fasakh. There are seven listed disabilities, which are insanity, leprosy, vitiligo, obstruction of the vagina, deformed private parts, erectile dysfunction, and dissevered penis. [See al-Mu’tamad (4/96)]

Disability for a husband or wife is divided into two:

These disabilities clearly prevent the purpose of marriage. However, if the disability of the husband can be treated, then the reason that permits fasakh is abrogated. [al-Fiqh al-Manhaji (2/ 109)]. Fasakh cases will have to undergo court hearing and procedures in the shariah court for only a judge has the authority to annul a marriage.

To conclude, according to the above-presented arguments, a wife is not considered as nusyuz but it is her right to ask for fasakh if the husband has a disability that has been stated in syarak. For these cases, a wife should present the medical evidence to the shariah court. However, if her husband’s illness or disability is not included as matters that permit fasakh and it is treatable, then it is best for the wife to stay with her husband and care for him trying alternative treatments for the well-being of her husband. Lastly, may Allah SWT grant us deep understanding in religion. Amin.