AL-KAFI #1567: IS IT PERMISSIBLE TO STATE THAT THERE ARE TWO GODS ACCORDING TO VERSE 51 SURAH AN-NAHL? 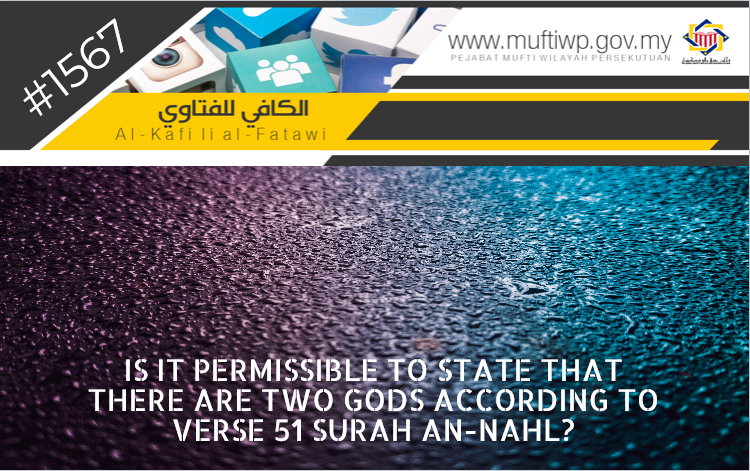 Assalamualaikum Datuk Mufti. One of our congregation asked for an explanation of the commentary of verse 51 surah al-Nahl (the 16th surah) which states “Don’t worship TWO GODS,”. Can we say that there are two gods?

Al-Quran is a holy book complete with the constitution and rulings of Islam. Al-Quran is revealed to the Prophet PBUH as a revelation that is maintained and protected until the day of Judgement. Allah SWT states:

“Indeed, it is We who sent down the Qur'an and indeed, We will be its guardian.”

Surah al-Nahl is a makkiyyah surah which consists of 128 verses. Syeikh al-Maraghi said, three of the last verses is revealed between Mecca and Madinah. (See Tafsir al-Maraghi, 14/51)

Dr Wahbah Zuhaili in his commentary said, (Al-Nahl) means bee, the name of the surah is based on two of its verses which explains about how Allah SWT give inspiration to the bee on how to collect nectar from flowers which will turn into honey and be a cure for people. Allah SWT states:

“There emerges from their bellies a drink, varying in colors, in which there is healing for people.”

The extraordinary story is depicted in the Quran so that people will contemplate and observe the wonderful and miraculous creations of Allah SWT and they are all proof of His existence. Furthermore, the surah is also named as al-Ni’am (النّعم) for the numerous stories of the blessings of Allah SWT recorded in it. (See al-Tafsir al-Munir, 14/79)

The Commentary of Surah al-Nahl Verse 51

Coming back to the question asked, we present the commentary of several scholars in explaining the statement of Allah SWT:

And Allah has said, "Do not take for yourselves two deities. He is but one God, so fear only Me."

Syeikh Abdul Rahman al-Sa’di said, Allah SWT commanded us to worship only towards Him and do not associate Him with anything. (See Tafsir al-Sa’di, 1/442)

Syeikh Abdul Rahman al-Sa’di said the verse explains to us that no one should commit syirk and associate Allah SWT with anything. (See Tafsir al-Sa’di, 1/442)

Imam al-Suyuti and Imam Mahalli said, the verse (اثْنَيْنِ) is a supporting sentence (ta’kid) for the following verse (إلَه وَاحِد) to reinforce the One and Only attribute of Allah SWT. (See Tafsir al-Jalalain, pg 352)

Syeikh Mutawalli al-Sya’rawi in his commentary explained, that according to the Arabic language style, when a supporting verse (ta’kid) is presented, then the following verse is the verse that narrates the main purpose (murad). (See Tafsir al-Sya’rawi, 13/7993).

This is as stated by Dr Wahbah Zuhaili in his commentary, where the verse (إِلَـٰهَيْنِ اثْنَيْنِ) is the supporting sentence (ta’kid) which is presented with two synonyms. The purpose is to strengthen the denial towards numerous gods. Afterwards, Allah SWT revealed an explanatory verse and affirmation of His One and Only attribute through the verse (إنَّمَا هُوَ إلَه وَاحِد). This is to explain the existence of One and Only god, denying the existence of numerous gods. (See al-Tafsir al-Munir, 14/154)

Coming back to the question asked and the explanation given by scholars, it can be concluded that in verse 51 surah al-Nahl, Allah SWT state a denial verse as an explanation to not associate Allah SWT by not worshipping other than Him. Then Allah SWT revealed an affirmation verse to explain His One and Only attribute. This is due to the usage of Arabic style of writing used in the Quran in explaining a certain matter.

Thus, to understand the meaning of the verse, it can be concluded that Allah SWT prohibits His ummah from worshipping other than Him and prohibit associating Him with anything.

Thus, as Muslims it is wajib for us to believe that there is no god to be worshipped other than Allah SWT. Allah SWT states:

“Allah - there is no deity except Him, the Ever-Living, the Sustainer of [all] existence.”

May Allah SWT give us understanding in practising His commandments and worshipping Him in accordance with what has been taught by the Prophet PBUH as commanded by Allah SWT.