AL-KAFI #1568: THE RULING OF WEARING TIGHT CLOTHING IN PRAYER DURING A RUN 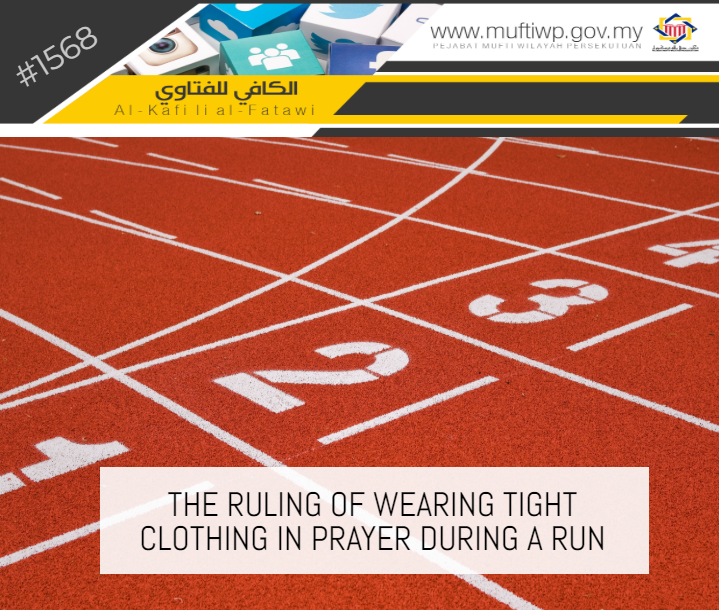 Assalamualaikum. I want to join runs which are mostly an early morning event even before the subuh prayer time. My question is are our prayer valid if we (women) pray while wearing our sports attire such as wearing tights, knee-length skirt and a short-sleeved t-shirt with an inner. Is this situation considered as darurat (exigent situation) in the ethics of clothing?

Covering awrah is one of the valid conditions of prayer. Allah SWT states:

“O children of Adam, take your adornment at every masjid,”

The meaning of awrah according to syara’ are body parts which are wajib to be covered or haram to be seen.

In short, the awrah of a woman is different according to the different situations she is in:

We have also explained this matter in our previous articles regarding the clothing of men and women:

According to Imam al-Nawawi in his book al-Majmu’ Syarh al-Muhazzab, he stated that it is wajib to cover the awrah with any kind of clothing that will cover the skin color and this is not possible with thin clothing. Covering awrah is enough with any type of clothing, regardless of the material it is made of such as leather, paper or woven leaves, as long as the skin color is not visible. [Refer al-Majmu’ Syarh al-Muhazzab 3/171]

Al-Khatib al-Syarbini explained in his book that a person’s prayer is not invalidated if she wears tight clothing that her body shape is visible however it is makruh (undesirable), while it is not prioritized for men (khilaf al-Aula). [Refer Mughni al-Muhtaj 1/398]

Thus, coming back to the above question, the prayer of a person is valid as long as the skin color is not visible. However, this matter does not mean that it is encouraged to wear tight clothing when one is praying. The best would be to fulfil the shariah as well as avoiding oneself from fitnah.

Here we would like to state that running activities are not considered as an exigent situation that makes it permissible for a person to wear tight or thin clothing. The reason is the meaning of darurat (exigent situation) is when a person is forced to do something which is usually prohibited in order to save himself from great harm and destruction. [Refer al-Asybah wa al-Nazo’ir li al-Suyuthi pg 85]

Thus, a Muslim should try his best to wear shariah-compliant clothing. This is not only commanded when we are praying but in our lives.

To conclude, according to the question asked, the prayer of a person wearing tight clothing is valid as long as the skin color is not visible. However, it is makruh (undesirable) for a woman to wear tight clothing regardless of whether she is praying or otherwise, for it showcases her body shape. Hence, we advise all participant in running activities to wear or provide loose-fitting clothing when she is participating in such activities.

The Prophet PBUH said in a hadith narrated by Abu Hurairah RA:

“Two are the types of the denizens of Hell whom I did not see: people having flogs like the tails of the ox with them and they would be beating people, and the women who would be dressed but appear to be naked, who would be inclined (to evil) and make their husbands incline towards it. Their heads would be like the humps of the bukht camel inclined to one side. They will not enter Paradise and they would not smell its odour whereas its odour would be smelt from such and such distance.”

Thus, a Muslimah woman should be mindful and cover her awrah in front of other ajnabi of which if not, it could lead to fitnah.

Lastly, may all of us always be in the protection and care of Allah SWT and blessed with a steadfastness of faith with guidance from Him. Wallahua’lam.