AL-KAFI #1569: INTERCOURSE WITH WIFE ASSUMING THAT HER MENSTRUATION HAS ENDED 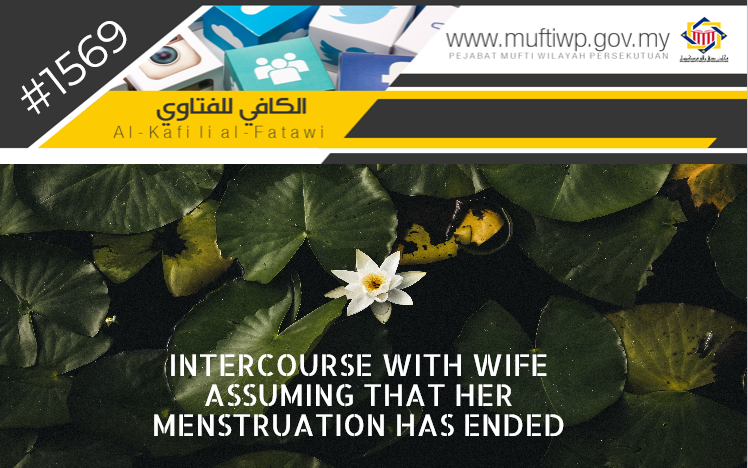 Islam prohibits husband and wife from having intercourse when the wife is menstruating. This prohibition is stated through the statement of Allah SWT:

And they ask you about menstruation. Say, "It is harm, so keep away from wives during menstruation. And do not approach them until they are pure."

Imam al-Mawardi commented on the above verse said: “What is meant with al-I’tizal in the verse is divided into three opinions;

If intercourse happens during menstruation or before the obligatory bath, then it is considered sinful and it is sunnah to pay the kaffarah (fine) to the poor and needy. This is in accordance with a hadith from Ibn Abbas R.Anhuma:

The payment should be made by the husband and not the wife for the husband is performing the intercourse. The same goes if the intercourse happens when the menstruation has ended but she has not yet performed the obligatory bath, then she is considered the same as a woman who still experience yellowish bleeding. Which means that it is sunnah to pay the fine of half a dinar. Refer al-Iqna` by Imam al-Khatib al-Syarbini (146-147)

However, if the intercourse happens due to one’s ignorance regarding menstruation and a mistake, then the husband and wife is not considered as a sin and it is not commanded for the husband to pay the fine.

Imam al-Nawwi Rahimahullah: “The Muslim ummah had agreed on the prohibition of intercourse with a menstruating wife according to the holy verse (in the Quran) and sahih hadiths. Al-Mahamili said in al-Majmu’: Imam al-Syafie Rahimahullah said: Whoever commit it has committed a great sin. Our ashab and others said: Our ashab said that whoever commits it (had intercourse during menstruation) due to ignorance of the menstruation, or ignorance on its prohibition or forgetfulness, or forced, then it is not considered as a sin and there is no kaffarah (fine). This is according to the hadith of Ibn Abbas R.Anhuma where the Prophet PBUH said:

"Allah has forgiven my nation for mistakes and forgetfulness, and what they are forced to do."

This hadith is hasan, narrated by Ibn Majar, al-Baihaqi and others. Refer al-Majmu` Syarh al-Muhadzzab (2/359)

According to the above facts and explanation, the ruling of a husband purposely having intercourse with his wife during her menstruation is prohibited, a major sin and it is obligatory for him to repent. The same is applicable for the wife if she is willingly participating for it is considered as helping towards a sin. As for husband and wife who commit it because it is a mistake assuming that the menstruation has ended, when it hasn’t, then they are not considered as sinful.

Hopefully, this explanation will benefit us all.