AL-KAFI #1570: THE RULING OF PERFORMING AQIQAH FOR A CHILD WHO PASSED AWAY 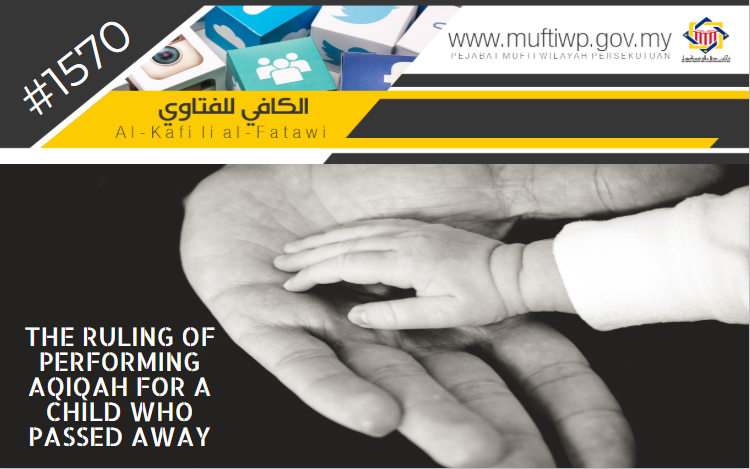 We start our discussion with the words of the Prophet PBUH:

"'Aqiqa is to be offered for a (newly born) boy, so slaughter (an animal) for him, and relieve him of his suffering."

This hadith is the evidence on the sanctioning of aqiqah when a baby is born. It is sunnah muakkadah for those who are capable. (See al-Majmu’ Syarh al-Muhazzab, 8/426). It is sunnah to be performed on the seventh day of the birth of the child as well as naming the child with a good name and shaving the head of the baby. This is according to the statement of the Prophet PBUH, from Samurah RA:

“A boy is in pledge for his Aqiqah. Sacrifice is made for him on the seventh day, his head is shaved and he is given a name.”

According to the above hadith, it can be understood that when a baby is born, it is sunnah to perform aqiqah for the child of two goats for a boy and one goat for a girl. This is in accordance with a hadith of the Prophet Muhammad PBUH:

“If anyone has a child born to him and wishes to offer a sacrifice on its behalf, he may offer two resembling sheep for a boy and one for a girl.”

Regarding the duration that aqiqah is sunnah, this has been discussed in our article titled AL-KAFI #633: THE RULING OF AQIQAH FOR YOURSELF. According to this article, we stated that neglecting aqiqah without any excuse is makruh (undesirable) but is not sinful. While if a person does not perform aqiqah because he is incapable, then it is neither haram nor makruh (undesirable).

Some contemporary Syafi’i scholars hold the opinion that it is no longer sunnah to perform aqiqah for a person who was incapable to perform the aqiqah but then become able to do so after the seventh day of the birth of the child. While other Syafi’iyyah scholars state that the duration is until the end of the nifas (post-natal bleeding). The rajih opinion of madhhab al-Syafie stated that it remains as sunnah until the child reaches puberty.

Coming back to the question asked, if a child passes away, is it still necessary to perform aqiqah for the child? Here, scholars have differing opinions on this issue.

First opinion: If the child dies before the seventh day of his birth, then it sunnah to perform the aqiqah for him the same as it is sunnah to perform it for a living child. This is the opinion held in madhhab Syafi’e

Second opinion: It is not sunnah to perform aqiqah for the child. This is the opinion of Hasan al-Basri and Imam Malik.

However, if the child dies after the seventh day of his birth and the parents is capable, then there are two opinions as stated by Imam al-Rafi’ie. The first opinion is it is sunnah to perform aqiqah for the child and this is the rajih opinion. Whereas the second opinion states that it is abrogated along with the death of the child. (See al-Majmu’ Syarh al-Muhazzab; 8/432)

We include the opinions of scholars if the foetus passes away or miscarried, is it sunnah to perform aqiqah for the foetus? In this matter, we cited the words of Ibn Hajar al-Haitami from his book:

Indeed, aqiqah is sunnah on a miscarried foetus after the soul has been blown in it. And if the soul has yet to be blown, then it is an object of which will not be resurrected and there is no benefit for it in the hereafter, thus, aqiqah is not sunnah for it. This differs with a foetus of which soul has been blown into it for indeed, it was alive and will be resurrected in the hereafter and its intercession is beneficial. Previous scholars have stated: Whoever did not perform aqiqah for his child, there is no intercession for him (from his child) in the hereafter. It can be understood from their statement that aqiqah depends on the ability of the child to intercede, which means a child who has been blown with a soul, the same for the sunnah ruling which binds to it.

Here, we also include the words of Imam Ahmad bin Hanbal in this issue where he states: “It (aqiqah) is under the chapter of syafa’at (intercession).” It means that if the aqiqah is not performed for the child, then afterwards the child passes away, then the child will not intercede for his parents.

To conclude, according to the above explanation, we can conclude our answer into the following points:

Lastly, we pray to Allah SWT to be given understanding in His religion, firming our belief and faith, placing facilitation and ease in ourselves to perform worship and subsequently may Allah SWT accept all our deeds.