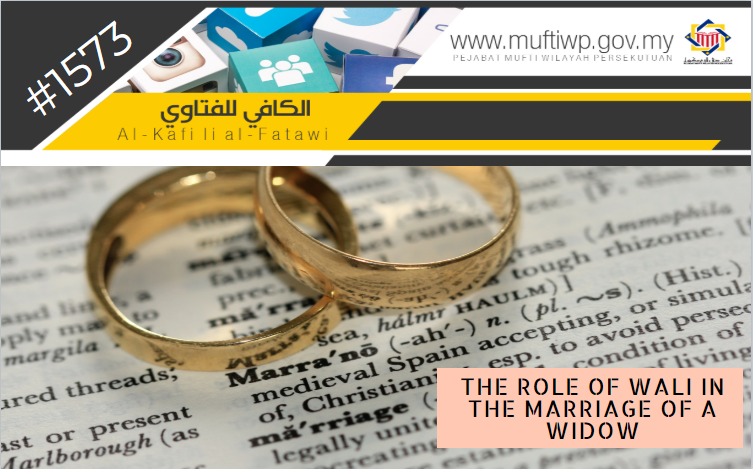 Assalamualaikum SS Mufti. A widow wishes to marry without the knowledge of her wali (guardian/authority over a woman) and she told me that for a widow she doesn’t need wali to get married. Is the statement of the widow true? Is it permissible for a widow to marry without her wali and that a wali is only wajib for a virgin?

Every marriage must fulfil the requisites and valid conditions set by syarak. Wali is one of the requisites of marriage, the majority of jurists hold the opinion that the marriage of a woman without her wali is invalid and void. There is no difference between a virgin or widow.

In a hadith, the Messenger PBUH said:

"A woman may not marry off another woman, nor may she give herself in marriage."

The wisdom of wali in marriage is sanctioned according to the usual custom that it isn’t proper for a woman to perform her own aqad. The reason is the attribute of shyness women possess. (See al-Fiqh al-Manhaji 4/61)

Wali in marriage is divided into wali mujbir and wali ikhtiyar. Wali mujbir is only the father or paternal grandfather. Wali ijbar can only marry off a virgin female either a child or an adult, rational or with mental instability without her consent or willingness. The reason is wali mujbir has greater knowledge of the benefit for his daughter and love towards her. However, forcing one’s virgin daughter to marry the choice of her wali is not prioritized. It is prioritized and sunnah to ask for her consent as a sign of respect and sparing her feelings.

Thus, a wali mujbir who gives her daughter for marriage must fulfil the following conditions:

It is different if the daughter is a widow. A widow is impermissible to be married off without her consent or willingness even if the wali is her own father. This is based on the hadith of the Messenger PBUH:

The wisdom of first getting the consent of a widow before marrying her off is because she has understood the purpose of marriage. Her experience from her previous marriage makes it easier for her to be frank in stating her consent. (See al-Fiqh al-Manhaji 4/65-67)

In short, every marriage for a woman, regardless of whether she is a virgin or a widow, it is invalid without a wali. It is impermissible for a wali to marry off a widow without her consent, however, it does not mean that a widow can get married without a wali. This is in accordance with a hadith:

“There is no marriage except with a guardian.”

May Allah SWT give us clear and sahih understanding in His commandment in the shariah of Islam. Wallahua’lam.