AL-KAFI #1576: THE RULING OF WIPING THE BODY PARTS (الدَّلك) WHEN PERFORMING ABLUTION OR TAKING THE OBLIGATORY BATH 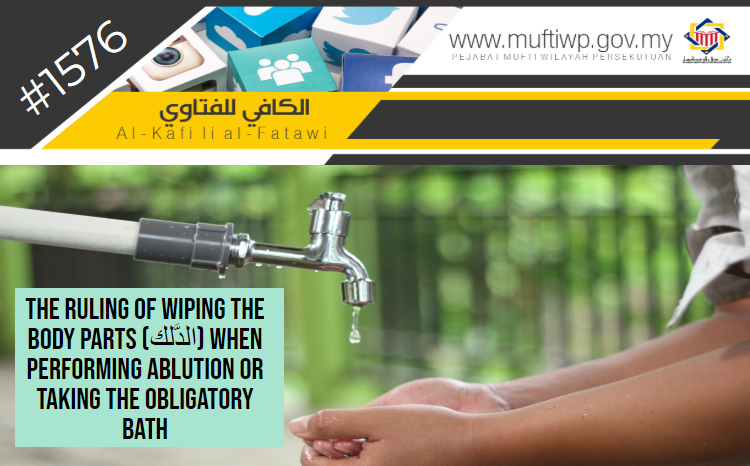 Assalamualaikum SS Mufti, is the ablution of a person valid if he just washes his hands and feet (let water flow) without wiping (with one’s hands) the body parts of ablution. And what about the obligatory bath?

Ablution is one of the valid conditions of prayer and it is wajib. This is stated in a statement of Allah SWT:

The above verse explains several body parts that are wajib to be washed and wiped for ablution. They are the face, both hands up to the elbow, head, feet up to the ankles.

Referring to the question presented, this issue actually involves the discussion of Fiqh scholars regarding the ruling of wiping the body parts after it is washed with water. In Arabic, this action is known as الدلك. Lexically, it means: Wiping one’s hands on the body parts. Refer Mu’jam Maqayis al-Lughah, Ibn Faris (2/297).

In madhhab Imam al-Syaf’ie, the act of wiping the body parts for ablution to massage or rub the water is included in the category of sunnah matters when performing ablution. Imam al-Nawawi when explaining the sunnah and mustahab matters in ablution stated:

“And a person wipes his body parts for ablution.”

Likewise, it is stated in the book al-Fiqh al-Manhaji (1/59) that among the sunnah matters in ablution is الدلك. Which means using one’s hands to rub on the body parts of ablution when washing them. The author argued using a hadith narrated by Abdullah bin Zaid RA, where he said:

“Indeed, the Prophet PBUH performs his ablution and do this where he wipes (his body parts for ablution).”

And I like if he wipes with what he is able towards his body. However, if he did not do so and water reaches all parts of his body then it is sufficient. Refer Al-Umm, Al-Syafi’e (1/57).

As we know, both ablution and obligatory bath is similar in which both are purification methods from hadas. Ablution purifies minor hadas and obligatory bath purifies major hadas. Thus, both are the same situation in terms of even if a person just washes the body parts without wiping them, then it is enough and sufficient.

To conclude, we would like to state that it is sunnah to wipe the water on the body parts of ablution. Thus, if a person who is performing ablution just washes his body parts for ablution such as placing his hands or feet under the tap, then his ablution is valid. The same for obligatory bath.

However, if by not wiping the body parts while performing the ablution or obligatory bath then water does not reach the whole area of the body part, then the ruling of wiping and rubbing it to ensure that the water reaches the body parts changes to wajib.

Lastly, we pray to Allah SWT to be given with correct understanding in religion. Amin.