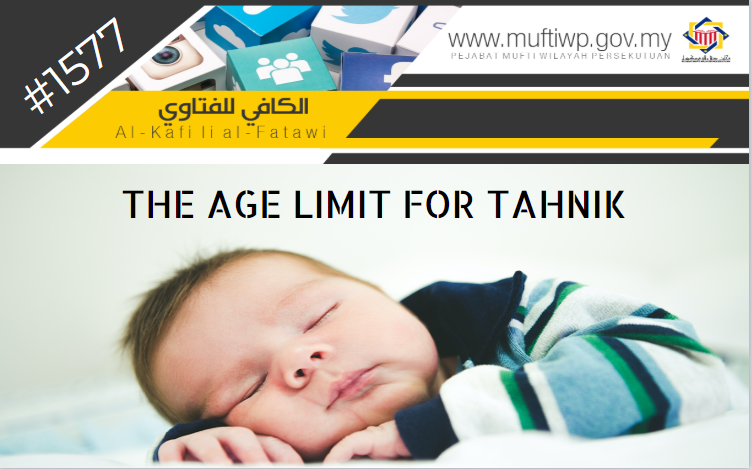 Assalamualaikum SS Mufti. I want to ask what is the age limit that it is sunnah for tahnik? Hope for an explanation from you. Thank you.

First, we have explained that the ruling for tahnik is sunnah, while the way to perform tahnik for a baby is with something sweet, the best would be with a date and performed by a pious and righteous person.

Coming back to the question asked, basically, it is sunnah to perform tahnik for a baby as soon as the baby is born. This is according to a hadith from Anas bin Malik RA who brought Abdullah bin Abu Talhah al-Ansari to the Prophet PBUH after Abdullah RA was born. He said:

I took 'Abdullah b. Abi Talha Ansari to Allah's Messenger (ﷺ) at the time of his birth. Allah's Messenger (ﷺ) was at that time wearing a woollen cloak and besmearing the camels with tar. He said: Have you got with you the dates? I said: Yes. He took hold of the dates and put them in his mouth and softened them, then opened the mouth of the infant and put that in it and the child began to lick it. Thereupon Allah's Messenger (ﷺ) said: The Ansar have a liking for the dates, and he (the Holy Prophet) gave him the name of 'Abdullah.

Regarding this matter, Imam al-Nawawi also stated in syarah Muslim:

“The practise of tahnik on the day the baby is born is sunnah according to ijma’ (consensus of the scholars) and the baby should be tahnik by a pious and righteous man or woman. It is sunnah to use date for tahnik.” (Refer Syarh al-Minhaj ‘ala Sahih Muslim, 14:123)

Furthermore, Imam al-Bukhari has named a chapter in his Sahih:

Chapter which stated the action of naming and tahnik of a baby on the evening of his birth even before the aqiqah. (Refer Fath al-Bari Syarh Sahih al-Bukhari, 9:399)

Imam Ibn Hajar al-‘Asqalani when commenting on the title said the act of tahnik is bound with ‘the evening’ to follow the hadith which is placed under the chapter. The reason is if the baby is born in the morning, then the tahnik and naming is done in the evening. This shows that tahnik is sunnah on the day after the baby is born.

Likewise, in a hadith narrated in this chapter, from Abu Musa al-Asy’ari, he said:

“A son was born to me and I took him to the Prophet (ﷺ) who named him Ibrahim, did Tahnik for him with a date, invoked Allah to bless him.”

Imam Ibn Hajar al-‘Asqalani in his commentary on the hadith stated that it showed that Abu Musa RA quickly brought the new-born baby to the Messenger PBUH to be tahnik after being named. This means the Messenger PBUH hasten in matters such as naming a baby (and tahnik) on the first day the baby was born and it is unnecessary to wait until the seventh day. (Refer Fath al-Bari Syarh Sahih al-Bukhari, 9:502)

According to the above nas (dalil/evidence), it is clear that tahnik for babies is best performed on the same day the baby was born. If the baby is born in the morning, then the tahnik and naming should be performed in the evening without waiting until the seventh day. It should be hastened if there’s nothing preventing it. However, if there is anything that prevented it from being performed, such as the baby is in need of care or treatment in the hospital, then it is permissible to delay it until the seventh day or more after the baby has recovered.

To conclude, we would like to state that it is sunnah to perform the tahnik as soon as the baby is born and it is best if it is on the same day the baby is born. This is in accordance with the hadiths narrated which state the Companions immediately brought a new-born baby to the Messenger PBUH after a baby is born without waiting until the seventh day.

However, if there are anything that prevented this, then it is permissible to delay it a bit. If a long duration of time has passes, it is no longer sunnah to perform tahnik for the time and benefit of it has passed which is to teach the new-born baby to eat or drink. However, if it is still performed, then this is also permissible and hopefully, he will receive the hoped goodness and blessing, inshaAllah.

May Allah SWT give us the sahih understanding in His commandments as well as grant us taufiq and hidayah to worship Him sincerely. Amin.