AL-KAFI #1580: IS IT PERMISSIBLE FOR A STEP CHILD TO RECEIVE THE INHERITANCE? 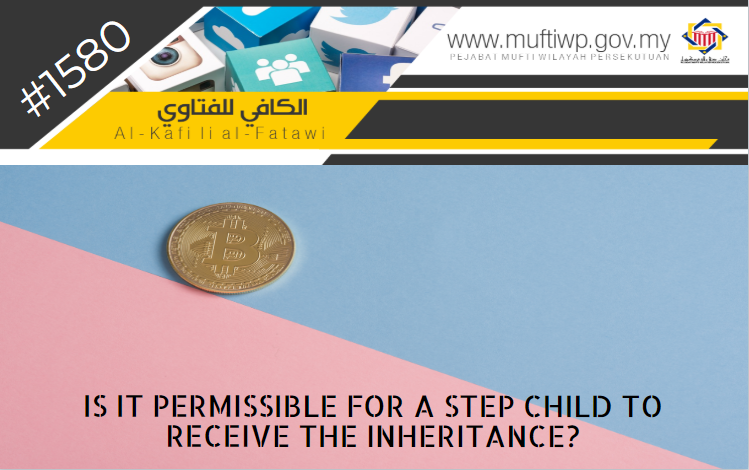 Assalamualaikum. I hope that the panel can answer my question. My mother slept with a man and got pregnant before she married my father and gave birth to a baby boy after her marriage with my father. After the death of both my parents, does my step brother has a right over the inheritance left by my father? I hope you can answer my question as soon as possible. That’s all.

First, in ensuring that a person has a right to receive a portion of an inheritance, they should be a relation or has a reason to inherit. According to the Islamic Law of Inheritance, there are three reasons for a person to receive the inheritance; nasab (blood relation), marriage and al-wala’. The focus of this discussion will only be on nasab and marriage according to the situation of the above question which involves a wife, child and step child.

Nasab means family ties between an heir (of the deceased) and heirs through blood relations. They are from al-furu’ (children and grandchildren), al-usul (father and grandfather), al-hawashiyy (siblings, uncles and aunts) and other relatives.

Second, relations as a result of blood relations or marriage are different from one another in terms of the portion of the inheritance received. The people who have a closer relation with the deceased will be listed as the major recipients of the inheritance. The reason is the different rates are set by Allah SWT depending on the priority, responsibility and family arrangements.

However, it should be reminded, although step son does not have any right on the inheritance, it does not prevent other step siblings who receive the inheritance to be charitable and help to ease the burden and hardship by giving some pocket money, food and others to them voluntarily.

"Charity towards a poor person is charity, and towards a relation is both charity and maintaining the ties (of kinship)".

Lastly, when our religion limits a certain matter, it also opens a thousand other doors of goodness. Grab the opportunity to do good, hopefully, we will be showered with good blessings and rizq as well as blessed with ease in our lives, insyaAllah.