AL-KAFI #1581: IS BEING ALONE WITH DRIVING INSTRUCTOR FOR LESSONS CONSIDERED AS KHALWAT? 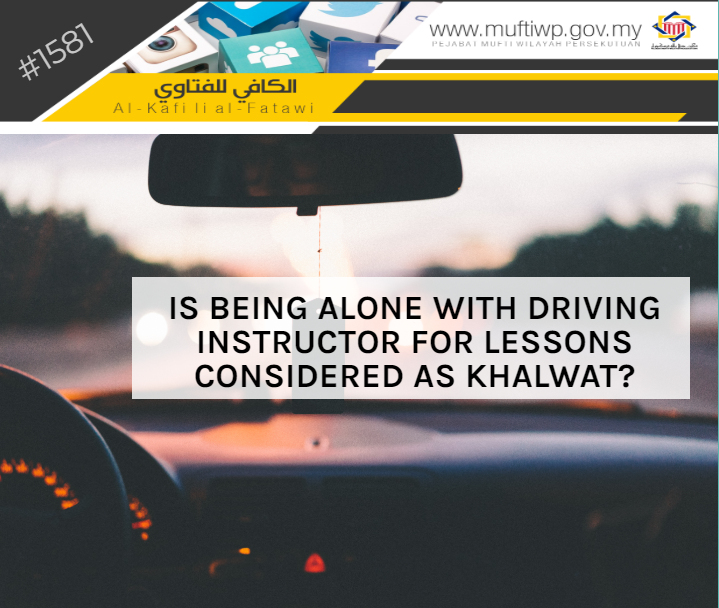 Assalamualaikum ustaz, during the driving test or driving lessons, if the student is alone with the instructor (of the opposite gender) in a car, is this considered as khalwat?

Khalwat literally means isolation or seclusion of a place or something. Which means there is no one or nothing there. Thus, when jurists discuss the issue of khalwat, they refer to the action of a non-mahram man and woman being together alone in a certain place.

The act of being alone for non-mahram couples is prohibited in Islam. This is according to a hadith narrated by Ibn Abbas RA, where the Prophet PBUH said:

" No person (man) should be alone with a woman except when there is a Mahram with her."

Imam al-Nawawi Rahimahullah when commenting on the hadith said: The meaning of the hadith is: “A man should not be alone with a woman unless there is a mahram with them. And if an ajnabi man committed khalwat with an ajnabiyyah woman without a third person, then the act is haram according to the consensus of scholars. The same ruling applies if the woman is together with a person that they would be ashamed of because of the person’s young age, such as a small child of two or three years old, the child’s presence is the same as if there is no one else.” Refer Syarah Sahih Muslim, Al-Nawawi (9/109).

Referring to the question presented, we include a hadith narrated by Anas bin Malik RA, where he said:

An Ansari woman came to the Prophet (ﷺ) and he took her aside and said (to her). "By Allah, you (Ansar) are the most beloved people to me."

If the above hadith is analysed in terms of the situation, the Prophet PBUH was originally with several people and not alone. Afterwards, the woman from Ansar came to meet the Prophet PBUH.  This is clear according to the words of Anas bin Malik “فَخَلاَ بِهَا” which means then he moved to a corner of the place where they can still be seen by others but they cannot hear the Prophet PBUH and the woman’s conversation.

Whereas Imam Ibn Hajar al-Asqalani said: It is impermissible to be alone with her (a woman) if they are concealed from others (if they can be seen by others, then it is permissible for them to be alone). The same applies (it is permissible) even if people cannot hear what they are talking about if what the woman wishes to consult about is something that she is ashamed to talk in public. Refer Fath al-Bari, Ibn Hajar (9/333).

To conclude, after we analyse the above evidences and arguments, we state that it is permissible for a male instructor and female student to be alone in a car for driving lessons. The reason is there are a lot of people in the area where the lessons will be conducted and people can see them together. The same goes if it is difficult to choose the instructor of the same gender when the driving school is short-staffed.

However, the manners and etiquettes, as well as the limitations of conduct, should be maintained and it is prohibited to have physical contact without reason. As believers, we should fear and be conscious of Allah SWT being aware that Allah SWT is the All-Knowing and All-Seeing of everything that we do.

We also suggest the authorized parties involved to permit a female student to bring along a friend or mahram in the process of learning, surely this is the best way according to syarak.

Lastly, we pray that Allah SWT gives us an accurate understanding in religion. Amin.