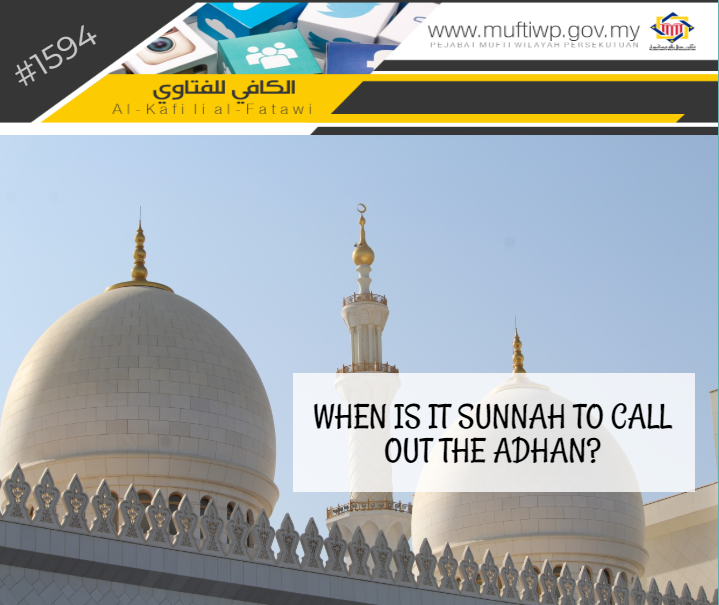 Assalamualaikum Sahibus Samahah Mufti. I once heard that calling out the adhan is sunnah in situations other than for calling out to people for the obligatory congregational prayer. Can I know when is it sunnah to call out the adhan other than the usual adhan we hear being called out in mosques and surau?

Allah SWT sanctioned the call of adhan to call the Muslim ummah to perform the congregational obligatory prayer together at the mosque. It is sunnah muakkad for Friday prayer and congregational prayer. (Refer al-Taqrirat al-Sadidah fi al-Masail al-Mufidah: 229)

It is sanctioned in the first year of hijrah. This is according to a hadith from Ibn Umar RA where he said: "When the Muslims arrived in Al-Madinah they used to gather and try to figure out the time for prayer, and no one gave the call to prayer. One day they spoke about that; some of them said: 'Let us use a bell like the Christians do;' others said, 'No, a horn like the Jews have.' 'Umar, may Allah be pleased with him, said: 'Why don't you send a man to announce the time of prayer?' The Messenger of Allah (ﷺ) said:

'O Bilal, get up and give the call to prayer.'"

It is sunnah for the adhan for prayer to be followed by iqamah before the prayer is performed. Among the purpose for the sanctioning of adhan are:

Furthermore, it is sunnah to call out the adhan and iqamah in several situations other than for prayer. Among them are:

To conclude, we would like to state that the types of prayer where it is sunnah to call out the adhan and iqamah is the five obligatory prayers, Friday prayer, jamak prayer and qadha prayer when performed consecutively. As for other prayers performed in congregation such as sunnah Eid prayers, eclipse prayer, then only call to prayer is sunnah.

Whereas calling the adhan that is sunnah outside prayer is when: in a grieving or sorrowful situation, anger, argument and when there is uncontrollable behaviour of a person, animal or fire and if there is an incident of possession of jinn. Furthermore, it is also sunnah to call the adhan and iqamah: near a new-born baby, when sending off someone going on travel and placing a deceased inside a grave. May Allah SWT give us the right understanding of His commandments and bless us with guidance so that we are able to worship Him with sincerity only for His sake. Amin.