AL-KAFI #1607: THE RULING OF BORROWING FROM THE TABUNG HAJI SAVINGS OF ONE’S CHILD TO INVEST IN ASB 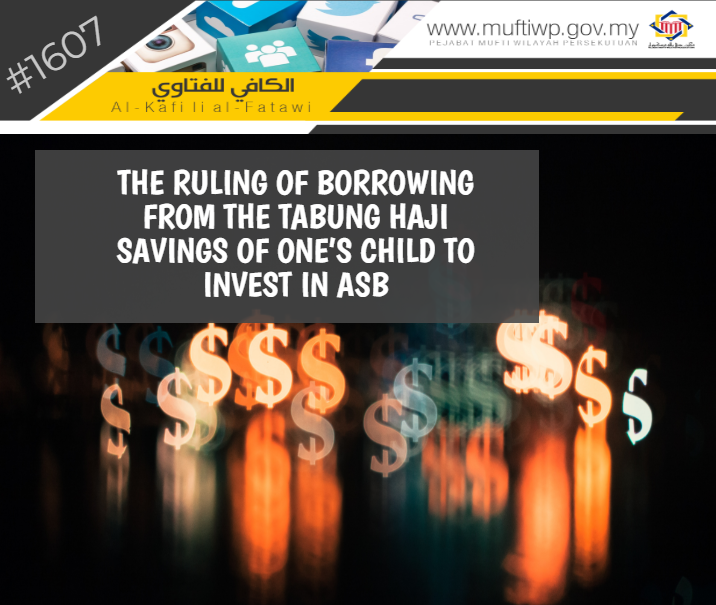 Assalamualaikum ustaz, I want to know what is the ruling for a mother to borrow the Tabung Haji savings of her child to invest it in Amanah Saham (ASB). After receiving the dividend, the mother returned the same amount borrowed from the child and use the dividend to fund the education fee. Hope for an explanation from you. Thank you.

There is no difference of opinions among scholars regarding the permissibility of giving a loan. It is a commendable act of worship for it helps to lighten the burden and provide for the necessities of a person in need, especially when the borrower is our own parents. From ’Abdullah bin ‘Umar RA, he narrated that the Prophet PBUH said:

From the point of view of the creditor, the original ruling of the permissibility of giving out a loan can change to an obligation and even prohibition considering the purpose the loan is needed. According to the above situation, the debtor intends to invest in ASB so that she can pay for the education fee when she received the annual dividend.

Regarding the ruling of investing in ASB, in line with the fatwa issued previously, it is permissible according to the decision made by the 80th National Muzakarah Fatwa Council Committee for Religious Matters in Malaysia which convened on 1-3rd February 2008 discussing the Ruling of Investing in ASN, ASB and Other Similar Investments.

The Muzakarah has decided that it is permissible to invest and receive the dividend from Amanah Saham Nasional (ASN) Amanah Saham Bumiputera (ASB) schemes. From the permissibility of investing in ASB, it is also permissible for a child to lend his Tabung Haji savings to his mother.

In terms of loan agreement between the debtor and creditor, one should understand the concept of loan. A monetary loan is known as Qarḍ in fiqh books and included under the category of yadd al-ḍhamān. The ruling for yadd al-ḍhamān in the chapter of monetary loan is that all of it should be returned to the creditor.

Considering every investment including ASB has its own risks of profit and loss, shariah has set that a person who intends to invest should be prepared to bear all the risks of the loss which may come from the investment in terms of poor return or total loss. As a consequence, shariah gives the right for the investor to receive the profit and dividend if the investment is profitable. This is in line with the Islamic legal maxim:

“Risks are parallel with profit.”

Subsequently, regardless of whether the investment bear profit or experience loss, the capital from the borrowed money should be returned. There is a misunderstanding that the necessity of paying the money back is only when the debtor profited from the investment, while if the investment turns to be a loss then there is no need to repay it.

To conclude, before making any loan transaction, the Muslim ummah is advised to first understand the concept and rulings involved such as the concept of investment and others related to it so that every action pertaining to the matter is in accordance with shariah.