AL-KAFI #1616: IS IT NECESSARY TO RAISE ONE’S HANDS FOR THE SUPPLICATION BEFORE SLEEPING? 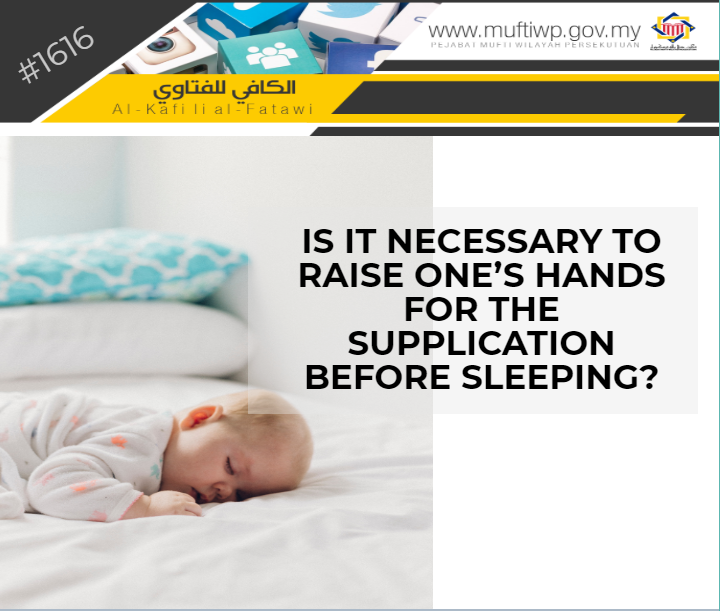 Assalamualaikum, is it necessary for me to raise my hands when I’m reciting the supplication before I go to sleep?

Supplicating to Allah SWT is an encouraged worship. Scholars have stated several reasons that will help a supplication to be accepted and granted. Among the reasons is by raising one’s hands when a person is supplicating. This is in accordance with a hadith narrated by Salman al-Farisi RA, where he said the Prophet PBUH said:

“Indeed, Allah is Hayy, Generous, when a man raises his hands to Him, He feels too shy to return them to him empty and rejected.”

Syeikh ‘Ubaidullah al-Mubarakfuri in his commentary on the above hadith said: In the hadith, there is an encouragement to raise a person’s hands when he is supplicating and place both hands close together. Refer Mir’aat al-Mafatih Syarah Misykat al-Masabih (7/363).

Coming back to the question presented, we will state the general act of raising one’s hands when supplicating is divided into three categories as the following:

First: Supplication Where It Is Encouraged to Raise One’s Hands

In several syarak evidences, several categories of which a person is commanded to raise his hands while supplicating are explained. Among them is the istisqa’ supplication (asking for rain from Allah SWT). This is according to a hadith narrated by Anas bin Malik RA, where he said:

The Messenger of Allah (ﷺ) was not accustomed to raise his hands in any supplication he made except when praying for rain. (He would then raise [his hands] high enough) that the whiteness of his armpits became visible.

Imam Ibn Battal when commenting on the hadith cited the following opinion: Raising one’s hands for istisqa’ supplication is mustahab (encouraged). The reason is it showcases a person’s humbleness and humility, bowing in front of Allah SWT. Refer Syarah Sahih al-Bukhari, Ibn Battal (3/21).

Second: Supplication Where It Is Not Encouraged to Raise One’s Hands

Third: Supplication Where It Is Neither Encouraged nor Prohibited to Raise One’s Hands

Nevertheless, all these categories of du’a is basically encouraged to be recited with raised hands. The reason is raising one’s hands showcases the humbleness and humility of a person soul in front of Allah SWT. It is also included as one of the reasons a person’s supplication is accepted and granted by Allah SWT.

To conclude, after analysing the above evidences and arguments, we would like to state that it is sunnah for a person to raise his hands when he is supplicating before sleeping to showcase his humbleness and humility in front of Allah SWT. Although, if a person just recites the du’a without raising his hands, it is not an issue.