AL-KAFI #1617: THE STATUS OF PROPERTY OR GOODS BOUGHT THROUGH CONVENTIONAL LOAN 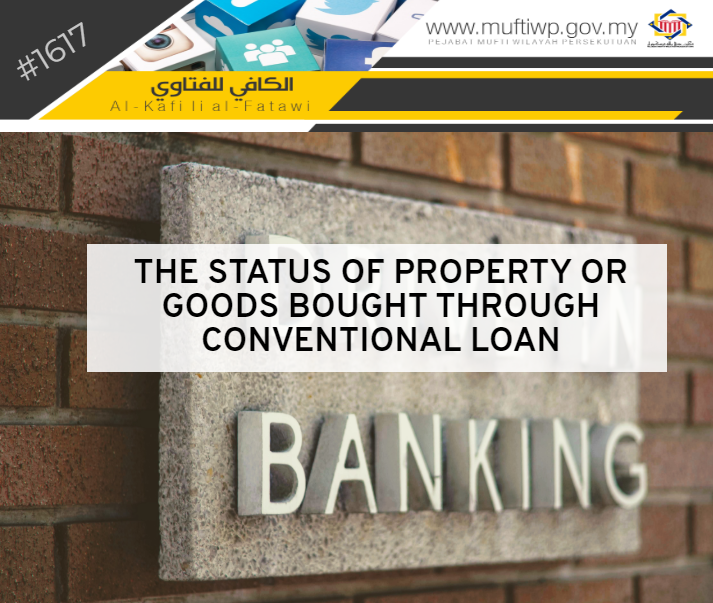 Assalamualaikum. What is the ruling of using property bought through loan or financing that involves usury? Such as conventional loans to buy a car or credit card installment which has interest? Is it permissible for us to use them? Thank you.

The basis that everyone should hold onto is that usury is stated by Imam Zahabi (died 748 H) is included in the category of major sins. Allah SWT warns those who are directly or indirectly involved with it, stating that blessings are removed from every transaction involving usury. (See al-Kabair, 1/63)

The most frightening is when Allah SWT declare war upon those who practice usury in their business transaction, Allah SWT states:

“And if you do not, then be informed of a war [against you] from Allah and His Messenger. But if you repent, you may have your principal - [thus] you do no wrong, nor are you wronged.”

The Prophet PBUH also sternly warns against usury stating the warning from Allah SWT for those who are involved in usury. Abdullah Ibn Mas’ud RA narrated that the Prophet PBUH said:

The next question is regarding property in certain usury transaction, this has been answered by usul fiqh scholars indirectly. When we analyse the books of usul fiqh, scholars have stated that a prohibition of something is divided into two types:

Something is originally haram due to the its own essence where it is harmful and bad which is inseparable.

The implication is that the trade of alcoholic beverages (intoxicants) between a buyer and a seller is invalid.

Something which is originally permissible but due to external factors becomes haram.

The implication from this is, for example, if a person sells a coconut shake during the second adhan of Friday prayer, both the buyer and seller are sinful but the trade is valid and it is permissible for the buyer to drink the shake.

The difference between these categories of haram results in great implications in numerous fiqh issues that happen. The reason is the first category denies and invalidates the trade while the second type the property traded is permissible to be benefitted from. However, the parties involved are sinful for committing such a transaction. Citing the words of usul fiqh scholars regarding the transaction of haram lighairihi: Valid but sinful. (See Muʿjam Usūl al-Fiqh, pg. 105)

Thus, considering the above divisions, we would like to state that conventional loan that involves usury is haram. However, the sin of its prohibition is due to the usury money involved, while the property or goods bought using usury money is permissible to be used and owned by the debtor. This is also the opinion of Palestine Fatwa Committee with the cooperation of Kuliah Shariah, Najah National University [1].

At the same time, it is wajib for the debtor to repent to Allah SWT for his transgression through istighfar, increasing his worships and most importantly determination to never repeat the sin again. As a suggestion, the debtor could try to pay off his debt as quickly as possible if he is able to get a rebate from the bank to decrease the usury involved. All of this is proof of his determination to repent and escape the usury.