AL-KAFI #1618: THE RULING OF A PERSON IN THE STATE OF JANABAH TO SLEEP BEFORE TAKING THE OBLIGATORY BATH 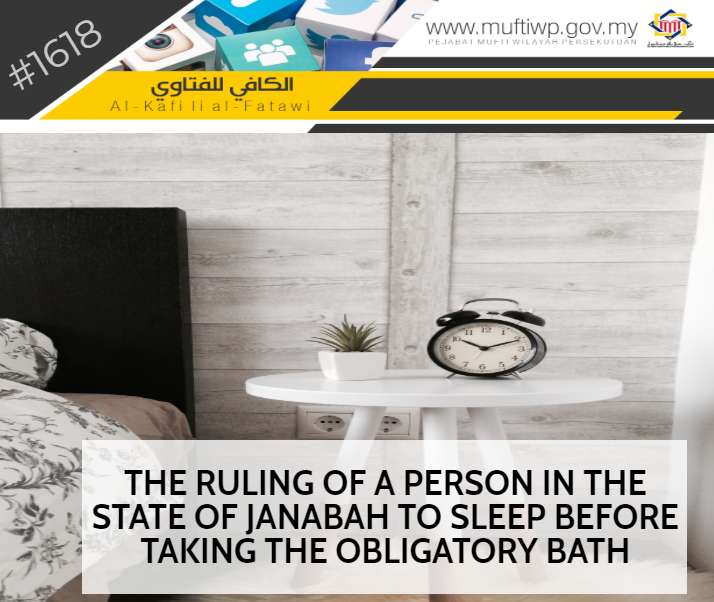 Assalamualaikum, if a guy is in the state of janabah, is it permissible for him to sleep in this state? Or should he first take his obligatory bath?

Answering this issue, a person is considered to be in the state of janabah after he experiences two situations. First, he ejaculated after having a dream and others. Second, after intercourse between husband and wife even if he didn’t ejaculate.

Coming back to the presented question, we will share the following narrations. Among them is a hadith narrated by Abu Salamah RA where he asked A’isyah R.Anha:

"Did the Prophet (ﷺ) use to sleep while he was Junub?" She replied, "Yes, but he used to perform ablution (before going to bed).”

Imam al-Hafiz Ibn Rajab al-Hanbali in his commentary on this hadith stated: “This hadith proves the permissibility of delaying the obligatory bath without any necessity. However, if he wants to sleep, it is sunnah for him to first perform the ablution.” Refer Fath al-Bari, Ibn Rajab (1/349).

Likewise, it is also stated in a hadith narrated by Abdullah Ibn Umar RA, he said:

`Umar asked the Prophet (ﷺ) "Can anyone of us sleep while he is Junub?" He replied, "Yes, if he performs ablution."

While in another narration from Ibn Umar RA, he said: Umar once told the Prophet PBUH that he experiences junub at night time. Then, the Messenger PBUH said:

"Do wudu and wash your penis, and then sleep."

Although according to al-Syafi’iyyah and other scholars, the commandment in the above narration does not refer to its wajib ruling, consequently, it refers to the mustahab ruling which means it is sunnah. The reason is there are other narrations which prove the ruling is only mustahab.

Syeikh al-Mahamili al-Syafi’e when commenting the situations when it is sunnah for a person to perform ablution, among them is:

And perform ablution when you are about to sleep for those who are in janabah.

Lastly, we pray to Allah SWT to give us the correct understanding in practising religion. Amin.