AL-KAFI #1621: DOES A HUSBAND HAS A RIGHT TO RECEIVE THE HOUSE LEFT AS A PART OF THE INHERITANCE LEFT BY HIS WIFE EVEN WHEN IT WAS BOUGHT BEFORE THEY WERE MARRIED? 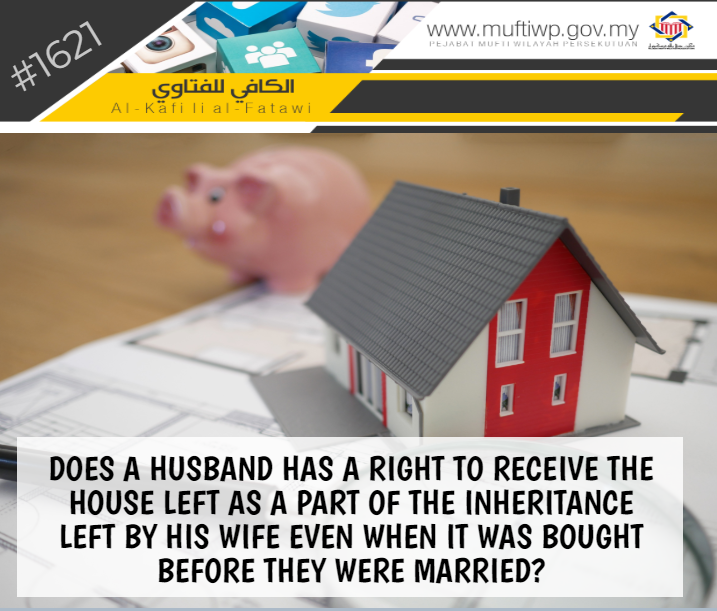 Assalamualaikum. If a wife bought a house before she was married, then she dies. Does the husband reserve the right on the house; to receive it as part of the inheritance she left through faraid, even though he never paid for the house instalment payments nor did he even know about its existence until after his wife died?

When a person passes away, all of his property will be classified as an inheritance. This property or inheritance left is anything of value which the person owns during his life of which it continues after his death. According to the stipulations set by Baitulmal MAIWP[1], these properties include:

According to the above division of properties, a house bought by the wife before she marries and continues to be hers after her marriage is categorized as inheritance and it is wajib to be divided to her heirs. Please refer to our article Al-Kafi: Is It Permissible for Step Children to Receive Inheritance?

Whereas, for a house bought by a wife, it does not become the husband’s house completely. Consequently, it is divided according to syarak. For example, if we assume that all the heirs are the husband, a son, two daughters and her parents are still alive.

Then, the husband and parents would first get their portions. Afterwards, the total of the remaining inheritance (RI) is given and divided among the son and daughters with the ratio of 2:1 for a son and a daughter.

The division is as the following:

If the deceased only have a house as her asset and let’s say that the current value of the house is RM 700,000. Then the husband will only receive 9/36 from the house which is approximately RM 175, 000. The rest is divided to the other heirs as stated in the above schedule.

The situation changes if, before her passing, the wife sold the house or changed the ownership of the house to another person. The effect from this is that it is no longer classified as inheritance and the heirs do not have any right to claim the property.

To conclude, the husband has the right on the house which is an asset of the deceased of just ¼ of it. The time the house is purchased regardless of whether it is before or after her marriage is irrelevant for it does not affect the eligibility of the husband to receive it as a part of her inheritance left except if the ownership of the house has changed.