AL-KAFI #1623: THE RULING OF RESTRICTING SOME OF A PERSON’S CHILD FROM RECEIVING HIS INHERITANCE 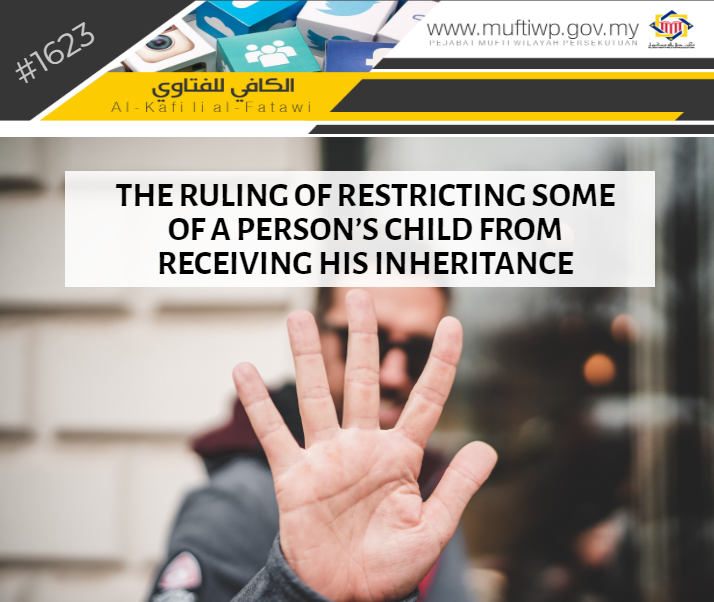 Assalamualaikum. This is my question, what is the ruling of a father who wrote a will saying that his inheritance is to be divided to some of his children and it is not to be given to one of his children? Is the exempted child no longer eligible to receive the inheritance? Hope for an explanation from you. Thank you.

We start with the statement of Allah SWT:

“Allah instructs you concerning your children: for the male, what is equal to the share of two females. But if there are [only] daughters, two or more, for them is two thirds of one's estate. And if there is only one, for her is half. And for one's parents, to each one of them is a sixth of his estate if he left children. But if he had no children and the parents [alone] inherit from him, then for his mother is one third. And if he had brothers [or sisters], for his mother is a sixth, after any bequest he [may have] made or debt. Your parents or your children - you know not which of them are nearest to you in benefit. [These shares are] an obligation [imposed] by Allah. Indeed, Allah is ever Knowing and Wise.”

Both verses clearly state the sanctioning of inheritance of a person. When a person passed away, it is wajib for his property to be divided to his heirs in accordance with al-Quran and al-Sunnah. Thus, it is clear that division of inheritance is an obligation. This matter is written in Fiqh books in terms of the obligation of inheritance on the property of the deceased. Imam al-Nawawi said the last obligation for the inheritance of a deceased is for it to be divided to the rightful heirs. (See: al-Majmu’ Syarh al-Muhazzab; 16/53). Thus, whoever disobeys or denies it, then indeed, he has committed a great sin for he has disobeyed the commandment of Allah SWT. The reason is Allah SWT states in the next two verses, that it is the set commandments of the shariah of Allah SWT. Allah SWT states:

“These are the limits [set by] Allah,”

Imam al-Baghawi defined the word “hudud” in this verse is the commandment of inheritance. (See: Tafsir al-Baghawi; 2/180). Imam al-Baidhowi then said the meaning تلك here signals the previous rulings for the matter of orphans, will and inheritance. (See: Tafsir al-Baidhowi; 2/64). Thus, coming back to the above question, the act of a father denying the right of a child from receiving inheritance and it is considered as a great sin. Moreover, this is strengthened with the statement of Allah SWT:

“And whoever disobeys Allah and His Messenger and transgresses His limits - He will put him into the Fire to abide eternally therein, and he will have a humiliating punishment.”

Imam al-Qurtubi commented on this hadith saying that it means they are those who when the division of inheritance came, they denied or disobeyed with the stated division of inheritance stated by Allah SWT. (See: Tafsir al-Qurtubi; 5/82). Imam Ibn Kathir commented the same on this verse. (See: Tafsir Ibn Kathir; 2/232). The same is stated by Syeikh al-Maraghi in his book Tafsir al-Maraghi (4/202-203).

Therefore, whoever prevents or denies the right of inheritance of an heir such as his child, or giving less from what is rightful for him or increasing from what is his right or even including someone who is not the rightful heir, then he is considered as a great sin.

Moreover, the basis for inheritance is there is no such inheritance from a will for the rightful heirs for they have their own right of inheritance. This is in accordance with the statement of the Prophet PBUH:

“Allah has appointed for everyone who has a right what is due to him, and no bequest must be made to an heir.”

Thus, according to the above hadith, it is clear that no bequest (in the form of a will) is impermissible, however, there are several situations where this is exempted. This matter has been discussed in-depth in our previous article titled AL-KAFI #1225: THE RULING OF MAKING A BEQUEST FOR ONE’S CHILD.

As a conclusion, the ruling of a father denying the rights of faraid of one of his heirs especially when it is his own child is haram and considered as a great sin. We advise people to be fair and obey the commandments of Allah SWT and His Messenger in the matters of the division of inheritance. May Allah SWT give us all the right understanding in religion with sincerity and strengthened our faith as well as bless our every deed.