AL-KAFI #1626: IS IT TRUE THAT ANGELS WILL NOT ENTER THE HOUSE OF A PERSON IN MAJOR HADAS (MAJOR IMPURE STATE)? 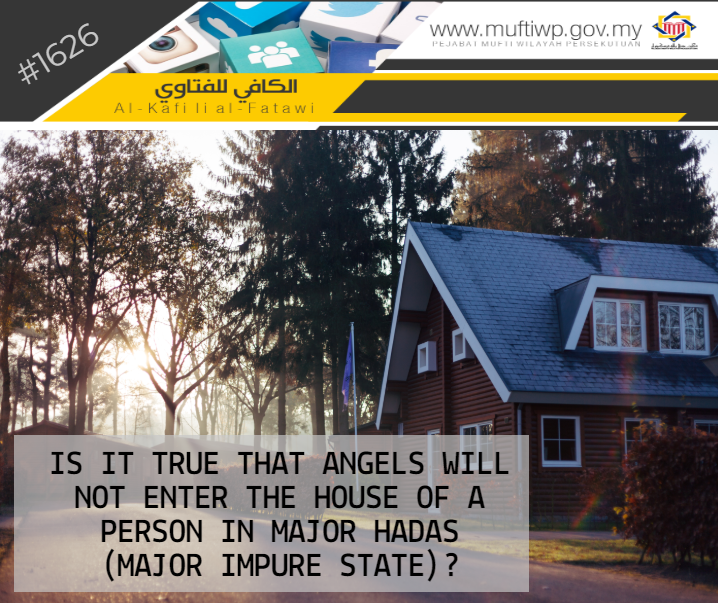 Assalamualaikum SS Datuk Mufti, is it true that angels will not enter the house of a person who is in the state of major impurity?

Junub (an Arabic word which explains the state of major impurity) originates from the word janabah which means far away. The term is used by jurists, Imam al-Nawawi defined junub as: The term janabah according to syarak refers to those who ejaculate and those who had intercourse. It is named as junub for it distances a person from prayer and recitation of the Quran. Refer Al-Majmu’ Syarah Al-Muhazzab, Al-Nawawi (2/159).

Referring to the question presented, we would like to state that there is syarak evidence that explains this. It is according to a hadith from Ali bin Abi Thalib RA, he said the Prophet PBUH said:

"The angels do not enter a house in which there is a picture, a dog or a person who is Junub."

Hadith scholars when commenting on this hadith said that the angels meant in the hadith are angels of blessings and not the al-hafazhah (angels that protects and records the deeds of humans) and also the angel of death.

Imam al-Khattabi said: The angels meant here are those that bring blessings and care and not the al-hafazhah for indeed they are never separated from the person they are responsible for, whether the person is in junub or otherwise. Refer Ma’alim Al-Sunan, Al-Khattabi (1/75).

Syeikh Badruddin al-‘Aini when commenting on the above hadith said: The meaning of junub here is an individual who is negligent in the issue of obligatory bath that he would miss his prayer or prayers because he hasn’t perform the obligatory bath. It does not mean a person who delays his obligatory bath but has the intention to perform it. Or the hadith may indicate those who only perform incomplete purification. The reason is a person who performs ablution would have partly purified himself. Refer Umdah Al-Qari, Badruddin Al-‘Aini (3/242)

Thus, the meaning of junub in the above hadith should not be understood as absolute. However, it is specific for those who are negligent in their obligatory bath which leads to a person missing his prayers. The reason is if the hadith is a general hadith then it contradicts the action of the Prophet PBUH narrated by Ummu al-Mu’minin A’isyah R.Anha, she said:

“The Messenger of Allah (ﷺ) would sleep while he was sexually defiled without touching water.”

Thus, this hadith clearly shows that the Prophet PBUH himself slept while he was still in junub, where he did not first perform his obligatory bath before sleeping.

To conclude, after we analyse the above narrations and arguments, we would like to state that in interacting with both the narrations, the first thing that should be considered is to harmonize both of them. In terms of whose home the angels will not enter are the homes of those who neglect their obligatory baths and miss their prayers because of it. As for those who delay their obligatory prayers but have the intention to perform it when the time for prayer begins, then they are not included in the warning of the hadith.

Lastly, we pray to Allah SWT for the correct understanding in this religion. Amin.