AL-KAFI #1630: IS INTERCOURSE PERMISSIBLE BETWEEN HUSBAND AND WIFE WHEN THEIR DIVORCE HAS NOT BEEN FINALIZED BY THE COURT? 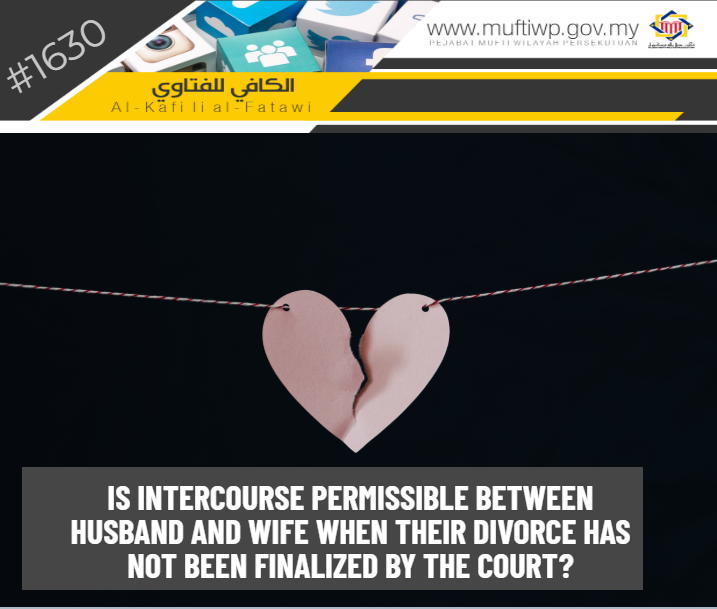 Assalamualaikum. I am in the process of receiving the finalization of divorce by the court after divorcing my wife. However, in the name of Allah, the judge/receptionist in the Shari’ah Court of Selangor said that I am still permitted to have intercourse with my ex-wife when the divorce has yet been finalized by the court. Does the shariah court has greater authority than the laws of Allah SWT? And if I have intercourse, isn’t it considered as zina (adultery) by Allah?

Waalaikumussalam w.b.t. May Allah ease both of your marital issues.

When a divorce takes place, each spouse should know the rights and responsibilities as well as the do’s and don’ts so that one may not commit actions which contradict the syarak. Among the most important thing which is wajib to be known is pertaining to the ruling of talaq and ruju’ as well as its procedures according to the set guidelines from the Shari’ah Court.

In a valid marriage, a husband has the right to divorce his wife three times. The first and second divorce can still undergo ruju’ (resumption of conjugal relationship) as long as it is still during the period of ‘iddah. If the ‘iddah period expires, a husband is prohibited to ruju’ his wife unless through a new aqad and mahr like marrying for the first time.

In term of Shari’a laws, right after talaq is pronounced, one talaq automatically happens whether the pronouncement was made inside or outside of court. Its implication is it is prohibited for the ex-husband to live together with the divorced wife in the same house together, especially having intercourse, whether talaq raj’I [1] or talaq bain[2]. This is because a divorced wife is an ajnabi woman to the ex-husband. This is the final opinion mentioned by Imam al-Nawawi Rahimahullah in raudhah al-ṭālibīn (8/418).

Confusion arises when there is a claim which says that talaq only takes place when it is pronounced before the judge in the court, and not outside of it. In answering the above confusion, this question may be answered through the division of wajib.

For example, a husband divorces his wife through talaq without having any eyewitness. The wife intends to bring this issue to the court to claim her rights while the husband refused to profess on his talaq which causes the judge to rule that the woman is still a valid wife due to the factor of not having any eyewitness or proof, but, the husband cannot deny the fact that he divorced his wife.

The judge rules based on what is manifested only, while Allah is the All-Knowing of every single thing. According to syara’, talaq still takes place and it is wajib for the husband to abide by all commandments and prohibitions related to talaq and ruju’ even if the judge ruled otherwise.

The example is the above question, in which the laws oblige each divorce to be registered and decreed by the court. If a divorce has not been finalized by the court, the implication is both of them are still considered as husband and wife before the Court.

However, one should remember that the status of husband and wife is only valid before the laws, and not before syara’. This happens because syara’ has stated that talaq still happens when its conditions are fulfilled whether the Court already decreed on it or not.

The division of wajib as above shows that divorce out of Court is still valid in Islam even if the Court has yet to finalize it. However, it is advised to all husband and wife to register any form of dissolution of marriage and ruju’ that will take place inside of the Shari’a Court. At the same time, abide by the rulings related to talaq and ruju’. This application is the best and perfect.

According to Islamic Family Laws Acts of every state, talaq pronouncement should be done inside the court as what is mentioned in Section 47 of Islamic Family Laws Act (Federal Territories) 1984 for the purpose of record and to ease the settlement of a claim when a problem arises. If talaq pronouncement is done outside of the court, husband or wife should immediately register it to the Shari’a Court within 7 days to avoid being fined not exceeding a thousand-ringgit Malaysia or imprisonment not exceeding six months or both.

This Act is enacted for the benefit of both parties. Hiding talaq pronouncement made outside of the court will make it so that there are no records of the talaq in Religious Council and make it harder for those involved to recall what happened if the same thing repeats in the future. While if the pronouncement occurs several times afterwards, it may cause three talaq to be made unintentionally and of which the husband and wife cannot remarry again.

It will be even harder if both husband wife had intercourse while the process of ruju’ have not yet been made in the period of ‘iddah that it affects the nasab for the child born. If this happens, it is wajib for both husband and wife to repent to Allah because they have committed adultery. We already explain this in detail in the article Irsyad al-Fatwa Series 229b: Is It Permissible for an Ex-Husband to Live Together with His Wife During ‘Iddah?

Based on the above explanation, it can be concluded that it is haram for a husband to have intercourse with his wife during the proses of divorce that are waiting for the decree and finalization from the court. The power of Shari’a court as judiciary institution in administering and protecting existing Shari’a laws to protect the betterment and benefit of the society. Intercourse happened before the process of ruju’ is considered as adultery. It is wajib for the husband and wife to repent to Allah for the wrongdoing made. Lastly, when a husband utters confusing words, he should refer to the nearest Shari’a Court for further explanation. Choosing to be silent and ignore it may cause harm in the future.

[1] Talaq raj’i: A talaq which can undergo ruju’ with the condition it happened for the first and second time as well as still being within the ‘iddah period.

[2] Talaq ba’in: Talaq which cannot undergo ruju’ due to the expiry of ‘iddah period (for one and two talaq) or talaq that takes place thrice.