AL-KAFI #1631: THE RULING OF PUTTING A BELL ON FARM ANIMALS 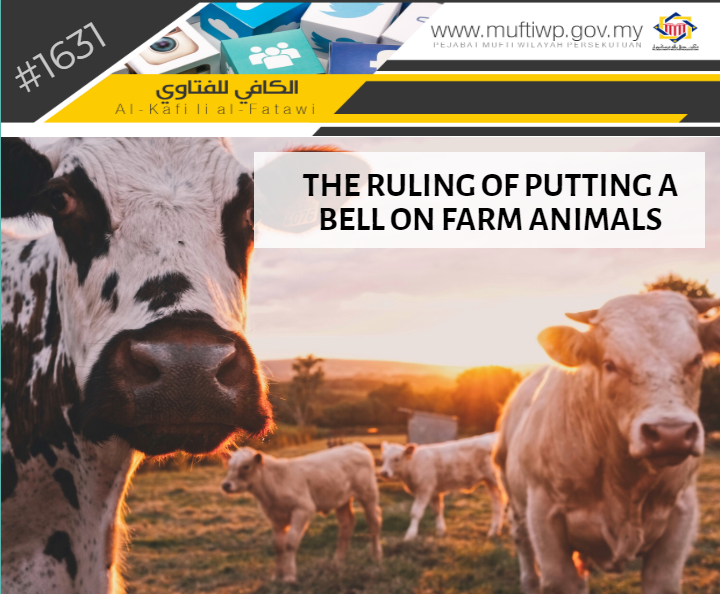 Assalamualaikum SS Mufti, I’m a farmer who rears cows. As to prevent my cows from going missing, I put on a bell around its neck. Some people told me that this is impermissible, is this true? Hope for an explanation from you. Thank you.

According to the above question presented, we start with a hadith narrated by Abu Bashir al-Ansari who said:

He was in the company of Allah's Messenger (ﷺ) on some of his journeys. (The sub-narrator `Abdullah adds, "I think that Abu Bashir also said, 'And the people were at their sleeping places.") Allah's Apostle sent a messenger ordering: "There shall not remain any necklace of string or any other kind of necklace round the necks of camels except it is cut off."

Imam al-Bukhari placed this hadith under the chapter “Chapter which explains the matter of bells and others on the necks of camels.” Imam Ibnu Hajar stated in his syarah that it is makruh (undesirable) to put a necklace on the necks of camels for there is specific evidence which restricts it. Furthermore, Imam Ibnu Hajar cited the opinion of Abi Ubaidah which states the accurate meaning from the hadith is that the restriction is because it is to prevent the animal from choking because of the necklace. The same is stated by al-Khattabi who said they put the bell on the necks of the animal and because of this Imam al-Bukhari placed the hadith under the title related to bell. (See Fathu al-Bari li Ibnu Hajar, 6/142)

Imam Badruddin al-‘Aini in his syarah said that according to Imam al-Bukhari normally the bell is tied on the necks of animals with a necklace, thus when it is restricted to put on a necklace on camels, then it includes putting on bells on animals. (See Umdah al-Qari Syarh Sahih al-Bukhari, 14/252)

In another hadith regarding the restriction of putting on bells for the angels is not with him, this is as narrated by Abu Hurairah RA, where the Prophet PBUH said:

“Angels do not accompany the travellers who have with them a dog and a bell.”

Imam Badruddin al-‘Aini cited the opinion of Imam al-Nawawi and others who said that the majority of scholars are of the opinion that it is makruh tanzih while others state that it is makruh tahrim. Furthermore, according to some opinion, it is restricted from putting on bell on animal if there is no need or necessity and it is permissible if there is a need or necessity for it. (See Umdah al-Qari syarh Sohih al-Bukhari, 14/253; Syarh al-Nawawi ala Muslim, 14/95)

Besides, Imam Muslim cited the opinion of Abu Ubaidah in his syarah which states that those who put on a necklace on their animal as protection from ­al-Ain disease, this is why the Prophet PBUH instructed it to be cut. (See Syarah al-Nawawi ala Muslim, 14/96)

According to the above question and evidences presented, we would like to conclude that it is makruh to put a bell on farm animals if there is no need for it and it is permissible if there is a necessity such as if one feared that the animals would be stolen or others.

However, it is haram to put bells on animals if it is done with the belief that it would protect the animals from bad omen or diseases. The reason is the act contradicts with the aqidah taught by the Prophet PBUH.

May Allah SWT give us the sahih understanding in His religion and guide us to practise His commandments the best we could.