AL-KAFI #1632: IS IT PERMISSIBLE TO DIVIDE THE DEBT OF A DECEASED ACCORDING TO THE FARAID SYSTEM? 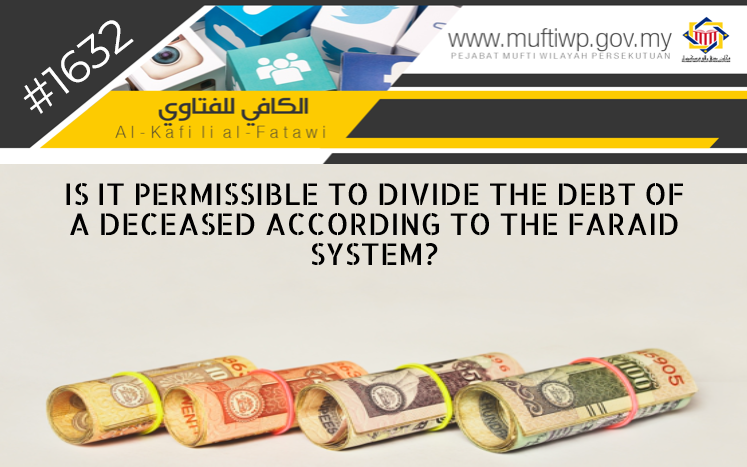 Assalamualaikum SS Datuk Mufti, I want to ask, is there a faraid system for debt? Faraid for inheritance is what we usually hear about, but what about if a deceased did not leave any inheritance but just leave a lot of debt, is there such a thing as division of faraid for debt? Hope for an explanation. Thank you.

Debt or loans is not something that is neither liked nor encouraged in Islam. This is clear that the Prophet PBUH taught us a supplication to ask for protection from debt. In a hadith narrated by Saidatina ‘Aisyah R.Anha, where she said the Prophet PBUH supplicated before salam with the following supplication:

Imam al-Hafiz Ibn Hajar said, “The meaning for the word maghram is dain which means debt. It is said that the meaning of al-Maghram is whatever is owed, regardless whether it is permissible or not, then the debtor is unable to pay it back.” (See Fath al-Bari, 2/371)

Answering the above question, if a person who has a debt dies, then it is obligatory for the debt to be settled using the property that the deceased left. The reason is the main matter that the heirs of a deceased should do is to settle the debt left by the deceased to free the deceased from the debt. In a hadith narrated by Abu Hurairah RA, the Prophet PBUH said:

“A believer‘s soul remains suspended according to his debt until it is settled or paid off on his behalf."

Sunan al-Tirmizi (1079). Imam al-Tirmizi evaluate the sanad of the hadith as hasan.

Nevertheless, if the deceased did not leave any property or the property that he left is insufficient to settle his debt, then it is impermissible for the heirs to settle the debt of the deceased. This is as stated by Allah SWT:

“And every soul earns not [blame] except against itself,”

However, if the heirs decide to help in settling the debt left by the deceased, then it is included under the chapter of ihsan for the deceased and would surely be rewarded by Allah SWT.

Debt is a responsibility burden that should be settled by the debtor. Every Muslim should have the determination to settle his debt. This determination should be accompanied with efforts to settle the debt. In a hadith narrated by Abu Hurairah RA, the Prophet PBUH said:

"Whoever takes the money of the people with the intention of repaying it, Allah will repay it on his behalf, and whoever takes it in order to spoil it, then Allah will spoil him."

The same is also stated in another hadith from Abu Hurairah RA, the Prophet PBUH said:

“…for best of you or best amongst you are those who are best in paying off debt.”

Hopefully, this explanation will give us all clear understanding in living in accordance to the true shariah of Islam. Amin.