AL-KAFI #1640: THE COMPANIONS WHOSE NAMES ARE MENTIONED IN THE QURAN 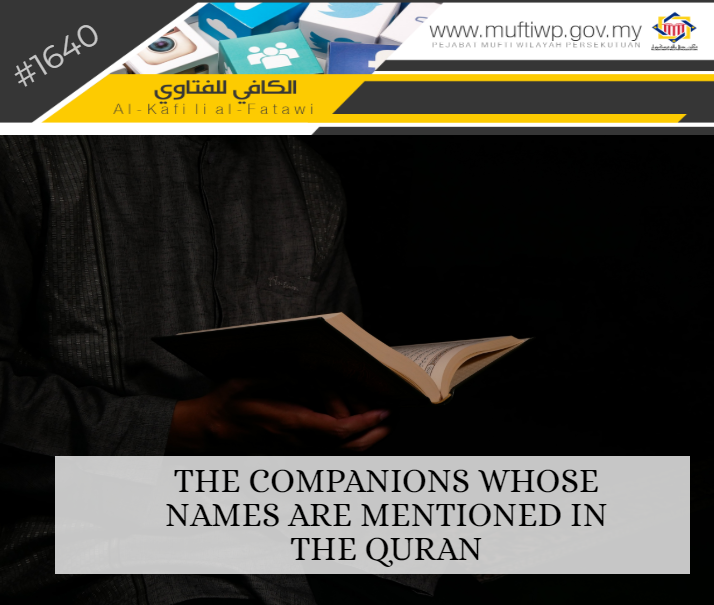 Assalamualaikum Dato’. I have a question. Who are the companions of the Prophet PBUH that are mentioned in the Quran? Can you please explain a bit about them?

And [remember, O Muhammad], when you said to the one on whom Allah bestowed favor and you bestowed favor, "Keep your wife and fear Allah," while you concealed within yourself that which Allah is to disclose. And you feared the people, while Allah has more right that you fear Him. So when Zayd had no longer any need for her, We married her to you in order that there not be upon the believers any discomfort concerning the wives of their adopted sons when they no longer have need of them. And ever is the command of Allah accomplished.

This surah tells about the companion of the Prophet PBUH who is also the adopted child of him which is Zaid bin Harithah and his wife Zainab binti Jahsy. Syeikh al-Maraghi stated in his tafsir, this verse tells about the marriage of Zaid bin Harithah and Zainab binti Jahsy. Zainab was proposed by the Prophet PBUH on behalf of Zaid. This verse also stated their divorce story, along with the story of her marriage with the Prophet PBUH later on. It was to eliminate the doing and Jahili custom which forbids marrying a divorcee of one’s adopted child. (See Tafsir al-Maraghi, 22/11)

Dr Wahbah al-Zuhaily states in his book that the athar narrated by Imam Muslim, Ahmad and al-Nasai’e from Sayyidina Anas RA states, after the iddah of Zainab binti Jahsy ends, the Prophet PBUH commanded Zaid to meet Zainab to tell the Prophet PBUH’s intention to marry her. Then, Zainab said I will not decide on anything unless after I asked for guidance from Allah SWT. Then, Allah SWT revealed this verse. (See al-Tafsir al-Munir li Zuhaili, 22/27)

Imam al-Zahabi stated in his book that his full name is Zaid bin Harithah Syarahil al-Kalbi. He is so loved by the Prophet PBUH and he is among the first to embrace Islam. He passed away at the age of 55 years old, while in another narration, at the age 50 years old or around that.

Zaid bin Harithah is the adopted child of the Prophet PBUH and he was even named as Zaid ibn the prophet PBUH at first until there is a prohibition from Allah to name one’s child after his adopted father as there is a protection of lineage and progeny in this religion. Then, Allah SWT reveals a verse:

“Muhammad is not the father of [any] one of your men (due to being an adopted father of someone among you).”

The same for a saying of Allah SWT:

And he has not made your adopted sons your [true] sons

Abu Ishaq al-Sabi’e stated Zaid bin Harithah was kidnapped by horse-riding bandits from Tihamah to be sold out. He was then purchased by Sayyidatina Khadijah RA to be given to the Prophet PBUH. It is narrated that his price is 700 dinars.

Coming back to the question asked as well as the explanation given, it is clear that the Companion whose name is mentioned in the Quran is Zaid bin Harithah RA. His name is mentioned in verse number 37 of Surah al-Ahzab which narrates about the marriage of Zaid RA with his wife, Zainab binti Jahsy RAnha.

Besides, in the verse, it is also stated that it is permissible to marry a divorcee of one’s adopted child as well as denying the Jahili custom which forbids marriage between these two individuals.

May Allah SWT give us the correct understanding in His religion as well as taufiq and hidayah to practice His Shari’ah accordingly.