AL-KAFI #1641: THE ISSUE OF PERFORMING THE 8 RAKAAT DHUHA PRAYER SEPARATELY 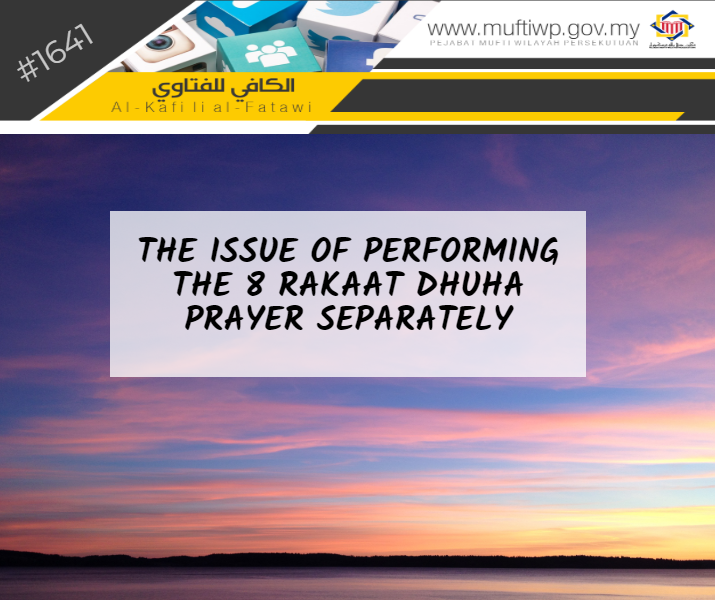 Assalamualaikum, if I want to perform the dhuha prayer for 8 rakaat, is it permissible to be performed consecutively or it can be performed separately as long as it is performed in the time for the prayer?

Dhuha prayer is one of the nafilah (sunnah) prayer which is encouraged. There are numerous evidences that state the advantages and benefits of this prayer. Among them us stated by Abu Hurairah RA, where he said:

“My friend (the Holy Prophet, may peace be upon him) has instructed me to do three things: Three fasts during every month, two rak'ahs of the forenoon prayer, and observing Witr prayer before going to bed.”

The above hadith clearly shows that dhuha prayer is encouraged by the Prophet PBUH. The two rakaat stated in the hadith explains the simplest form of dhuha prayer. However, it is not limited to only two rakaat, but the jurists from madhhab al-Syafie explained that the prioritized number of rakaat for dhuha prayer is 8 and the maximum is 12 rakaat as stated by Imam al-Nawawi.

We would also like to share the statement of Imam al-Nawawi who said: Indeed, the Prophet PBUH perform the dhuha prayer sometimes and leave it at other times, fearing that people would think that it is fardhu. Refer Al-Majmu’ Syarah Al-Muhazzab, Al-Nawawi (4/37).

Coming back to the question presented, when we state that the number of rakaat prioritized is 8 rakaat, this is based on a hadith narrated by Ummu Hani’ bin Abi Thalib R.Anha, he said:

The Messenger of Allah (ﷺ) prayed on the day of the Conquest (of Mecca) eight rak'ahs saluting after every two rak'ahs.

Imam al-Nawawi said: Our colleague and majority of scholars used the above hadith to state the istihbab (encouragement) to perform dhuha prayer of eight rakaat. Refer Syarah Al-Nawawi ‘ala Muslim (5/233).

However, the question arises is that is it supposed to be performed consecutively which means through tatabu’ التتابع? Hence, we state from the literal meaning of the hadith shows that the Prophet PBUH performed it continuously separated by salam every two rakaat. Although, the scholars explained that tatabu’ is not a condition to perform dhuha prayer and it can be performed as long as the time for dhuha prayer has not ended.

To conclude, after we have analysed the above evidences and discussions, we would like to state that performing eight rakaat of dhuha prayer in separate times as long as the time for prayer has not ended is permissible. However, this is considered as khilaf al-awla (a major contradiction) from the guidance of the Prophet PBUH taken from several narrations that depict how the Prophet PBUH performed the dhuha prayer consecutively where every two rakaat is not separated for a long duration of time.

Lastly, we pray to Allah SWT so that we are given the correct understanding in religion. Amin.