AL-KAFI #1642: IS IT NECESSARY TO WASH ONE'S PRIVATE PARTS FROM SWEAT FEARING THAT IT IS UNCLEAN? 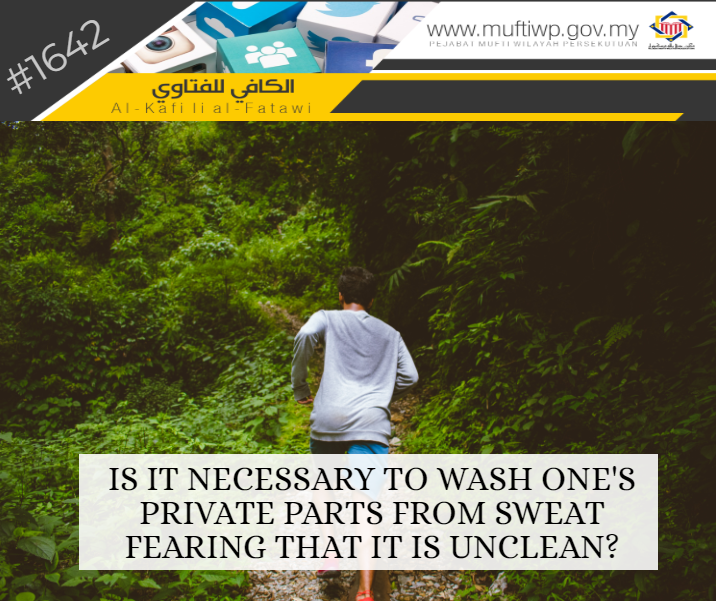 Assalamualaikum. I want to ask whether it is necessary to wash our private parts before performing our ablution when we know they are clean from najis but we fear that they might be unclean because of sweat?

The act of cleaning ourselves is a form of worship in Islam. The reason is one of the characteristics of worship is when Allah SWT loves and likes the act. In the Quran, Allah SWT explains that He loves those who clean themselves through the verse:

Coming back to the question presented, we would like to state that if a person is in a pure state (free from hadas), then he will remain in this state until something that invalidates his ablution happens. An Islamic legal maxim states:

“The original ruling of something remains according to its original condition.”

Thus, as long as a person does not do anything that will invalidate his ablution such as lose his consciousness, has physical contact with non-mahram, something is excreted from his privates and others that invalidate ablution, then he remains in a pure state.

As for the issue of sweating around a person’s privates, then we state that scholars have agreed that sweat is not included as najis and this includes sweat from all body parts such as around the armpits and others. Imam al-Syafie said:

The same for if a person sweats and his sweat drips into water, then it does not turn the water into impure water. The reason is the sweat of humans and animals are not najis. Regardless whether it (the sweat) is from under his arms or other parts. Refer Al-Umm, Imam Al-Syafi’e (1/19).

However, there is an opinion stated by Imam al-Nawawi which states: If a person performs istinja’ (purifying/cleaning oneself after urination or defecation) using rocks, then he sweats and the sweat drips and passes the part he just cleansed, then it is wajib to wash the dripping sweat. If it does not pass the part he had just cleansed, then it is divided into two opinions. First, it is wajib to wash it and the sahih opinion states that it is not wajib to be washed because it is hard to be avoided (umum balwa). Refer Al-Majmu’ Syarah Al-Muhazzab, Al-Nawawi (2/129).

The above opinion is exclusive for when istinja’ is performed using rocks. While if a person performs istinja’ using water to wash his privates until they are clean, then sweat around the privates is considered as clean and not najis.

To conclude, after analysing the above evidences and arguments, we would like to state that it is unnecessary to clean a person’s privates from sweat before performing the ablution. The reason is istinja’ is only necessary when najis is excreted while sweat is not considered as najis. This is further strengthened with a hadith narrated by Huzaifah Ibn al-Yaman RA, he said the Prophet PBUH said:

“The Muslim is not made impure (Najis).”

Thus, if the body of a Muslim is not najis, then his sweat is also not considered as najis. This is with the exception of matters which have been stated as najis by syarak. Wallahua’lam.

Lastly, we pray that Allah SWT would give us all the correct understanding in religion. Amin.