AL-KAFI #1643: OPENING A BUSINESS IN A PROHIBITED AREA OR WITHOUT PERMIT 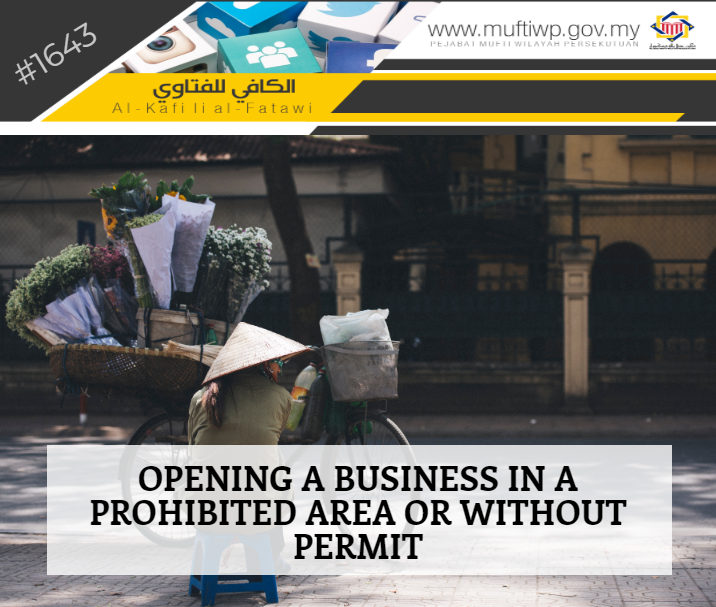 What is the ruling if I open a stall in areas prohibited by local authorities? Or if I open a business at a permissible place, but I do not apply for a permit? Then, is my income considered as halal or haram?

The original rule on trade and opening a business is referred back to the original rule in muamalah which is an interaction among humans, that is permissible until there is dalil which prohibits it.

It is He who made the earth tame for you - so walk among its slopes and eat of His provision - and to Him is the resurrection.

The original rule of something related to muamalat is its permissibility unless there is dalil that contradicts or prohibits it.

Whereas the hadith of Sai’d bin Zaid which narrates that the Prophet PBUH said:

"If anyone revives dead land, it belongs to him, and the unjust root has no right."

This hadith does not imply that a person is permissible to open his business in any location he thinks appropriate. Sheikh Khalil al-Saharanfuri when explaining on this hadith states that ‘a dead land’ in this hadith is understood by the fuqaha’ (jurists) as unclaimed land which is located outside of a particular state or land of no benefit to the state or village. The land that is being developed should first obtain the permission from the ruler, and this is the opinion of Imam Abu Hanifah, Qadhi Abu Yusuf, Imam Malik as stated by Imam al-Syaukani and Imam Mulla Ali al-Qari. (Refer Bazl al-Majhud fi Halli Alfaz Abi Dawud 10/318, Nail al-Autor 6/45 and Mirqat al-Mafatih Syarh Misykat al-Masobih 6/133)

The Context of A Modern Nation

In the context of current citizenship of a modern nation, there are some conditions set by the local authorities upon the sellers and hawkers, among them are:

These prohibitions are already included under the hadith of the Prophet PBUH which prohibits any form of damage and harm:

Harm or hardship is lifted the best possible way

Besides, the concept of taqyid al-mubah is also applied here, in which the ruler reserves the right to limit matters which are originally are permissible, but then are restricted due to maslahah. The Islamic legal maxim states:

Imam Ibn Hajar al-Haitami al-Shafi’e said: It is not wajib to obey the command of the ruler (al-hakim) which does not lead to the maslahah ‘ammah (public good). Hence, it is understood through mafhum mukhalafah (converse meaning) that obeying the command of a ruler which contains mashalah ‘ammah is wajib. (Refer Tuhfah al-Muhtaj 3/71)

So, here we emphasize that the income from an unlicensed business or that is opened in the prohibited area by the local authorities is still halal as long as the merchandise is halal, the contract of selling and buying is sahih and does not exhibit any lies or transgressions upon the buyers.

However, obeying the command of the ruler is wajib if it has maslahah, in which, the prohibition of selling in the area is most probably due to the safety measures. The same goes for other worldly laws.

In short, we state that disobeying the command of the government in terms of not applying for a license or opening a business in the prohibited location will not affect the income in term of its status, but it leads to sin in another aspect, like a safety threat, injustice towards other sellers who applied for license and etc.