AL-KAFI #1645: PASSING PERFUME TO OTHERS AFTER THE IQAMAH 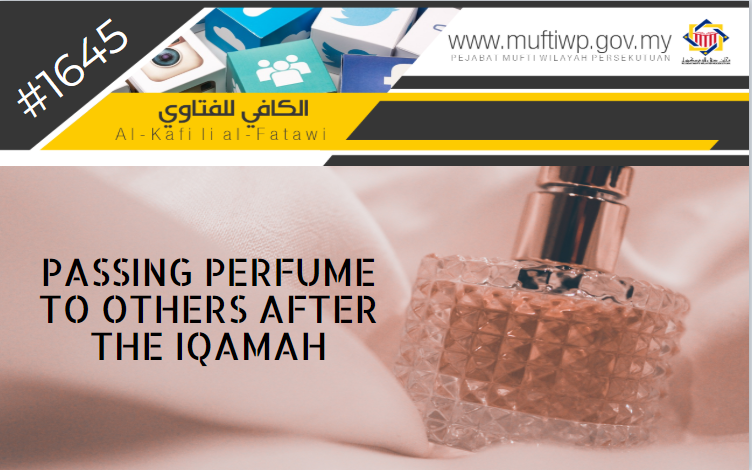 Assalamualaikum. I have a question. In a surau in my residential area, there is a person who loves to pass around perfume after the iqamah was called. He would walk to every saf to pass the perfume for others to put it on. This disturbed me and some other people in the congregation for it is the time we are trying to focus to begin our prayers. Is it something that is permissible to do after the iqamah is called? Sometimes I don’t want to hurt his feelings and I would just accept his offer of the perfume. Although when it comes to advising him, I don’t know how to do it. Hope for an explanation from you. Thank you.

It is in the nature of a Muslim to hasten in performing the commandments of Allah SWT. Allah SWT states:

And hasten to forgiveness from your Lord and a garden as wide as the heavens and earth, prepared for the righteous.”

Al-Hafiz Ibnu Kathir said the above verse is an encouragement for us all to hasten in fulfilling the commandments and instructions of Allah SWT where its purpose is to get closer to Him. (Refer Al-Tafsir Al-‘Azim, 1/496)

Thus, every commandment of Allah in matters of worship such as prayer should not be delayed or worse neglected.

Among the sunnah that should not be left before performing prayer is to call out the iqamah. Iqamah is a specific words and dhikr which are called out informing that the prayer is about to begin. It is one of the fardhu kifayah that is impermissible to be neglected. Al-Khatib al-Syarbini said that iqamah is an eminence and it is impermissible to be left. Leaving out the call of iqamah is considered as a negligence and considering the eminence of Islam lightly. (Refer Mughni Al-Muhtaj Ila Ma’rifah Ma’ani Alfaz Al-Minhaj, 1/134)

It is sunnah the same as the ruling for the adhan. It also has its own sunnah and condition just like the adhan. However, iqamah is different from the adhan in several matters:

Imam al-Nawawi stated that the wisdom from the calling both the adhan and iqamah is to raise and honour the name of Allah, His Messenger and acknowledging the success of the performance of every prayer. Its purpose is to cultivate the virtues in each Muslim showcasing the eminences of Islam. (Refer Al-Majmu’ Syarh Al-Muhazzab, 3/81)

Coming back to the question presented, it is makruh for any action including passing out perfume and others after the iqamah is called out. This is based on a hadith narrated by Abu Hurairah RA. He said, the Prophet PBUH said:

“When the prayer commences, there is no prayer but the obligatory one.”

This hadith clearly explains that after the iqamah is called out, then it is impermissible to perform any prayer except the obligatory prayer at the time. Imam al-Nawawi explained the wisdom behind the restriction and it is so that a person could focus on the obligatory prayer that is about to be performed. Thus, right after imam perform the takbir, he should perform the takbir together. If he is busy performing other sunnah prayer when the iqamah has been called, it is feared that he would miss some of the perfection which should be present when performing the obligatory prayer. (Refer Al-Minhaj Syarh Sohih Muslim, 5/221). We have already discussed this issue specifically in Al-Kafi Li Al-Fatawi no 1554.[1]

Considering the hadith literally, if even sunnah prayer is restricted from being performed after the iqamah is called, surely, other acts such as unnecessary talk, playing on one’s handphone and others such as passing the perfume is also impermissible. The reason is this act would disturb others who are focusing before performing prayer. It could even distract the focus of others.