AL-KAFI #1656: IS IT TRUE THAT REWARDS AND SINS ARE GREATER IN THE HARAM MONTHS? 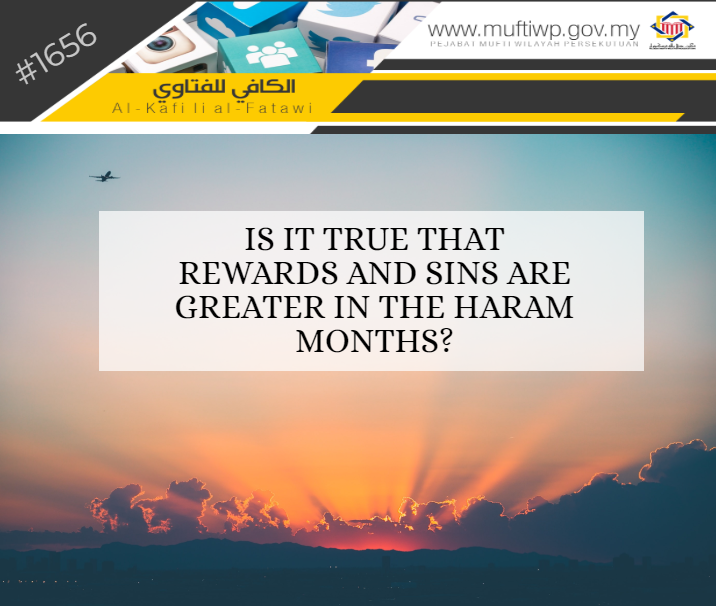 Assalamualaikum. Is it true that if one practices good deeds in the haram months, his reward will be greater compared to in other months? And how about sinning? Hope for an explanation.

Generally, Allah SWT has two main attributes; which are creating and afterwards choosing. This is clearly seen in Allah SWT’ statement:

And your Lord creates what He wills and chooses

Hence, according to the above verse, it is clear that all creations are created by Allah SWT. However, the position and honour of the creations are not the same between one another due to the selection made by Allah SWT. For example, Allah SWT created time and at the same time choose selected time to be more honoured than the rest of it. Among them is the saying of Allah SWT:

Indeed, the number of months with Allah is twelve [lunar] months in the register of Allah [from] the day He created the heavens and the earth; of these, four are sacred. That is the correct religion, so do not wrong yourselves during them.

The four haram months are Muharram, Rejab, Zulkaedah and Zulhijjah. This is in accordance with a hadith narrated by Abu Bakrah where he said that the Prophet PBUH said:

Time has come back to its original state which it had when Allah created the Heavens and the Earth; the year is twelve months, four of which are sacred. Three of them are in succession; Dhul-Qa'da, Dhul-Hijja and Al-Muharram, and (the fourth being) Rajab Mudar (named after the tribe of Mudar as they used to respect this month) which stands between Jumad (ath-thani) and Sha'ban

Haram months means two things, firstly, these are the months where war is haram. Second, it means they are respected and honoured months.

Referring back to the question presented, we state that everything that is honoured or that is stated as advantageous to Allah SWT will surely has different rulings and rewards. For example, if one prays in al-Nabawi Mosque, he will get a greater reward than when he prays in other mosques except for al-Haram Mosque. This is as mentioned in a hadith narrated by Ibn Umar RA where he said that the Prophet PBUH said:

Prayer in this mosque of mine is better than a thousand prayers (observed in other mosque.) besides it, except that of Masjid al-Haram.

Whereas pertaining to the issue of whether sins in the haram months are greater when compared to other months, then here is the opinion of Imam Ibn Kathir in his commentary upon the above verse 36 of surah al-Tawbah. He said:

As Allah SWT forbid any transgressions (sinful acts) in the haram months. Even though they are prohibited throughout the year, but they are greater when committed in haram months. Refer Tafsir Al-Quran Al-‘Azhim, Ibn Katsir (1/545).

The same goes for rewards for good deeds committed in the haram months, they are greater when compared to other months. In fact, Imam Ibn Rajab al-Hanbali cited the opinion of Ibn Abbas RA which states:

Allah SWT honour four months and make them as haram months and makes them greater in honour. He also makes sins committed during these months are greater and good deeds as well as rewards (inside it) also greater (when compared to other months). Refer Latha’if al-Ma’arif, Ibn Rajab Al-Hanbali (pg. 115).

In conclusion, we state that the accurate opinion which states that rewards and sins committed in these haram months are greater and bigger when compared to other months. This does not imply that those sins or rewards are multiplied as understood by some people, but it refers to the phrase أعظم which means greater. Wallahua’lam.

Hence, let us together increase our good deeds as long as we are in the haram months as well as leave sins. Hopefully, this may be the reason for our istiqamah (consistency) in gaining taqwa towards Allah SWT in other months.

Lastly, we pray to Allah SWT to give us correct understanding in religion. Amin.