AL-KAFI #1657: THE RULING OF FRIDAY PRAYER DURING THE COVID-19 PANDEMIC 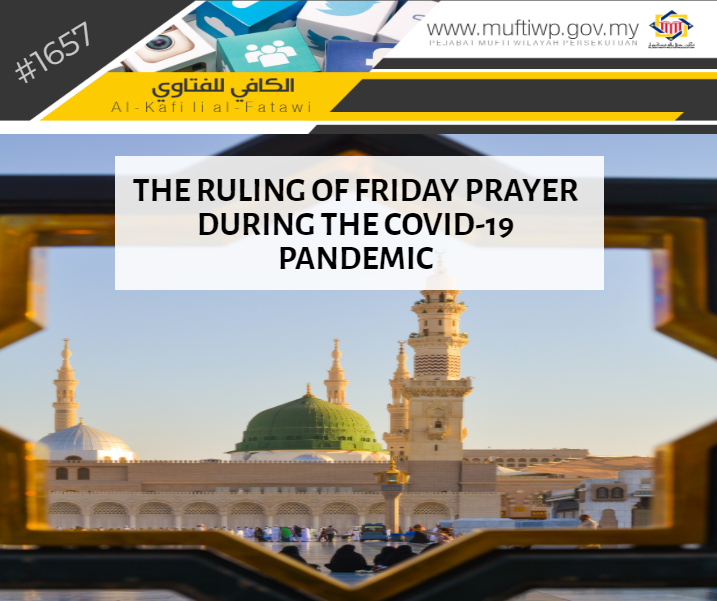 Assalamualaikum ustaz. What is the ruling of attending the Friday prayer in our current situation of the COVID-19 pandemic?

We start with the statement of Allah SWT:

The above verse is the evidence on the sanctioning of the obligation of the Friday prayer. Furthermore, the Friday prayer is also one of the special blessing specific for the ummah of the Prophet PBUH for them to attain the special honour of Friday. (See al-Fiqh al-Manhaji, 1/198)

The Friday prayer is a great worship and have numerous advantages. Among the advantages is the expiation of sins for the week. From Abu Hurairah RA, the Prophet PBUH said:

“The five (daily) prayers and from one Friday prayer to the (next) Friday prayer, and from Ramadhan to Ramadhan are expiations for the (sins) committed in between (their intervals) provided one shuns the major sins.”

The Friday prayer is an obligation for a person who fulfils the following seven conditions:

If a person fulfils all the above seven conditions, then it is wajib for him to perform the Friday prayer. (See al-Fiqh al-Manhaji, 1/200-201 and Matla’ al-Badrain (arranged by PMWP), 1/159)

For the above issue, we state the opinions from several Fatwa Bodies of Authorities, among them are:

We include the opinion of Syeikh Ali al-Qaradaghi who states: It is permissible to leave the Friday and congregational prayer in a situation where there is an outbreak of a virus and there is concern that people will get infected. He said the permissibility is on the condition that it is a valid fear and not just an assumption.

This is according to the statement of the Prophet PBUH:

“If anyone hears him who makes the call to prayer and is not prevented from joining the congregation by any excuse--he was asked what an excuse consisted of and replied that it was fear or illness--the prayer he offers will not be accepted from him.”

The fear is divided into three types; fear for himself, his property and his family members. Thus, according to what has been stated above, it is permissible to leave the Friday and congregational prayers during a disease outbreak (such as COVID-19) for it is something that should be feared.

However, the fear must be based on knowledge and certainty and not just presumptions (waham). The reason is, it is impermissible to leave something that is wajib except after ghalabah zhan (strong assumption). Or under the order or directive of ulil amri (government or ruler) and also the ikhtisas (experts of the field). [1]

Syeikh Muhammad al-Zuhaili states: “And every debilitation that is of the same level as the burden of sickness, is also considered as a debilitation that is analogically deduced as sickness on him. Thus, Friday prayer is not wajib on those who feared for his life or his property.” (See al-Mu’tamad fi al-Fiqh al-Syafie, 1/497)

According to the above discussion and opinions of scholars, we divide the issue into two situations:

First: In a situation where the COVID-19 epidemic is still under control according to the Ministry of Health Malaysia.

In this situation, the Friday prayer should still be performed following several conditions:

Second: In situations where the COVID-19 epidemic is no longer under control according to the Ministry of Health.

In this situation, it is permissible to leave the Friday prayer, but it is wajib to be replaced with the Zohor prayer at one’s own house. In this matter, there are several dhawabit:

May Allah SWT grant us knowledge and understanding in performing all His commandments. Amin.