AL-KAFI #1658: THE STATUS OF UNCLAIMED CHANGE AT PETROL STATIONS 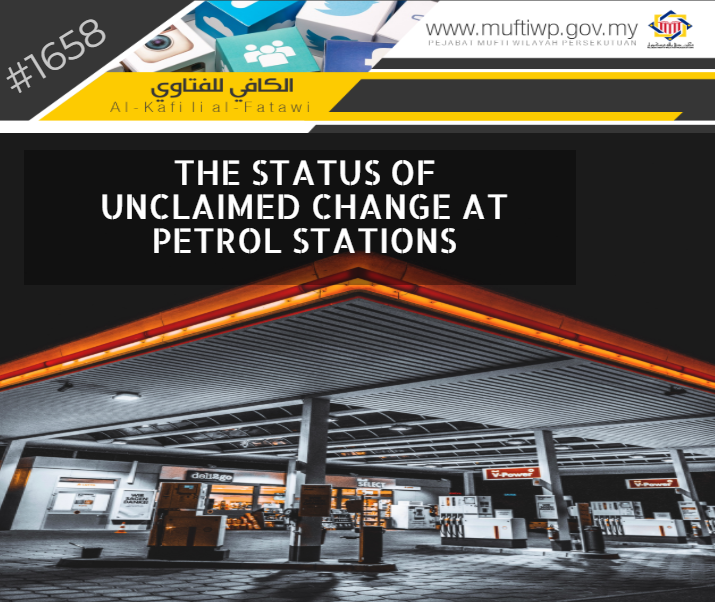 Assalamualaikum. I have a question. I own a petrol station in a certain area. I’m worried whenever my customers forgot or did not claim their change after filling their tanks.

For example, if my customer paid RM50 for fuel, then his car tank is fully filled when the meter read RM45. He has a right and should claim his balance of RM5 from the cashier at the counter.

Honesty in business is encouraged by Allah SWT and a commendable attribute in Islam. Among the basic principles of muamalat and any form of trade in Islam is to only buy and sell from among matters that Allah SWT has made permissible as well as only profiting in an honest and truthful way not through impermissible means.

“O you who have believed, do not consume one another's wealth unjustly but only [in lawful] business by mutual consent. And do not kill yourselves [or one another]. Indeed, Allah is to you ever Merciful.”

Imam Qurtubi Rahimahullah (died in 671 H) when commenting on this verse said that Allah SWT prohibited His ummah against eating, taking or profiting through impermissible or unjust means. Originally, any form of trade is included as permissible by syarak except if it contains other prohibited elements according to syarak. (See Tafsir al-Qurtubi, 5/150)

From this, the petrol station is also a business that is not excluded from this basic muamalat principle.

Regarding the status of unclaimed change (money), after customers have refuelled their tanks, there are several Islamic legal maxims that can be applied to determine the rightful person of the money.

First, one of the maxims states:

“A matter of which is accepted and practised in a society (its status) is the same as though it is based on evidences.”

This maxim explains that every deed and action that is unexplained by syarak whether it is halal or haram, valid or invalid, then the status of it depends on the practice of a certain society. If society considers it permissible then its ruling is the same as though there is evidence that ruled it permissible and vice versa. (See al-Mausuah al-Qawaid al-Fiqhiyyah, 2/538)

According to our observation regarding the custom of the society in Malaysia, any unclaimed balance or change left is considered as though it is given to the petrol station’s management even when the customers did not explicitly say this. Thus, the right on the change is transferred to the owner of the petrol station and it is halal for the management to use it.

In another maxim, it is stated:

“The decision of a person who stayed silent is not counted, however, in situations where a response in necessary then his act of keeping quiet is enough as an explanation.”

The above maxim explains that generally, if a person is silent on a matter, then we cannot assume that he agrees or disagrees on it. However, scholars have set that the silence of a person when he should not keep silent is an explanation as to whether he accepted or refused it. (See al-Mausuah al-Qawaid al-Fiqhiyyah, 8/1095)

If this maxim is applied, then customers who stayed silent and did not claim their change is considered to have agreed to give the balance money to the petrol station. The reason is the situation calls for an explanation from the customer for it involves his property with the addition of the factor of the custom of the society. Thus, when the customer stayed silent, he is considered to have given his change to the petrol station.

However, there is an exception for both of these maxims such as the customer asks back for his change, whether he asks it back right after he fills his tank or after some time because he forgot about it but then turned back to claim his change.

The exception for both these maxims is stated by scholars through another maxim:

“Considering a clear matter is prioritized compared to what is implied when both matters coincide.”

This maxim gives an exception when the custom of a society and a stronger and clearer argument coincide, then the clearer and stronger argument is prioritized. This is due to the fact that something which is clearly stated such as spoken words or speech is convincing while something that is just implied is categorized as doubtful matters. (See al-Qawaid al-Fiqhiyyah Wa Tathbiqatuha Fi al-Mazahib al-‘Arba’ah, pg. 154)

According to the above explanation, we can conclude several matters: