AL-KAFI #1659: THE RULING OF TAKING AN OATH USING TRANSLATED NAMES OR ATTRIBUTES OF ALLAH SWT 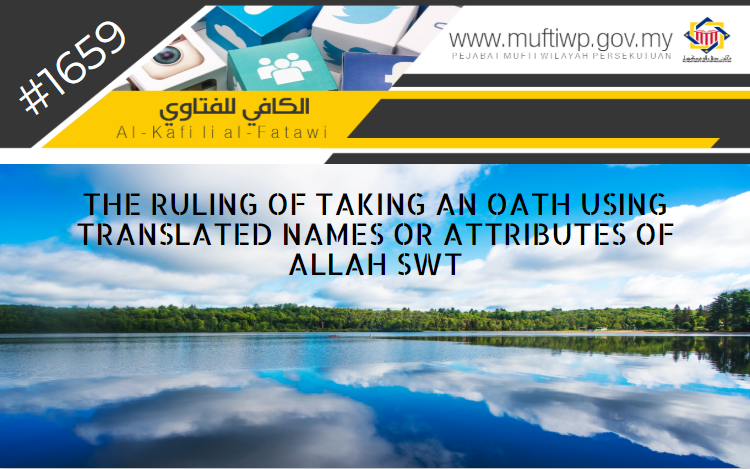 Assalamualaikum. What is the ruling of a person taking an oath using translated names or attributes of Allah SWT?

Oath in Arabic is al-Aiman (الأيمان), it’s the plural form of the word al-Yamin (اليمين). Basically, it means hand for in Arabic culture a person would raise his right hand when he is taking an oath. (See Taudhih al-Ahkam, 7/105)

While the term means strengthening something by the pronouncement of an oath because it is a presentation of an honour specifically. This is done by using one of the letters ba’, waw, or ta’ (Arabic alphabet). Which is by saying billahi, wallahi or tallahi which means “by Allah”. (See al-Qaul al-Mufid, 2/213 and Taudhih al-Ahkam, 7/105)

Oath must only be taken using the names of Allah SWT or one of His attributes. In a hadith narrated by Abdullah bin Umar R.Anhuma, the Prophet PBUH said:

"Whoever has to take an oath should swear by Allah or remain silent." (i.e. He should not swear by other than Allah.)

In answering the above question, an oath is taken using translated names or attributes of Allah SWT is valid and it is wajib for him to pay kaffarah if he violates his oath.

We present the opinion of Ibn Hazm among others who states: Oath does not happen except with the names of Allah SWT, whether it is by using one of His names or attributes He had taught us and it is meant as Allah SWT and not others. For example: ‘مقلب القلوب’ (the Overturner of hearts), ‘وارث الأرض وما عليها’ (the Heir of the earth and everything in it), ‘الذي نفسي بيده’ (by Him in Whose Hand my soul is), ‘رب العالمين’ (Lord of the worlds) and others.

Ibn al-Humam [1] al-Hanafi explained, if a Persian spoke in Fārsī ‘سوكندمي خورم بخداي’, then it is considered as an oath for it means ‘I’m swearing by Allah.’ (See Fath al-Qadir, 5/76)

Al-Hattab from madhhab Maliki emphasizes that anyone who swears by Allah, then afterwards breaks his promise, then it is wajib for him to pay kaffarah. (See Mawahib al-Jalil, 4/399)

Thus, an oath uttered in languages other than Arabic is valid.

According to the above evidences and discussion, uttering words that contains the meaning of an oath even if it is in another language, then the oath is valid. However, the prioritized way of taking an oath is for it to be in Arabic.

May Allah SWT grant us knowledge and understanding to obey all His commandments. Amin.

[1] He is Kamal al-Din Muhammad ibn Humam al-Din Abd al-Wahid or famously known as al-Kamal ibn al-Humam. He was born in 790 H.