AL-KAFI #1663: EXPERIENCE PAIN WHEN SITTING IN BETWEEN TWO PROSTRATIONS IN PRAYER: TAWARUK OR SIT WITH A SLIGHT CROUCH? 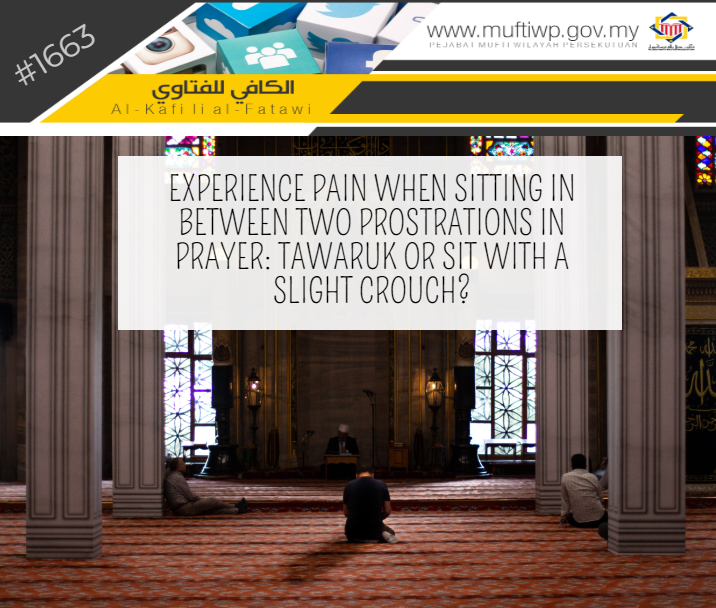 Ustaz, I would experience extreme pain in my feet whenever I sit in between two prostrations in prayer. I can only sit with a slight crouch where I will put my weight on my knees or sit the same way for the final tasyahud. Which position is prioritized for me to perform in prayer?

Syeikh Muhammad al-Zuhaili said among the valid conditions of sitting in between two prostrations are:

“I’tidal during the sitting is by straightening the back when sitting and it is insufficient with just raising one’s head or sit with a slight crouch except when there is a debilitation.”

Sitting in between prostrations is permissible to be performed in tawarruk form which means sitting just like during the final tasyahhud if there is an excuse such as if it is painful for him to do so, when a person is sitting in a position of which his right foot is upright and his right toes are folded forward towards the qibla while his left leg is folded towards his right leg and his bottom is placed on the floor or soil.

It is not makruh (undesirable) for the scholars of usul conceptualize the maxim:

“The makruh ruling is abrogated when there is a necessity,”

Thus, based on the above statement, then it is prioritized for a person who is unable to sit through iftirasy for the requisite of sitting in between two prostrations to sit in tawarruk position.

The second issue is, is it permissible to ‘sit’ as stated in the above fact, which is by raising the head after prostration but with a slight crouch, putting one’s weight on both knees because of pain in one’s toes?

We state, if there is a choice between ‘sitting’ this way and tawarruk, then tawarruk is prioritized. If there is no other choice, then the prayer is valid for there is a valid excuse and it is performed according to the person’s capability. Allah SWT states:

“So, fear Allah as much as you are able and listen and obey,”

“A commandment that is easy is not abrogated by something that is difficult,”

Which means if a mukallaf is unable to fulfil all the obligations that should be celebrated in worship, then do not leave the worship completely.

While from the ruling perspective, the validity of ‘sitting’ as stated above is discussed by scholars. The reason is it is not named as sitting according to the custom (uruf). Scholars have differing opinions regarding a person sitting by crouching or leaning forward but the inclination of his body is closer towards the limit of sitting rather than the limit of prostration. According to the majority of scholars it is invalid because it is not named as sitting straight. However, according to Syeikh al-Jauhari when he commented on matan al-Manhaj, it is valid for it is analogically deduced the same as standing. In the requisites for standing, a person is still considered as standing even if he is bowing slightly as long as it does not exceed the limit of rukuk (bowing in prayer), which is the position of which the palms can touch the knees. Whereas according to Imam Abu Hanifah, sitting in between two prostrations is enough when a person raises his head from prostration.

Hopefully, this explanation would give an understanding to the questioner. We pray that Allah SWT will grant us strength and ease in worshipping Him and accept our deeds. Amin.