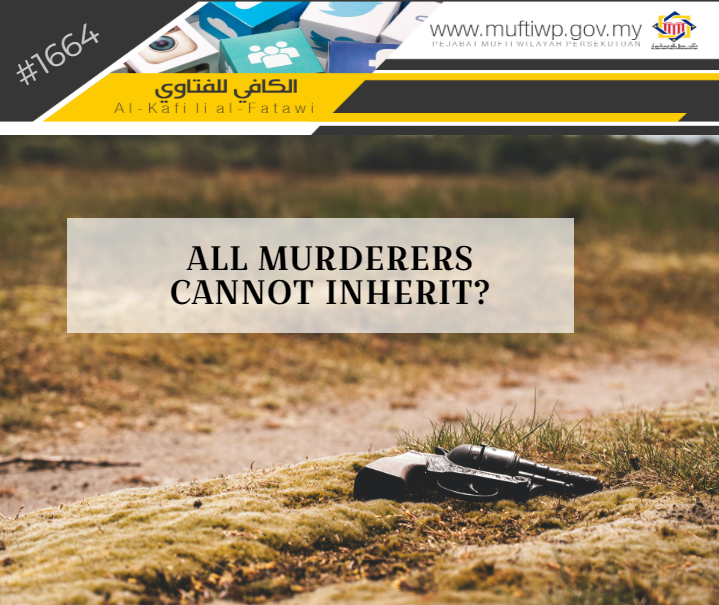 Assalamualaikum w.b.t, Datuk Mufti. I have a question on inheritance. I once heard a hadith which states that murderers cannot inherit. Can I know is it an absolute restriction on all murderers or is it only towards murderers that kill the testators? Hope for an explanation from Datuk Mufti. Thank you.

Through this verse, Allah SWT clearly states that each inheritor has the right over the inheritance of his/her parents and relatives (related to inheritance only). Imam al-Tabari cited that Abu Ja’afar said what is meant by this verse is for men their own share, and for women their own share of the same source whether they are a little or a lot, their obligatory, wajib, known and specific share for them (according to al-Quran and al-Sunnah). [See: Tafsir al-Tabari; 7/597].

Imam al-Rahabi states on this matter through his famous matn pertaining faraid:

And what hinder someone from the inheritance is one of the three reasons,

Hence, coming back to the above-presented question, pertaining to murder that prevents someone from receiving the inheritance, is it an absolute prohibition towards all murderers regardless of whether he killed the testator or someone completely unrelated to the inheritance?

The author of Fiqh al-Manhaji states in his book that a murderer cannot inherit the property of the one he murdered either he commit the murder with intention or not, by right or not. This includes when one ruled over a death penalty upon the deceased or gave support (tazkiah) towards the eyewitness.

This is in accordance with a hadith of the Prophet Muhammad PBUH narrated by Abu Hurairah RA:

The murderer will not inherit

Sheikh al-Mubarakfuri when commenting on this hadith said that it is a dalil on that a murderer will not inherit the property of the one he murdered either it is from القتل الخطأ (murder by mistake) or القتل عمدا (intentional murder) and this is the opinion of many scholars. [See: Tuhfat al-Ahwazi; 6/242].

There is nothing for the murderer

This hadith also a dalil towards the statement that a murderer shall not inherit the inheritance of the deceased (the one he murdered). Sheikh Muhammad al-Zuhaily stated in his book if an heir murders the owner of the property, then he is restricted from receiving the inheritance; either it is intentional or unintentional murder, direct or indirect (a cause towards it) like the ruling on the death penalty over the person, or being the eyewitness which cause the testator to be sentenced with the death penalty, by choice or force, either he is a mukallaf or not, in accordance with the general meaning of the above-mentioned hadith. [See: al-Mu’tamad fi al-Fiqh al-Syafi’i; 4/355-356].

Among the reasons and wisdom of impediment towards the inheritance upon a murderer is because murder is something that is able to break a relationship and this relationship is one of the reasons one becomes an heir to another. [See: al-Fiqh al-Manhaji; 5/78]

Besides, this is also according to a famous Islamic legal maxim:

“Whoever rushes a matter before its time, he is punished by being impeded from getting it”

This maxim is clear that the murderer wanted to rush in getting his inheritance through murder. Hence, he is obstructed from having it.

An Heir May Still Inherit the Property of a Murderer

In this matter, an heir (the one who is murdered) may still inherit the property of the murderer. For example, an heir wound or injures his testator, then the doer (the heir who wounded the testator) passes away. Then, the wound he caused before causes the death of the testator. In this situation, the one who was injured (the testator) may inherits the property of the one who caused the injury upon him (which then will be testified as murderer). This is because there is no hindrance which hinders the one who got injured from the inheritance as long as he is alive during the death of the injurer (as they are the heir to each other).

In conclusion, murder meant in this hadith is a murder specifically related those who have the relationship towards the inheritance which could cause that relationship to break. Hence, if someone is a murderer, but not due to killing his relatives, then he can still inherit the property of his relatives. Therefore, the murder meant in this hadith is absolute towards all types of murder either intentional or not, but only when it is related to the people in the inheritance. Lastly, we pray to Allah SWT to give us understanding in His religion, bless us with ease and honesty in performing worship as well as bless all our actions.