AL-KAFI #1666: HOLDING A WEDDING RECEPTION DURING THE MOVEMENT CONTROL PERIOD 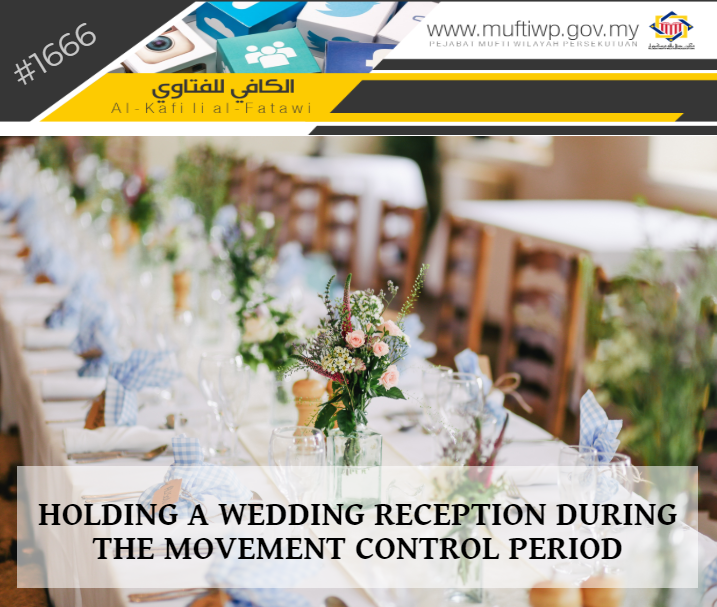 According to the book al-Fiqh al-Manhaji, al-walimah originates from the word which means assembly or gathering. It is named as such because the couple, both the husband or wife will gather at it (wedding reception).

Furthermore, it is stated that al-walimah is the feast at the wedding or all food prepared for invited guests and other people. Refer Al-Fiqh al-Manhaji (2/92)

Generally, attending a wedding ceremony is something that is commanded. And as we all know, every imperative clause in al-Quran and al-Sunnah carries the ruling of wajib, unless if there are indications which changes the ruling. The opinion which states the obligation to attend a wedding ceremony is the opinion of the jumhur (majority of scholars). They based their opinion from a hadith from Ibn Umar RA where the Prophet PBUH said:

When anyone of you is invited to a feast, he should attend it

Imam al-Nawawi in his comment on the above hadith said: “The most sahih opinion in our madhhab, the ruling of attending marriage ceremony is fardh ‘ain (individual obligation) for those invited, but it will be lifted due to some excuses as the following:

The same goes for other excuses as mentioned by Dr Wahbah al-Zuhaily: “Among the excuse that may lift the obligation of attending an invitation is road congestion, heavy rain, potholes, sickness and etc”. Refer Al-Fiqh Al-Islami wa Adillatuh, Al-Zuhaili (9/6622).

Hence, coming back to the question presented, we state that each excuse that prohibits someone to attend the mosque’s congregation is the same excuse for one not attending a wedding ceremony.

The same goes for when an order is issued to practice Movement Control which includes total prohibition of mass gathering across the country including religious, sports, social and cultural activities. This includes wedding ceremony, tahlil, congregational prayer in masjid and etc. as mentioned by the Malaysian National Security Council. So, this order is wajib to be followed according to the saying of Allah SWT:

O you who have believed, obey Allah and obey the Messenger and those in authority among you.

The in-depth explanation on the Movement Control Order set by the authorities may be referred in Irsyad Al-Fatwa Siri Ke- 457: Wajibkah Mengikut Arahan Pemerintah Untuk Tidak Pergi Ke Masjid? (Irsyad Al-Fatwa Series 457: Is It Wajib to Follow the Directive of the Government to Not Go to The Mosque?) that can be read through the following link: https://bit.ly/2UdbvXa

Thus, we conclude this statement into the following points:

Lastly, we pray to Allah SWT to give the correct understanding for us in religion. Ameen.